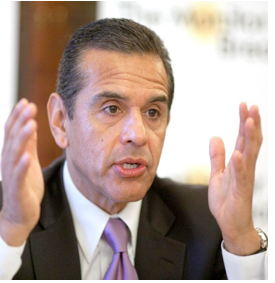 INSIDE CITY HALL - This column is about the corruption of civil service in Los Angeles. It identifies five problems that make effective Human Resource Management impossible — five problems that drive up the cost of City government.
The basic problem is that Mayor Villaraigosa refuses to enforce Charter provisions related to the City’s personnel function. By ignoring Charter Sections 540 and 541, the Mayor wrecks civil service, empowers himself, and tears down a legal firewall designed specifically to limit political influence in City Service.

A second problem is that the City Council ignores its duty to oversee the City’s personnel function. That duty is clearly stated in Charter Section 242(b). By refusing to do its duty, the Council leaves the Mayor — a career politician — with easy access to 50,000 City jobs.
A third problem is that the Board of Civil Service Commissioners is not allowed to do what Charter Section 541 requires it to do. The Board is, in fact, vested with the power and duty to make and enforce the civil service rules, to oversee the civil service system, and to investigate rule violations.
But current Board members were appointed by Mayor Villaraigosa; they were advised that Section 541 is no longer being enforced. Thus, a proposed rule to standardize the working test was not even considered, existing rules are not being enforced, rule violations are not being investigated, and the City’s employment practices are no longer subject to effective oversight.
A fourth problem has to do with the Personnel Department. Charter Section 540 vests that Department with the duty to administer the City’s civil service system. By ignoring this Charter Section, Mayor Villaraigosa leaves Los Angeles with no one in charge of civil service.
A leaderless Civil Service System? Angelenos find that worrisome. But it’s not at all worrisome to City Hall politicians. They know civil service has been relatively leaderless since 1993. That’s when Richard Riordan seized City Hall, and with no public notice, subjected the system to a radical make-over.
A final problem is that the Riordan Paradigm lets City departments manage themselves. Department heads are free to mismanage their employees; they’re free to use invalid employment tests and phony performance appraisals. They’re free, in fact, to waste our tax dollars.
But we constituents are also free. We have a right — a duty — to tell our Mayor we expect city service to be managed more effectively!
(Samuel Sperling is a City Hall watchdog who writes for the Tolucan Times where this column was first posted. Check out other writers and reporters … including Greg Crosby … at tolucantimes.info) You can reach Samuel Sperling at: [email protected]) –cw
CityWatch
Vol 10 Issue 90
Pub: Nov 9, 2012