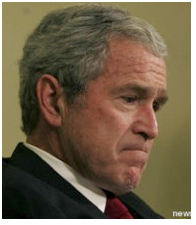 ELECTION 2012 - Rising prices and chronic unemployment were heavy on the minds of voters Tuesday even as a glimmer of optimism peeked through. Four in 10 said the nation’s battered economy is getting better.

Most everyone agreed there’s still far to go. They were less likely to blame President Barack Obama for the economic troubles, however, than to point the finger at his predecessor, George W. Bush, according to preliminary results of a national exit poll.
Only a fourth thought they were better off financially than four years ago when Obama was elected in the midst of the worst economic collapse since the Great Depression. Voters were most likely to say their families were doing about the same, and Obama led among that group.
(Read more)
-cw
CityWatch
Vol 10 Issue 89
Pub: Nov 6, 2012