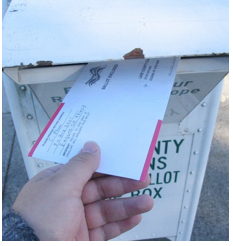 VOICES FROM THE SQUARE - Let me start by saying this: I am a Catholic. As an adult, I converted to Catholicism—despite my hostility to the institutional Church as a protector of power and patriarchy—for a very specific reason: a deep craving for public ritual.

I am a believer—at an almost cellular level—in the importance of creating sacred occasions to drag ourselves out of our private experiences, to connect to the past and the future, and to call upon our collective better angels. I believe that the repetition of words and gestures in the presence of friends and strangers renews a sense of communal obligation.

So when Oregon went to an all vote-by-mail system in 1998, I resisted. I told friends that I hated voting by mail. I insisted on walking my ballot down to elections headquarters on Election Day to fulfill my bodily and spiritual need to ritualize the act of citizenship.

There are others who, like me, fought the change. We miss chatting with the blue-haired ladies and wearing the “I voted” sticker all day. As my husband put it, “I miss pulling the curtain behind me and privately voting in public.” We mourn the loss of the thread of connection with other citizens and with a tradition of voting. Our parents and grandparents voted in polling places, so why not us?

But a solid majority of my friends and colleagues love the vote-by-mail system. They like the convenience of being able to vote when they have time. They talk about the issues and the candidates with their family members and loved ones over coffee and wine. They say they feel like better-informed voters because they can research each race as they go through the ballot, and they never have to guess on a judicial election or an obscure charter amendment when they’re locked in a voting booth without access to Google.

My friend Phil Keisling, Oregon’s former secretary of state and a national leader in the vote-by-mail movement, calls my resistance—very gently—“misguided sentimentality.” He argues that the essence of democracy is not anachronistic ritual but maximum participation. Oregon and Washington, the only two exclusively vote-by-mail states, consistently post some of the highest voter turnouts, particularly in primary and off-year elections.

Of course, this makes me feel like a granny pining for the rotary dial phone or the metallic taste of well water. Who am I to miss my little sticker when there are mothers with four kids working two jobs who don’t have time to go chat with volunteers from the League of Women Voters? Who am I to oppose a democratic innovation that strengthens self-governance? As Phil sweetly suggested to me,
“Now that we have worked on participation, we can create new rituals.”

Indeed, after 14 years, people have done just this. Some people have dessert with friends and fill out their ballots together. Many people vote with their children, answering questions and puzzling through the issues together. And many, many of my friends have created tender moments with their sweethearts over the mail-in ballot.

But here’s the trouble. Those are private rituals. I love private rituals. I believe in lovers and parents and families anticipating and repeating gestures that mean something to them. But I am mourning the public ritual—a shared sense of duty, an act of common purpose fulfilled together whether we know each other or not.

Maybe my fellow Oregonians are right, and I am trying too hard to make sacred the essentially unsacred act of voting. Maybe elections just don’t deserve that kind of solemn observance. At best, elections have become transactional—individuals are called on to calculate which candidate or measure benefits them the most personally and then vote accordingly. We are asked to wear the familiar and well-worn T-shirt of the consumer and rarely—if ever—to dust off the Sunday hat of citizenship.

At worst, elections have become spectacles—sideshows distorted by money and bare-knuckled power plays and petty distractions. Nothing is out of bounds. It is expected that candidates and advocates and ordinary citizens—for that matter—will lie, defame, and manipulate to win. If that’s the case, there is no sacred flame to fan.

And by that, I don’t mean to criticize vote-by-mail or widespread absentee voting or early voting or same-day registration or any other innovation to maximize participation. The logical response to concentrated power and a system marinating in money is massive, popular participation. One bulwark against well-funded and cynical manipulation is to make voting as easy and simple as possible, felling every conceivable barrier, even the ones that whisper to our civic angels.

But my attitude about this is not so different from my feelings about the Church, tarnished by greed and entrenched power and callous abuse of the innocent. These days, it feels a little bombed out at the center, so when I have the choice I admit I most often choose my private ritual of strong coffee and the Sunday Times. But I still love the idea of kneeling with my fellow parishioners in the church of Dante, even if I don’t do it that much anymore.

In the same way that I will show up to Mass today—All Saints’ Day—to sing the Litany of Saints with my neighbors, I will carry my ballot around in my purse until the following Tuesday—the first Tuesday after the first Monday in November. I will walk down to county elections headquarters and greet poll workers and fellow citizens alike. I will breathe deep the bustle of occasion. I will drop my ballot into the puce mailbox outside on the sidewalk and whisper to myself: Wendy Willis has voted.

(Wendy Willis is a poet and essayist living with her family in Portland, Oregon. She is the Executive Director of the Policy Consensus Initiative, a national non-profit organization devoted to democratic and collaborative governance. Her first book of poems, Blood Sisters of the Republic, was released by Press 53 this month, and her work is available at wendywillisdotme.wordpress.com. This piece was posted first at zocalopublicsquare.org)
-cw