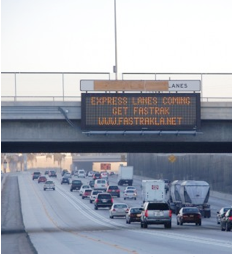 OUT OF THE FRYING PAN - Starting on November 10, Los Angeles will begin a one-year experiment to convert High Occupancy Vehicle (HOV) lanes, better known as carpool lanes, to High Occupancy Toll (HOT) lanes on two major freeways. Toll lanes are not new to California drivers, but this is the first time we will see these lanes on LA’s busiest freeways.

The HOT lanes will allow lone drivers to access the current carpool lanes on the I-10 (beginning early 2013) and I-110 (November 10) freeways by paying a toll that changes based on the current level of traffic. Drivers who utilize carpools, van pools, buses and motorcycles will continue to access those lanes for free. (For more information on all the rules and details, check out Metro’s handy-dandy FAQ page.)

Metro argues that HOT lanes will reduce congestion in the regular lanes, and that all revenue from freeway tolls will go directly to fund improvements to public transportation and roads near the freeways where tolls are collected.

Research conducted by the federal Government Accountability Office (GAO) suggests that in all cities utilizing HOT lanes, travel time and speed improved on at least some sections of the freeway, in some cases as much as 14 minutes in HOT lanes and 11 minutes in free adjacent lanes.

The transition is not without controversy. In order to make the system work, Metro has required all travelers using the HOT lanes to purchase and use a transponder. With no toll booths, if you happen to find yourself on the I-110 heading towards downtown on date-night, you will not be able to just jump into the carpool lane. Also, drivers must “self-declare” the number of occupants within a car before the trip begins, creating a difficult enforcement environment.

In my family, my mom and I take public transportation to our jobs downtown via the I-110, but on occasion we find ourselves needing to drive. Deciding whether or not to purchase the transponder has been a difficult one. Some months we take the bus every day, but just this week we had to drive and utilized the carpool lane. We saved approximately 20 minutes. We have to decide whether or not to pay the extra $3 inactivity fee or take our chances in the regular lanes even though we carpool.

In addition, some lawmakers argue that toll lanes create an unfair system where those with the income to spend an additional $2,000-$3,000 per year can speed past the rest of LA’s commuters.

The Los Angeles Times reported that Rep. Maxine Waters (D-Los Angeles) called it the “traffic system of haves and have-nots.” The initial setup cost alone of the transponder ranges from $40 to $75. Metro has indicated that an average trip, end to end, will cost about $6 on the I-10 and $4 on the I-110.

Research from the Government Accountability Office and local reports from the state of Washington and California suggest that HOT lanes do impact low-income communities but that the effects may be minimal depending on local conditions.

● A usage study indicated that drivers of all incomes used the HOT lanes and that a majority of commuters at all income levels do not use HOT lanes every day. However, another study suggested that high-income drivers used them more often than low-income drivers.

● Washington State’s research suggests that some low-income families “choose to pay for HOT lanes to get to work on time, to keep childcare costs down, and to make appointments on time without taking as much leave from work.”

● Moreover, the Washington research demonstrates that low-income drivers are potentially disproportionately impacted, primarily based on the usage of bank accounts, credit or debit cards, commonly used to bill for HOT lane use.

Metro officials cite their first-of-its-kind “Equity Program” for low-income residents. The program gives low-income families a one-time $25 credit to be used towards the purchase of a transponder or towards toll pricing. Low-income families also qualify for a waiver of the $3 inactivity fee, making occasional usage more accessible.

Metro further points out that all gross toll revenue will be reinvested into improvements in public transportation. This includes an increase in frequency of the Silver Line Busway that travels the I-110 from the Artesia Transit Center to the El Monte Busway via Union Station.

The HOT lane debate will no doubt heat up even more next month when carpool lanes open for the first time to lone drivers. Will the HOT lanes reduce congestion? Will they be fair for all commuters? Stay tuned.

(Ashley K. Thomas is a research/policy analyst with LAANE’s Construction Careers Project. This column was posted first at fryingpannews.org)
-cw