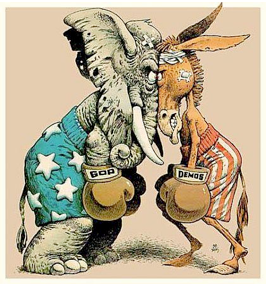 POLITICAL CRYSTAL BALL - Without fail every four years many progressive friends share their reasons for supporting candidates, typically a Democrat running for President, with whom they have substantial disagreements.  From election to election negative campaigning sways these friends, and they invariably trot out the current version of the lesser evil argument.  I do wish they would step back and take note of the repeated disconnect between campaign rhetoric and what politicians, whether at City Hall, Sacramento, or Washington, DC, undertake once in office.

But, the lesser-evil voters should also go a step further and realize they can reliably predict the policies and programs of the winning candidate before the election results are even known.

How?  They only need to look at their long list of disagreements with the lesser evil party they intend to vote for.  In nearly every case their list corresponds to a broad consensus on a wide range of issues between the Democrats and Republicans at all levels of government. Voila!  Most of the policies of the next administration are there before their own eyes.

This list of bi-partisan consensus is long, so bear with the top 15, realizing that many other categories could have been added:

1.    Current wars and conflicts in Iraq, Afghanistan-Pakistan, Yemen, Somali, Mali, along with saber rattling and preparations for war with Iran.

3.    Sympathy for military families and/or the troops instead of directly supporting the Iraq and Afghan-Pakistan military occupations they must fight in.

4.    Extensive diplomatic and spying assistance for repressive foreign regimes, past and present, in particular Saudi Arabia for its role in the Persian Gulf and Israel for its control of the West Bank and Gaza.

5.    Massive arms sales abroad, in particular to these and many other regimes, especially in the Middle East.

6.    Failure to prosecute any Wall Street banksters or Bush-era torturers.

7.    Government sanctioned and organized political assassinations (including of US citizens), through remotely controlled drone missiles.

9.    Massive domestic surveillance, including archiving all phone calls and emails, as well as assigning undercover agents to mosques and anti-war groups.

10.    Routing Occupy movements in city after city with massive show of police force late in the evening, most notably in New York, Oakland, Chicago, and Los Angeles.

14.    Deregulation of private investment, including the stock market and real estate.

Fast-tracked extraction of oil, gas, and coal, including fracking of shale, arctic drilling, tar sands, and deep water drilling in the Gulf of Mexico.

The other critical part of the picture is the huge amounts of money spent on long electoral campaigns that nevertheless result in small voter turnouts.  Why, though, does this hyper-campaigning get so little traction among potential voters?   The reason is that an election choice between two candidates who agree on so many issues makes many voters and occasional voters cynical and apolitical.

But the cynics need to realize that there are many ways to be politically active once an election is over.  The sky is the limit for them for them to devote time to unions and community groups, get out on the streets for important issues, go door-to-door with petitions, write and publish local newsletters, participate in governmental hearings, and much more.

(Vic Rothman is a political and community activist in Los Angeles.)
-cw