Details
LAPPL Board of Directors 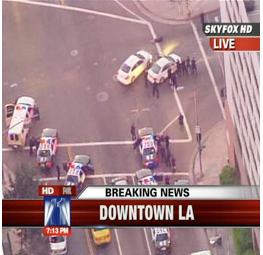 MEDIA POLITICS - Over the past few days, media coverage of police chasing dangerous felons in the southland have put thousands of people, including dozens of police officers, in extreme danger.

Police chases and the aftermath are certainly newsworthy, but the recent live television coverage has had the feel of a sporting event – with accompanying colorful commentary. In these situations, the responsibility lies with the suspect for not submitting to arrest, the public to stay out of the way, the officers to use good judgment when in pursuit and the media to limit its coverage.

We aren’t questioning the news value – when it’s over – and in some cases as a warning for public safety, but many times, and clearly in the latest incident, live coverage endangers the public.

On Tuesday, live television coverage of an LAPD pursuit of a murder and carjacking suspect nearly resulted in the viewing public being “treated” to the sight of that criminal attempting to kill police officers, and then falling to the ground after being struck by return fire. What exactly is the value to the public, more importantly our young people, to witness this event live and in high definition?

Yesterday brought live broadcasts of armed robbers being pursued by Los Angeles County Sheriffs from Santa Clarita all the way to the south end of the city. As commentators breathlessly announced the locations of the pursuit, citizens poured from their houses to watch the spectacle.

The armed robbers threw cash out of the car during the chase, resulting in people dashing into the streets to collect the money and hundreds of people converging on the vehicle at the end of the pursuit.

The coverage added to the chaos, which resulted in needless additional risk to the Los Angeles County deputies, Los Angeles police officers and the public, in what was already a dangerous situation.

Live television coverage of the chase only exacerbated the situation, as people watching were alerted to the direction of the pursuit and flocked out of their homes to gawk or grab some of the discarded money.

Pursuing sheriff and LAPD units then had to contend with people in the street as well as the criminals they were chasing.

The media coverage was similar to that of a sporting event. Without the live coverage, far fewer people would have known about and become involved in this chase, tried to grab the stolen loot and put themselves in harm’s way.

Lengthy coverage of cars being pursued by the police up and down the streets and highways in the hopes of some dramatic conclusion may gain viewers for the stations, but for the sake of public safety, news organizations should report on police chases in as much detail as they want when the chase concludes.

If the media recognizes a need to warn viewers of a pursuit for the sake of public safety, it should do so with a conscious decision to limit the live coverage for the same reason. Otherwise, the news broadcast “money shot” isn’t reporting, it’s irresponsible.

(This commentary was provided and written by the LA Police Protective League Board of Directors. The views expressed are those of the LAPPL Board.)
-cw