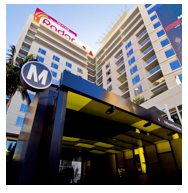 HOLLYWOOD MINUS THE HYPE - Here’s Hollywood’s Billion Dollar Real Estate Fraud: “Hollywood is growing by leaps and bounds, and by 2030, Hollywood will have almost 250,000 people which is an increase of 52,000 people.”

Hollywood’s decline correlates with the number of new CRA Projects.  In brief, density causes deterioration.  The hypesters would have you believe otherwise.  They are adept at the old propaganda trick of pretending their worst liability is your greatest asset.

The HCP, for example, proclaims that the subway has revitalized Hollywood.  That pronouncement has validity only if “revitalize” means “eviscerate.”  All one needs to do to see the Big Lie in this assertion is to look at the three subway stations with CRA Projects on top of them.  All three are a financial disaster.

(1)  Hollywood-Highland, which sits on top of a subway station, cost $625 Million to construct and then was sold to CIM Group for only $201 Million and the City then had to kick in another $30 Million to entice CIM Group to take over the disaster.  If the subway “revitalized” Hollywood-Highland, the project would not have lost nearly $1/2 BILLION.

(2)  The Hollywood-Western Metro Station, which sits on top of another subway station, has been unable to rent ½ of its retail space since it opened about 12 years ago.  Remember the promise/lie of the CRA?  The retail sales taxes will compensate for the loss of incremental tax revenue.  Really?  50% of the space has always been vacant. 25% of the space is rented to a bank, which has retails sales of $0.  The other 25% houses a used clothing store.  How many centuries will it take for sales tax revenue from Out of the Closet to compensate for the loss of property taxes?

(3)  Most recently we see the fiasco of the W Hotel and condos which were foolishly built on top of the Hollywood-Vine Metro station.  The sales stats seem to be a state secret, and no wonder if it is true that only about 15% of the condos have been sold.

Despite the hype and cover-up, all three projects have been financial disasters, but as long as the City bails out the developers and their bankers like the feds bail out Wall Street, there is no reason to stop the hype.  Or is there?

The CRA carries $3,028,921,563.93 in debt, that is over $3 BILLION in public debt.   The Hollywood developers are exhausting their  source of cash – tax dollars.  So even if they let loose with a torrent of campaign cash to buy the mayorship for Garcetti, the tax payers are tapped out.  Legalized bribery under the Citizens United Case can go only so far.

While it is easy to bribe politicians, it’s hard to bribe the Laws of Economics.  If Economic Laws were bribeable, then the Crash of ‘08 would not have occurred.

One Immutable Economic Law is Bubbles Burst!  Since hot air causes bubbles to expand, The Hollywood Community Plan is the hot air keeping the real estate fraud afloat.  The fraudsters cannot admit that Hollywood has been steadily losing population and that its SES has also been falling – what fool would invest billions of dollars in a falling market?  Thus, The Hollywood Community Plan declares that Down is Up.

Yes, the verified 20 year trend of decline, which has vastly accelerated under Garcetti’s tutelage, is proclaimed to be an Upward Trend that will add an additional 50,000 people in the next two decades.

Who will be the dupes?  Here’s how it appears to be shaking out.

Developers familiar with the disaster of Hollywood’s commercial real estate market are desperate to pawn off their mistakes on others.  Hence, a massive real estate fraud is required to stave off the burst a little while longer.

Who would think that the City itself would be a party to a massive real estate swindle to lure foreign investors to sink a billion or two into the Hollywood commercial real estate market?  People who are familiar with Hollywood, but most people are not.

Investors from Hong Kong, Tokyo, Moscow, Riyadh know from nothing about Hollywood – except what they see in the movies and read in the Hollywood Community Plan.  How many Asian billionaires were sold a bill of goods about Hollywood when the mayor was on his latest Asian junket?

According the buzz in the hallways outside the City Planning Commission hearing on December 8, 2011, there are “hundreds of millions of foreign dollars just waiting for the Hollywood Plan to be approved” so that they can buy into Hollywood’s real estate boom.

The Hollywood Community Plan is based on hypotheticals (a polite word for “gross misrepresentations”) and not on facts.  That is the fastest way for the courts to throw out a community plan.  Communities for a Better Environment, v. SCAQMD, ConocoPhillips Company, (2010) 48 Cal. 4th 310 and Sunnyvale West v Sunnyvale City Council, (2010) 190 Cal. App. 4th 1351.

The HCP did not consider the Down Zoning Alternative.  While Garcetti and his developer buddies see the objective of an EIR as providing gargantuan profits to real estate developers, the word “quality” in California Environmental Quality Act [CEQA] refers to the Quality of life of the people who actually live here.

Subways are designed to make money for the contractors, but the population of Los Angeles falls far, far short of being able to support a subway.  Thus, each subway calls for a Transit Oriented District [TOD’s] with mega-density.  As Los Angeles has known since 1915, density drives people out of Los Angeles.  That is a 100 year trend which Garcetti and the CRA also would like to conceal.

What foreign and local investors often do not understand is how dumping billions into CRA mixed-use projects caused a population decline.

Property tax dollars which have been siphoned off to the CRA are not available to up-grade infrastructure.  As the roads deteriorate, as traffic congestion mounts, as the water mains routinely break, as police services are reduced, as crime increases, as antiquated sewers become filled, and as fire stations are slashed to make room for more mixed-use developments, people with the financial means to flee.  They actually leave Hollywood for less dense areas.

That is why we have not only fewer people but those who stay have a lower socio-economic status.  That in turn makes Hollywood less liveable and more people depart and the down spiral which Garcetti and the CRA touched off have become self-generating.

What will burst the bubble?  Who knows? Lawsuits are great bubble bursters, and the lawsuits are already being written.

(Richard Lee Abrams is an attorney in Los Angeles. He can be reached at: [email protected] ) –cw