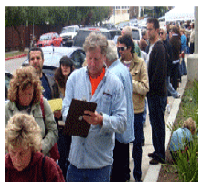 OUR CITY - There has been some troubling discussions taking place in the world of neighborhood councils.


For some time now, the Board of Neighborhood Commissioners (BONC), and others at City Hall, have been talking about mandating certain types of training for neighborhood council board members.

Treasurers and those who handle the city’s money must understand the rules and how to stay out of trouble.  That’s reasonable training, and it benefits everyone.

State law requires board members to take a two-hour training session about ethics, although it has very little to do with how to act ethically.

Despite the fact that neighborhood council board are volunteers with a limited amount of time to devote to their council after family, work, and religious commitments have been met, some city officials still believe that their advisors should be forced to attend classes about parliamentary procedures, civics, community leadership, and on and on.

The realistic problem is that the more difficult City Hall makes it for people to participate in neighborhood councils, the less likely it will be that anyone will sign up.

The philosophical problem is that there is no reason to raise the bar higher for the advisors than it is for those they advise.

No elected city official, commissioner, or city employee is required to be trained in anything more the state’s ethics laws and sexual harassment.

What City Hall has failed to do is develop meaningful and convenient training in these areas.  If they had, people who wanted to be good leaders would be taking them voluntarily.

At national conferences attended by people who are devoting their lives to promoting public participation in government, a goal etched in our City Charter, Los Angeles is rarely held up as a place where community empowerment flourishes.  Ours is seen as a system where City Hall wants to regulate the councils more than empower them.

And we were supposed to be the cutting edge of participatory democracy.

Now some city officials are talking seriously about a new regulation that would knock a neighborhood council out of business if 1% of the registered voters didn’t turnout at its elections.

This is an inconceivably bad idea, and I’m going to run up against the word limit for this column in an attempt to explain why.

The City Charter is laced with words like “assist” to describe what the role of DONE is.  But it’s much easier to legislate away a perceived problem than it is to work toward a mutually-beneficial solution.

Before City Hall decided that the City Clerk should run the neighborhood council elections, there were many fantastic turnouts, especially when compared to City Council elections.

The Downtown Los Angeles Neighborhood Council held elections on different days in order to reach the workers and residents.  At one election 1787 voters showed up.  Compare that with the 776 who voted in next city election.

The Watts Neighborhood Council convinced 1104 people to vote in the same month that the area’s turnout was a paltry 294 for those on the City’s ballot.

Grass Roots Venice (as it was known then), Northwest San Pedro, Atwater Village, and Elysian Park Riverside all had turnouts that beat the City elections.

But the grand prize went to the Historic Cultural Neighborhood Council that had election turnouts of 2199 and then 1899 in consecutive elections.  This compared to 299 people who voted when the government asked them to.

People will vote if you give them a reason to do so.  These councils were successful in creating that need.  They succeeded where government failed.

Once the City Clerk sucked up all the money that had been used for outreach for the high-cost of its election management, City Hall began to lose interest in the neighborhood councils.

The “new and improved” DONE website (www.empowerla.org) should be the central location for the promotion of the councils.  But you can’t even find anything there that explains what the councils are about, what they do, or how they do it.

The website used to include all newspaper articles about neighborhood councils; a list of their best practices and most outstanding accomplishments; a chart showing all the election results; professionally produced 30-minute training and promotional videos; and transcripts and notes from each of the Congress of Neighborhoods workshops so people who weren’t able to attend could benefit from them.

Without explanation, all that was deleted, but it could easily be reposted.

(Greg Nelson participated in the birth and development of the LA Neighborhood Council system and served as the General Manager of the Department of Neighborhood Empowerment. He also served as Chief of Staff for former City Councilman Joel Wachs. Nelson now provides news and issues analysis to CityWatch. He can be reached at:  gregn213@cox.net .) –cw