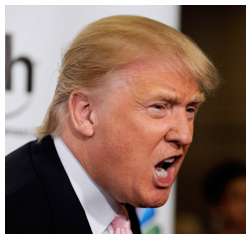 AT LENGTH-Donald Trump’s meteoric rise in the polls for the Republican nomination for the presidency is no wonder. His rhetoric in recent months—whether it was his connecting Mexican immigrants to crime or his comments on Sen. John McCain (R-Ariz.), saying he is not a hero “because he was captured” and “I like people who weren’t captured”—has been tapping our nation’s darkest, deepest and most xenophobic veins.

Trump’s message and his refusal to apologize when he’s called out on his racism goes along with the narrative that supposes the United States is weak, and if elected president, he’d “make America great again.” In this context, filled with fear and anxiety following unimaginable acts of terror, his blustery, bullying rhetoric is excused. And, the corporate media is to blame for it.

Trump is a ratings magnet. The corporate media fawns over him because every time they give him airtime their ratings rise.

It took Trump’s call for a ban on all Muslims traveling to the United States (even if they are already U.S. citizens) in the wake of the San Bernardino mass shooting for the so-called “liberal media” to call him a fascist.

What took them so long?

The Philadelphia Daily News recently ran a cover picture of Trump with his arm raised in a gesture similar to a Nazi salute with the intentional inference made clear with the bold headline: The New Furor.

Even his own party and Republican political strategists are finally calling this what it is. Republican House Speaker Paul Ryan, no liberal by any stretch, said, “The notion of banning all members of one religion from the country is not what this party stands for…. More importantly, it’s not what this country stands for.”

What took him so long?

Clearly, The Donald doesn’t represent the banner the Grand Old Party is flying, yet he is making them all look worse because of it. However, he does represent a growing sentiment in this country that is driven by fear and anxiety of the “other”—whomever the other may be this month.

It is a sentiment that echoes in nearly every part of this nation that demonizes the weakest or the most vulnerable. It is also one that has historic precedent in this nation. We can only wonder who the next target will be.

In the end, Trump jeopardizes the core values of the American creed of freedom, liberty and justice codified in our Constitution with his call to ban all Muslim travel to the United States.

He is not just playing a reality TV personality running for president. He and those who support him are a real threat to the very foundation of our republic and democracy.

Furthermore, his rhetoric is fanning the flames of ISIS and other terrorist groups, who would like nothing more than to cast the current conflict as a defense against a new Christian Crusade with ISIS as the righteous defenders of Mohammed.

They are not. Nor are all of the millions of Muslims worldwide supporting this errant group of terrorists.

Casting all Muslims as potential terrorists would be like calling all Christians members of the Ku Klux Klan or the Westboro Baptist Church. Clearly, Trump’s egotistical rantings show that he has lost his mind, lost his conscience (if he ever had one) and he will soon lose the respect of everyone in the Republican Party with any brains. What seems to be gaining momentum is the growing uncivil discourse that is on the brink of hysterical irrationality.

America has been here before. There is a quote (most often misattributed to the American author Sinclair Lewis, 1885-1951) that states: “When fascism comes to America, it will be wrapped in the flag and carrying a cross.”

Trump has already wrapped himself in the flag. Now he’s playing with religion. What else can you call it?

Disclaimer­—Nothing in this editorial or the pages of this newspaper should be taken as the official position of the Central San Pedro Neighborhood council to which I was elected President in 2014, nor does it reflect the opinions of any of its board members. The opinions expressed here are solely mine.

(James Preston Allen is the Publisher of Random Lengths News, the Los Angeles Harbor Area's only independent newspaper. He is also a guest columnist for the California Courts Monitor and is the author of "Silence Is Not Democracy- Don't listen to that man with the white cap--he might say something that you agree with!" He was elected to the presidency of the Central San Pedro Neighborhood Council in 2014 and has been engaged in the civic affairs of CD 15 for more than 35 years. More of Allen … and other views and news at: randomlengthsnews.com )  Prepped for CityWatch by Linda Abrams.