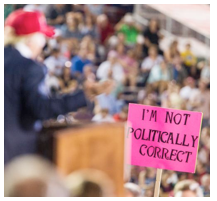 URBAN PERSPECTIVE-The recent finding by the Public Religion Research Institute confirmed what we know about how GOP presidential frontrunner Donald Trump got to be the front runner, and why he has stayed the frontrunner far longer than thought humanly possible.

He got there and stays there because so many middle-aged white blue collar workers are enraptured with him. They love his willingness to say whatever pejorative thought jumps into his skull about President Obama, immigrants, Muslims, Hispanics, and women. A majority of Trump backers are reconstructed and unreconstructed bigots.

They have told pollsters  they were enraged over the rising number of immigrants, thought whites were just as discriminated against as blacks, and saw nothing wrong with waving the Confederate flag.

There is another reason that they toot Trump’s horn. More of them are on welfare and use food stamps and public health services than are blacks and Latinos. More whites rely on social security, Medicare, and farm supports statistically and proportionally than blacks or Latinos. In Mississippi and Alabama the poverty and unemployment rate among whites is among the highest in the nation.

They gleefully and predictably rage at a government they fervently believe is in the business of giving away the company store to the minority poor. Government spending and programs to many are tantamount to hand-outs to undeserving blacks and the poor -- and that in turn equals money snatched from the pockets of hard working whites.

Yet, in the poll they also raged that the government is controlled by the wealthy, corporate, and Wall Street interests, that elections are bought and paid for by the rich, and that trade policies benefit mega multi-national corporations at the expense of the middle and working class.

This reflects a profound and deep sense that workers, white workers, are losing ground. The angry white male syndrome, much touted in times past, is not new. The trend toward white male poverty and alienation became more evident in the early 1980s when nearly 10 million Americans were added to the poverty rolls, more than half from white, male-headed families. Three decades later, the number of white men in poverty has continued to expand.

Hate groups, anti-Obama websites and bloggers, and radio talk jocks craft this as the prime reason for the anger and alienation that many white males feel toward health care and, by extension, Obama while convincing themselves and the public that this has nothing to do with race. This translates to even more fear, rage and distrust of big government.

Rightwing populism, with its mix of xenophobia, loathing of government as too liberal, too tax-and-spend and too permissive, and a killer of personal freedom, has been a powerful political engine for the GOP.

Nixon stirred the fury of blue collar, white ethnic, rural voters with his slam of the Democrats for coddling criminals, welfare cheats, and fostering a culture of 'anything goes' permissiveness, and of course, big government Great Society pandering to the poor. The crude thinly disguised code words and racial cues worked. Nixon eked out a narrow victory over Democratic presidential opponent Hubert Humphrey. The 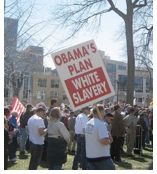 tag of law and order and permissiveness became a staple in the GOP attack play book for the next four decades. With tweaks and refinements, Reagan, Bush Sr. and George W. Bush all used it to ease their path to the White House.

In the mid-1990s, then House speaker Newt Gingrich and ultra conservatives recycled the strategy to seize Congress, and pound out an agenda that made big government, tax and spend Democrats, and soft on crime liberals the fall guys for everything wrong with America. In addition, scores of GOP governors, senators and members of congress have used wedge issues to win office and maintain political dominance. The GOP grassroots brand of populism has stirred millions operating outside the confines of the mainstream Republican Party. This happened long before Trump appeared on the scene.

The fallacious belief that big government and the undeserving, the crime prone, the poor and minorities are all the cause of national decline, has been repeatedly twisted into a patented formula to win the allegiance of many whites -- no matter how poor, no matter how needy, and no matter how dependent they are on the very programs that the GOP candidates will hack up or eliminate if and when elected.

While Trump plays on the real and imagined fears of blue collar workers, he also seems to talk and act differently than other GOP presidential candidates, past and present. He doesn’t have to lay out a coherent program or wonky policy statements on any of the major issues. Just keep blasting away at the array of straw man enemies, big government, crony capitalism, rigged party structures, the erosion of workers and the middle class living standards.

As long as Trump comes off as the man on the white horse who will make things right for put upon white workers, this will keep their applause coming for him and his poll numbers up.