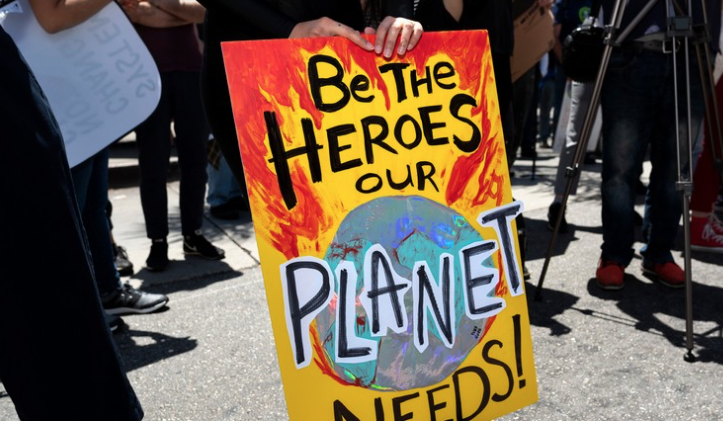 CLIMATE WATCH - It's taken too long, but the mainstream media—finally and haltingly—seems to be realizing that the climate crisis is a story that can no longer be ignored.

Until a couple years ago, many of the world's most influential news organizations, especially in the United States, relegated the climate story to the fringe. What we have called "climate silence" prevailed.

It illustrates how powerful storytelling, science-based reporting, and inequities of climate change are at the center of exemplary coverage of the defining story of our time.

How far we have come. Today, it's not unusual to see a climate story every day or two on the front page of The Washington Post or The New York Times, where Sarah Kaplan, Somini Sengupta, and Hiroko Tabuchi, among others, do exceptional reporting. TV networks, long the laggards in climate reporting, are also joining in, especially in their morning newscasts, where weather experts Al Roker at NBC, Jeff Berardelli at CBS, and Ginger Zee at ABC talk often about what they don't hesitate to call "the climate crisis" or even "the climate emergency." CNN, NPR, the Los Angeles Times, and other major outlets are hiring reporters, editors, producers, and more to staff new or expanding climate units.

It's not just US newsrooms that are increasing their climate coverage. "Media attention to climate change or global warming in August 2021 was the highest level of coverage [in] nearly 12 years," reported the Media and Climate Change Observatory at the University of Colorado, which has long monitored the climate coverage of scores of leading print, digital, radio, and television outlets around the world.

Is this coverage enough? Not yet, not even close. And there are still plenty of stumbles, like when six of the biggest US commercial broadcasters did 774 stories about Hurricane Ida in the storm's initial 72 hours and only 4 percent of them mentioned the words "climate change." But the journey towards more and better climate coverage has clearly begun, and the days, decades really, of simply ignoring the story seem to be over.

How could they not be? This year's unprecedented heat, drought, wildfires, and storms are shifting public attitudes. Three out of four Americans now believe that global warming is happening today, and 70 percent say they are either "very" or "somewhat worried" about it, according to polling by the Yale Program on Climate Communication.

Which hints at a silver lining of the climate challenge for newsrooms: committing to the climate story can be good for business. As people get more concerned about climate change, they understandably want more information about it. Mainstream news organizations, especially television, need nothing as much as they need younger audiences. Covering climate change is essential to having credibility and appealing to those audiences, many of whom say they distrust mainstream media outlets, partly because of their past climate silence.

With the story finally in the headlines, the question has shifted from whether to cover climate change—responsible newsrooms have settled that question—to how to cover it: Where's the balance between hope and fear? How to engage an audience who may think this doesn't affect them? How to restructure newsrooms to make the climate story central?

Covering Climate Now, the non-profit media consortium we co-founded in 2019, has urged our colleagues throughout the news business to engage these questions directly. Over the past two years, we have been thrilled to see CCNow grow to more than 400 partner outlets reaching a combined audience of roughly 2 billion people. Together, we've tried to identify and spread best practices that journalists everywhere can apply to make their climate coverage more accurate, illuminating and effective at engaging audiences.

Today, October 6, we'll showcase some of the best of the world's climate coverage through The 2021 Covering Climate Now Journalism Awards. TV, radio, print, digital, and photography journalists from around the world submitted their work; we received nearly 600 entries from 38 countries. The finalists represent the state of the art of climate journalism and can serve as a template for journalists everywhere who are seeking to up their climate game.

We were among the four dozen judges for this year's inaugural awards. Looking at the finalists, several themes of strong climate coverage emerge:

We're not here to spoil any surprises: This year's winners will be announced in a video special co-hosted by NBC News' Al Roker and Savannah Sellers. Not your typical awards show, this program provides a snapshot of the global climate emergency as reported by the journalists receiving the awards. It illustrates how powerful storytelling, science-based reporting, and inequities of climate change are at the center of exemplary coverage of the defining story of our time.

The video will live stream today, October 6, at 4pm US Eastern Time on the websites of Covering Climate Now and our partners Columbia Journalism Review, The Nation, The Guardian, and NowThis. It also streams on NBC News NOW on October 8 at 11pm Eastern Time and on October 10 at 7am Eastern.

We are humbled by the ambition and talent of the winners of these awards, and grateful for the growing sense of community among journalists covering the climate story—a community that should include all of us, since climate change is a story that touches every beat in every newsroom. The press is still a long way from where it needs to be on the climate story. But we find ourselves, in this hopeful autumn, just a little bit closer.

(Mark Hertsgaard is the environmental correspondent and investigative editor at large at The Nation and a co-founder of Covering Climate Now. He has covered climate change since 1989, reporting from 25 countries and much of the US in his books "Earth Odyssey: Around the World In Search of Our Environmental Future" (1999) and "HOT: Living Through the Next Fifty Years on Earth" (2012),  as well as for CommonDreams.org. His website is markhertsgaard.com. )

(Kyle Pope is the editor and publisher of Columbia Journalism Review.)