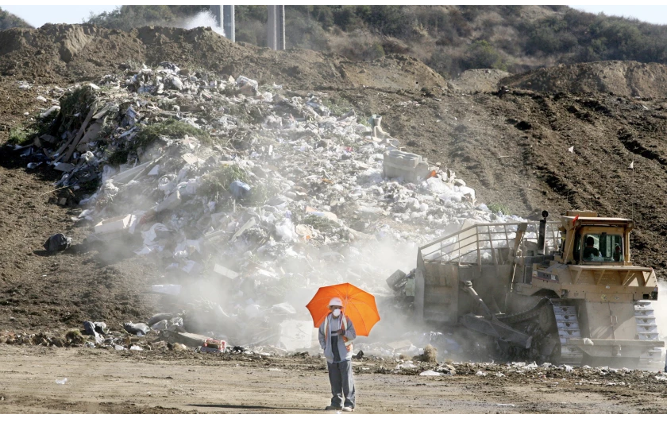 COMMENTARY-Big garbage is big money, and for decades the City of Glendale has been profiting from a dump that overlooks the community of Eagle Rock in northeast Los Angeles.

In 1958, in response to a looming solid waste disposal crisis due to the banning of trash incineration, Glendale offered the County the then-idyllic Scholl Canyon located at its eastern border, just north of the Los Angeles community of Eagle Rock, as a landfill site.

The only access to the proposed site was through Glenoaks Canyon and, when its residents rose up to oppose it, the fight was on. Alternate access was found through Eagle Rock Canyon at the top of Figueroa which was vociferously opposed by the citizens of Eagle Rock and the Los Angeles City Council.

Glendale banned trash truck traffic through Glenoaks Canyon. The City of Los Angeles was cut out of the deal.

And the Scholl Canyon Landfill opened in 1961.

Under the original agreement, Glendale granted the County the right to use its property for 17 years or “until such property has served its purpose and shall have been completely filled. . .whichever first occurs, whereupon all rights of District and County shall terminate.”

Which means the dump should have closed in the late 1970s.

The dump blew through all deadlines for closure and remediation of the land on which it sprawled. There was just too much money changing hands for Glendale to close it.

The dump was finally approaching its limits so, in 2014, Glendale filed a plan to enormously expand it, increasing the dump’s footprint by many acres and its height by 180 feet, despite a Draft EIR identifying unresolvable problems.

The citizens of Eagle Rock rose up in anger.

A 2003, a Technical Background Report by the city of Glendale noted that the dump rests on granite that is “highly shattered, sheared, and crushed.”

The Verdugo fault, capable of hosting earthquakes up to 6.9 on the Richter scale, lies less than half a mile away. Twelve more faults lie within 15 miles, with one capable of reaching 7.8.

Since 1998, the Environmental Protection Agency has required impermeable barriers to prevent the toxic compounds that build up in dumps from seeping into aquifers and contaminating public drinking water.

Glendale opened the dump in 1961 with no such protection.

A 2015 study by two scientists, one from UCLA and the other from Caltech, determined that compounds known to cause cancer were already present in test wells west of the dump.

Reports were published in 2016 documenting the harmful impact on small children and seniors from severe particulate pollution from the dump, some of the worst in the nation.

Nitrous oxide and both fine and coarse particles emitted by the dump were harming the lungs of nearby residents. Lung injury increases susceptibility to various illnesses, including COVID.

Glendale pursued the project for most of the decade until, in 2019, it finally buckled to relentless public pressure led by local interest groups in northeast Los Angeles and the Glenoaks Canyon residents of Glendale.

This scheme originated in 2017 as a back-door method of extending dumping at Scholl Canyon and is linked to the Proposed Grayson Repowering Project, which is both expensive ($500 million and counting) and polluting (it will impact wide swaths of Los Angeles from Hollywood to Highland Park as well as Glendale and beyond).

Proponents of the biogas project have claimed it would beneficially use naturally occurring landfill gas from the dump as a renewable fuel to generate electricity.

First of all, biogas is NOT naturally occurring. It is a direct result of Glendale creating and continuing to operate the Scholl Canyon Landfill which it should have closed decades ago.

And it is NOT renewable in that it requires the continued operation of the dump with all its negative impacts on surrounding communities to provide a stable source for methane.

To generate power, whether as landfill or liquid or natural gas, the methane still needs to be burned, polluting our air, and further affecting the surrounding area.

Yes, the existing content of the dump will continue to expel biogases for years but that is all the more reason for Glendale to clean up their garbage dump rather than to expand it.

All the greenwashing in the world does not change the fact that anything but the removal and clean-up of the dump is detrimental to the health of tens of thousands of people, especially children and the elderly, in Glendale, Eagle Rock, Pasadena, Highland Park, La Cañada, Montrose, Glassell Park and beyond.

“Greenwashing” is when an entity focuses on making a project seem environmentally friendly rather than taking steps to reduce the ecological impact. Renewable Generation is a fraud, perpetrated on the citizens of Glendale as environmentally beneficial when it is not.

In 2018, Glendale Water and Power (GWP) tried to push through approval of the gas plant without further public review.

The following year, Glendale announced it was withdrawing its plan to expand the dump but, behind closed doors, continued with its plans to build the gas plant.

And was widely criticized. Public comment was 90 percent opposed to building the gas plant, but Glendale is still proceeding with its plans.

The EIR itself is simply a look at if any alternative, primarily no project, would provide beneficial use of naturally occurring landfill gas.

Which presupposes that the project is beneficial. And that emissions and other hazards would be worse if they did not build the facility.

The EIR appears to be more about refuting the comments of those opposed to the proposal than assessing the environmental impact.

What it doesn’t say is that there would be almost no impacts (or opposition) if Glendale wasn’t operating the dump in the first place.

The final EIR, downplaying most of the public comments, was released in August.

The Glendale City Council meets to certify the final EIR and approve a Conditional Use Permit for the project this Wednesday, October 6.

Glendale has been flaring the methane at Scholl Canyon since April 2018 without appropriate warning to or input from those who it affects. The city is taking the position that reducing this danger is the principal purpose of the Reclamation Project.

From an environmental point of view, flaring is the worst possible way to deal with methane gas, polluting the air we breathe, coating our homes and parks with particulate matter containing known carcinogens, and contributing to global warming.

Residents within a two-mile radius have complained of difficulty breathing as well as soot and particulate material falling on homes, in pools and on cars. These effects and more will only grow over time and expand as the wind spreads pollutants farther afield.

Pipelines crossing earthquake faults are subject to rupture. Risk in an area prone to wildfires has been exacerbated by the drought and homelessness encampments. This is a recipe for disaster.

The methane is not going away. Even if the landfill shut down today, the garbage already there would produce methane for decades to come. So, the methane from Scholl Canyon has to be managed.

And any work by or with the Southern California Gas Company, which has a well-documented history of cutting corners and disregarding safety, has inherent dangers – neither Glendale, nor Pasadena, nor Eagle Rock deserve to become the next Porter Ranch.

Burning natural gas in future years is also in direct opposition to a state mandate requiring 100 percent power from non-carbon-based sources by 2045.

Glendale owes it to the residents of Glendale and other affected areas to address these issues, not make them worse. And certainly not to profit off such an expansion.

Dumping generates millions of dollars in revenue for Glendale in fees from other Valley cities.

For the GWP to make money running a biogas plant, it would have to expand the dump to accept more garbage.

Capital expenditures for the biogas electricity plant – $35 million plus – will make expansion of the site to recoup Glendale’s investment a priority and delay its closure.

It will cost more, probably a great deal more, for Glendale to remediate the existing hazards. But, at the end of the day, they will face the same problems a decade from now magnified by time. And face a bigger bill.

A no-brainer if it wasn’t for those dump fees.

And if Glendale had to collect and schlep its trash out to the Sunshine Canyon Landfill and pay their tip fees, the cost would be millions more. Per year.

On the other hand, what will the liability costs be in the event of fire and explosions in the wake of a quake or wildfire? Damage won't magically stop at the city limits; how will Glendale compensate not only its own people but those of Los Angeles?

On October 6, 2021, at 5 p.m., Glendale is holding a meeting to certify the final EIR and approve a Conditional Use Permit for the project.

The Biogas Renewable Generation Project will endanger health and safety of residents in Glendale and the surrounding communities.

Do you know people in Glendale who care about health and climate issues?

Please ask them to contact their five key city officials before the vote on Wednesday:

Explain that expanding the dump increases pollution of all kinds right in their city, increases the potential of toxin releases in the event of wildfires or earthquakes in a high-risk area and, even before liabilities are factored in, increases overall cost.

Stopping this gas plant is essential to closing the dump.

Glendale residents and others oppose it in a brief video here.

You can contact the Glendale Councilmember yourselves, and anyone can attend the meeting at this site and make a comment by calling (818) 937-8100.