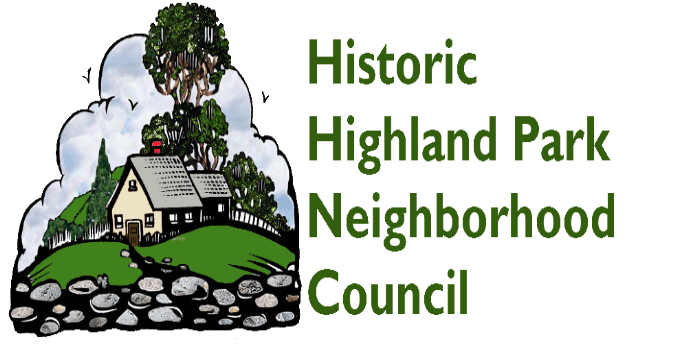 EASTSIDER-Last month, when we visited the Historic Highland Park Neighborhood Council, they had a major blow-up over a proposal to totally revamp their Land Use Committee; directly by the Board itself. This month, the food fight continued.

The exact language of the proposal did not change, and is:

“25. [20 min] ​Discussion and motion for the Board to make changes to the Land Use Committee by reappointing 2 Co-chairs and 3 additional Board Members, and instructing the 2 Co-chairs and 3 additional Board Members to appoint up to 5 new Stakeholder Committee Members. (HHPNC Bylaws - Article VII COMMITTEES AND THEIR DUTIES - The Board may establish, disband, or make changes as needed to any Standing or Ad-hoc committee. Any such action by the Board shall be noted in the Board meeting minutes.)”

What did change, is that my Public Records Request was answered. Their caveat was that “We are currently compiling nonexempt records. At this time we intend to produce some if not all documents by November 30,2019.”

Directly on point in the response was the disclosure that DONE had weighed in on the matter prior to last month’s meeting, although there was no reference to this on the November agenda. The specific recommendation made by DONE was:

“After reviewing your bylaws, our determination is that the recently appointed board member, Yaya Castillo, was a member of the Land Use Committee based on her stakeholder status. When she decided to run to be a board member and was subsequently appointed, she no longer had stakeholder status and therefore, is no longer recognized as a voting member of the committee.

The Departments recommendation is to conduct next week’s committee meeting ensuring that there is not a majority of the quorum as to not violate the Brown Act. Then, at the next general board meeting, we recommend that the board vote on who will be the 5 board members of the Land Use Committee to ensure fairness and also fill the vacant stakeholder position.”

Well gee. You would think that DONE’s recommendation is a big deal, and yet it was not referenced in the November Agenda and/or accompanying documents.

Back to the Plot

As in last month’s meeting agenda, this hot button item was Item 25, late in the Agenda and unlikely to get addressed within the two hours designated for the entire meeting.

Again, there was a sizable crowd, mostly to address this Item, and again a loud hue and cry erupted at the beginning of the meeting. Without getting too far into the weeds, Board member Mauro Garcia made a motion to move the item up and deal with it directly. That effort resulted in parliamentary spaghetti, with his effort superseded with a contrary long substitute motion which was summarily voted on.

Part of the confusion is that for whatever reason, the HHPNC has elected to use Rosenberg’s Rules of Order, instead of the usual Robert’s Rules of Order which almost everyone else in the universe uses. Legal, but not helpful.

Anyhow, the discussion became so disruptive that it was addressed earlier than listed on the Agenda. And it turns out that the Board indeed intended to ignore DONE’s recommendation, and. . .

2) Then appointed three additional board members; and

3) Finally, delegated the authority for these five people to directly appoint 5 new stakeholders to round out the full committee.

Or, as I mentioned in CityWatch, a total redo of the Land Use Committee all triggered by one stakeholder on the LUC becoming a Board member.

Anyone still believe in the tooth fairy?

The inglorious food fight and hurled accusations back and forth are not worthy of recording, since this is a not an unheard-of occurrence in many of our neighborhood councils. But take note, as these issues can split communities that are trying to work together.

As it all turns out, my Public Records Request had referred to “any/all documents relating to Agenda Item 29 on the November 7 Agenda.” And there were evidently a number of such documents by and between Committee members, or about Committee members. Some of these matters have resulted in discussions between the President and DONE. Wow.

I am not making this up.

If you think this is complicated and authoritarian, it is. On the other hand, this whole contretemps is a shame. In the last set of NC elections, the HHPNC wound up with almost a whole new board, and they are, by and large, well-meaning people who are hamstrung by lack of knowledge regarding the mechanics of the BONC/DONE gobbledygook patchwork of rules. Shame on DONE and BONC, who pretend to support the NC system, even as they make it more cumbersome.

So the HHPNC Board is adopting a siege mentality because in fact they are under siege when it comes to the Land Use Committee. A lot of the problem lies with the language of their current Bylaws, as referenced in the LUC Item description, but those Bylaws are not likely to change anytime soon.

And speaking as a former longtime Chair of a Bylaws Committee, I can personally attest that trying to provide reasonable local bylaws while being nit-picked by every wannabe lawyer and putz that works for DONE or BONC who keep saying NO, is a task for a masochist or a saint.

A second problem is that the Board really needs a Parliamentarian, which of course is nowhere to be found and/or supplied through DONE. The Chair and the Board should not have to be distracted by such minutia as they go through an agenda, losing any semblance of order.

What they really need is a mediator, because honestly, these are decent people who are dedicated enough to their community to come out time after time on all sides of these issues and vigorously try and make Highland Park better, even as it is in the throes of gentrification and subject to the snail trail of Jose Huizar.

Stay tuned, the saga moves on.