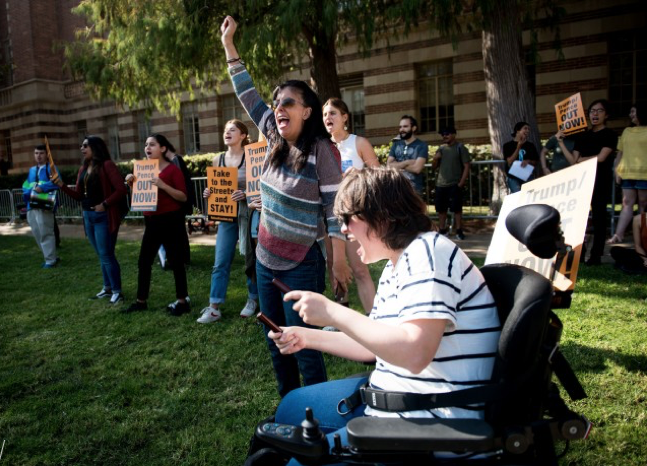 GUEST COMMENTARY--In the midst of a tumultuous ideological divorce, it’s best to leave the kids out of it.

But that doesn’t seem to be in keeping with the current political thought process.

Businessman Donald Trump Jr. and attorney Kimberly Guilfoyle, a former Fox News host and his current girlfriend, visited UCLA’s campus Nov. 10 to promote Trump Jr.’s new book titled “Triggered: How the Left Thrives on Hate and Wants to Silence Us.” The event was organized by a UCLA chapter of the conservative student group Turning Point USA to promote the book.

In the far-right manifesto, Trump Jr. outlines the hardships he has faced as a supporter of his father’s policies and shames the left for trying to silence his and his father’s constituents’ beliefs. As expected, protesters came in swarms. Not expected, however, was that both sides of the political aisle would be protesting the panel – albeit for different reasons.

And as the presentation dissolved into chaos, it was reminiscent of an unruly mosh pit – the key difference being the lack of joy or an appropriate venue.

It is time to stop pretending this form of political discourse is normal. Politicians and their counterparts should not visit college campuses simply to troll for animosity and exploit student reactions for media attention. And if they do choose to visit – which they have the right to do – they must let students speak no matter where they stand in respect to their political beliefs.

Pseudo-politicians like Trump Jr. need to stop targeting students for a “sound bite” and encourage a legitimate political conversation on college campuses.

Outside Moore Hall, organizations including Refuse Fascism, the Revolution Club UCLA, the Afrikan Student Union at UCLA and Young Democratic Socialists of America at UCLA demonstrated against the event. Inside Moore Hall, followers of the extremist, far-right media personality, Nicholas Fuentes, and other activists reacted to the cancellation of the Q&A portion of the event and heckled Trump Jr. off stage.

Trump Jr. and Guilfoyle’s episode is not the first example of divisive politicians targeting college campuses for media attention. It bears a striking similarity to the failed “Free Speech Week” at the University of California, Berkeley, in 2017, in which far-right activists like Steve Bannon, Ann Coulter and Milo Yiannopoulos planned to speak on their allegedly stifled liberty.

Michelle Ohanian, a third-year history student and the policy director for the Bruin Republicans, said college campuses are used to sensationalize both sides of the political spectrum.

“I think (Sen.) Bernie Sanders would come to UCLA because he knows how much he would be liked and (Trump Jr.) comes to UCLA for publicity purposes to promote his book,” Ohanian said. “He knows that the media will cover it because the media is concerned about what goes on in college campuses.”

And UCLA is no stranger to controversial speech.

Back in 2017, commentator Ben Shapiro divided the campus over the logistical concerns deemed as barriers to free speech – and unsurprisingly, students were not pleased.

UCLA reacted similarly to Department of Treasury Secretary Steven Mnuchin’s presence at a moderated discussion about the economy in March 2018. The secretary cracked a tone-deaf joke suggesting that students hissing in the audience were upset because he is a Yale alumnus speaking at UCLA. When a protester interrupted with her beliefs on Mnuchin’s decisions with sanctions in North Korea, she was quickly escorted out of the building.

Some people argue that certain ideas and ideologies should be banned from college campuses because of the divide they cause. While some conversations might not be welcomed or popular, they are protected by law. And unfortunately, both bigotry and hate speech are protected under the First Amendment – despite how abhorrent students and activists might find this rhetoric.

Kimberly Uzzo, second-year political science and global studies student and Bruin Democrats marketing director, said there is a line between free speech and free rein – and that line is drawn when students feel threatened or unsafe on their campus.

“I value an understanding of the side that you are not on, whether that be the left or the right, and I think that ignoring it is not going to solve the partisan problems we are having in the country,” Uzzo said. “But I do think you also have to be careful with what you bring onto campus, because certain things aren’t just a matter of opinion and are much more grave and serious.”

No person, of any political alignment, should take advantage of young minds to land a segment on Fox News or the front page of the Huffington Post. Share your thoughts, plans and ideologies, but don’t condemn others for doing the same under the protection of having the microphone.

The first chapter of Trump Jr.’s book is titled, “Trigger Warning.” Under a header of the same name addressed to readers, he writes, “Do not continue reading this book if you don’t like conservative ideas,” and “If you’re a dyed-in-the-wool liberal or a social justice warrior, why don’t you go ahead and put this book down altogether.”

Certainly, these phrases were meant to get a chuckle out of the reader. Then again, nothing is funny about the mirroring actions to this rhetoric that took place in Moore Hall on Nov. 10.

Because, in all honesty, nothing says triggered more than not being able to own up to it.

(Photo above: On Nov. 10, Donald Trump Jr. visited UCLA to promote his new book in an event organized by a UCLA chapter of Turning Point USA. This event spurred protest, the exact kind of reaction he was looking for, which is a volatile form of political discourse that doesn't benefit either side. (Niveda Tennety/Assistant Photo editor)

(Elizabeth Hanczor wrote this perspective for The Daily Bruin.)