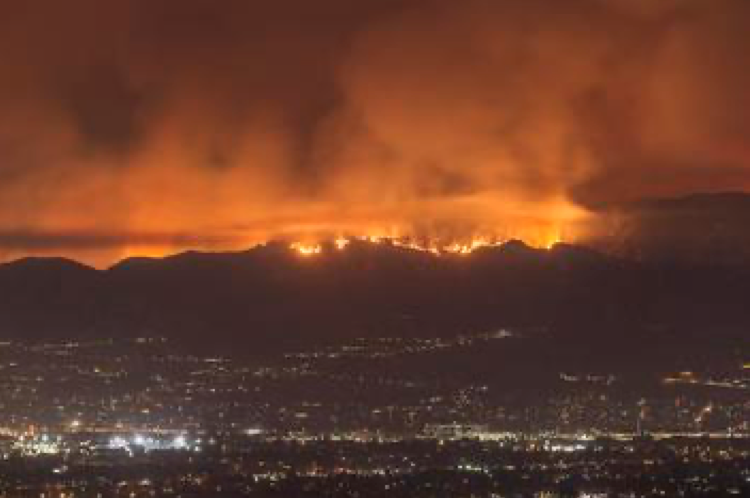 NEW GEOGRAPHY-The recent rash of fires, like the drought that preceded it, has sparked a new wave of pessimism about the state’s future.

But the natural disasters have also obscured the fact the greatest challenge facing the state comes not from burning forests or lack of precipitation but from an increasingly dysfunctional society divided between a small but influential wealthy class and an ever-expanding poverty population.

We are not addressing either the human or natural challenge. Once the ultimate “can do” state, California is morphing into one that is profoundly “can’t do.” Neither right nor left seems to have any program to confront the state’s worsening malaise on issues ranging from housing, education and the economy to the care of the environment.

To be sure, the right is correct to lay some of the blame for fires on green policies that have restricted brush clearance, and have prevented the thinning of the state’s forests, a finding shared by the state’s Little Hoover Commission. But it’s been years since Republicans have been able to present a coherent program — not surprising since vanishingly few in the state listen to, much less follow, the conservative agenda.

For its part, the progressive left controls the debate, the academy, most of the media, but has few answers to the problems plaguing our state. For many, scare-mongering about climate change defines and justifies even the most economically ruinous actions; activists even blame the recent power outages on climate, though the primary cause was lack of investment and maintenance by the state-regulated electrical utility.

Blaming PG&E, President Trump, oil companies, housing developers, car commuters or manufacturers for our problems is no doubt emotionally satisfying to the zealots in Sacramento and their media allies. But despite all this sturm und drang, California’s emissions over the past decade have fallen less than 39 other states and are essentially irrelevant on a global level. Even if the United States adopted the Green New Deal, the impact on climate, notes some recent studies, would be almost infinitesimal. The big emissions increases are almost entirely coming from China and other the less developed countries.

California needs to rediscover its magic

The natural challenges we face are, in fact, not so dissimilar than those in the past. From its inception, California has always been an “unnatural” place for intense urban development. Its lack of water, particularly in the populated parts of the state, long has been an endemic problem; drought and fire a constant theme dating back generations.

The great achievement of the state was to employ innovative engineering solutions that brought massive water supplies from the Sierra range to the water-deficient Bay Area, Southern California and the Central Valley. Elaborate schemes brought electricity and power to the state, sometimes from as far as Utah. Where there was no natural port, one was carved out at San Pedro and Long Beach, now easily the largest entry port in North America.

It’s hard to believe any of this could be done today. Under progressive governors as well as conservative ones, we have done very little to improve our water systems, much less make it more resilient in the face of much feared climate shifts. We talk boldly about going “all electric” but close down emissions-free nuclear plants, shutter efficient gas facilities while refusing to expand hydro-electric systems. No state imports so much of its energy, notably from the enlightened nation of Saudi Arabia, just to keep the lights on — at great cost to both consumers as well as soon to be unemployed California energy workers.

Who loses in the new California?

The future, if Sacramento gets its way, likely will resemble Jerry Brown’s old “era of limits” on steroids. It will become more expensive to get around, even in electric cars that rely on what are already among the country’s highest rates, almost twice as high as competitors like Texas, Arizona, Washington and Oregon, electricity that is rightfully seen as often unreliable as well. Our ability to buy housing, particularly the family-friendly variety, will also be restricted by a planning regime that seeks to cram most into small apartments.

This future appeals to some predictable voices, like The New York Times and The Atlantic, which see the fires on the urban edge as a reason to pack more people into our already congested, unaffordable cities. But these observations fail to distinguish between the heavily wooded areas on the hilly fringes of the metropolis — which are indeed fire-prone — and largely flat expanses of rangeland adjacent to both the Bay Area and the Los Angeles basin. If we don’t find safe places to build the kind of housing most people, notably families, need, our diminished housing choices will accelerate the rising tide of people and companies leaving the state.

These ruinous policies are not necessary. They are based largely on intense “virtue-signaling,” which might also provide the basis for Gavin Newsom’s eventual run for the White House. But he may consider what the rest of the country might think about the kind of bifurcated, dystopic society California now presents; it certainly did not help the failed presidential candidacy of Kamala Harris and was bad enough to keep the disaster that is LA Mayor Eric Garcetti out of the presidential sweepstakes.

To be sure, not everyone is suffering from the state’s mismanagement. The oligarchical firms of Silicon Valley, their venture funders and some of their unicorn offspring continue to rack up billions. They plan to house their young employees in glorified dormitories until they decide to leave.

But the path for the rest of Californians is not so clear. Over the past decade, most California metros, notes Chapman University’s Marshall Toplansky, are creating, on a per capita basis, far fewer mid- and high-paid jobs than the rest of the country, particularly places like Dallas, Charlotte, Austin and Salt Lake City. Higher-paid industrial jobs, critical to the working class’s progress, have grown well below the national average over the past decade; last year it was fifth from the bottom among the states.

This economic disparity in the state, not climate change, as Newsom and his allies insist, remains the biggest challenge facing California. As much or as quickly as it manifests itself, climate will impact every part of the country and the world. The compelling issue should be not how California can heroically address climate issues, but how to do so without engendering a truly unsustainable social transformation.

In terms of fire and drought, there are practical steps to be taken, including allowing more extensive elimination of dead trees and brush as well as building extensive fire breaks, particularly near transmission towers. Potential water shortages can be best addressed with more storage and water-catchment systems as well as conservation and desalinization.

California could choose to reduce emissions in ways that, as longtime environmentalist and author Ted Nordhaus says, eschew “utopian fantasies” and “make its peace with modernity and technology.” There are proven, less economically intrusive ways to reduce emissions without skewering the middle class and turning them into permanent renters, like expanding hydro-electric, nuclear and, most importantly, increasingly abundant natural gas in favor of ruinously expensive renewables.

But efficiency and saving the middle class are not priorities for Sacramento’s empowered bureaucracy. Every time regulators impose more restrictions on home construction and force electricity and water rates up, impacting factories, farms and households, they contribute to the outrage that this richest of states also suffers the country’s highest poverty rate, and hosts many of the country’s poorest metros. A huge percentage of the population — over one third of the population, according to the United Way — are barely making ends meet. California is also home to roughly half of the country’s homeless.

The consequences of staying on this course are far scarier, at least in the short term, than anything that can be ascribed reasonably to climate. Despite the good intentions of some, misplaced environmental policies are building a society — already evident — that will restrict the trajectory, in particular, of the young and minorities, who are faced a declining number of well-paying jobs and ultra-inflated rents and housing prices.

We need is policies whose prime goal is not making the already fabulously rich, like Tom Steyer, or ambitious politicians like Newsom, feel better about themselves. We require an approach that offers hope to middle- and working-class Californians by improving housing choices, expanding industry and jobs, particularly in the poorer areas. New sustainable, and cost-effective, water, power and transport infrastructure constitute a critical part of this solution, as is an education system that teaches skills and practical training for students rather than fashionable “woke” ideology.

If we don’t reverse course, this bifurcated social structure, exacerbated by state policies, threatens something far more unsettling than any natural disaster. A society torn by seemingly unbreachable divisions represents the greatest, and most pressing, sustainability challenge before us.

(Joel Kotkin is the Roger Hobbs Distinguished Fellow in Urban Studies at Chapman University and executive director of the Houston-based Center for Opportunity Urbanism. He authored The Human City: Urbanism for the rest of us, published in 2016 by Agate. He is also author of The New Class Conflict, The City: A Global History, and The Next Hundred Million: America in 2050. He is executive director of NewGeography.com and lives in Orange County, CA. His next book, “The Coming Of Neo-Feudalism,” will be out this spring.  This piece first appeared on The Orange County Register.) [[[  https://www.ocregister.com/2019/11/09/unsustainable-california-joel-kotkin/  ]]] Photo: Scott L via Flickr under CC 2.0 License. Prepped for CityWatch by Linda Abrams.