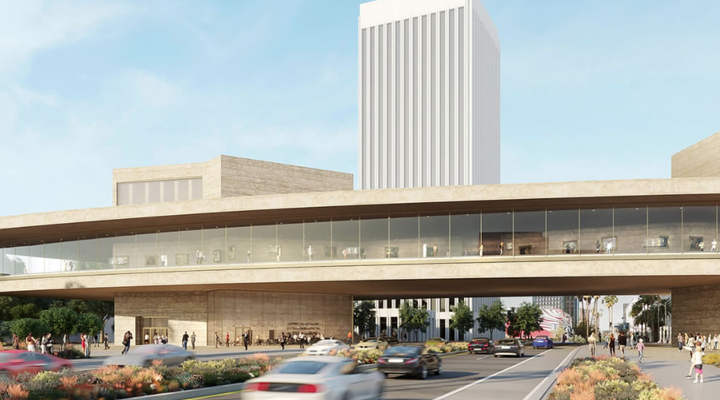 ARCHETECHTURE POLITICS-This Wednesday, the LA County Museum of Art’s proposal to build a bridge across Wilshire Boulevard will face its first hurdle in city government.

LACMA is asking the city of Los Angeles to hand over air rights so it can span Wilshire between Spaulding and Stanley, right at the spot where Wilshire makes a slight dog leg, creating the scenic views east-west that contribute to its designation as a Scenic Highway.  The span, which will be roughly 100 feet wide and 200 feet long, will snap Wilshire in half, robbing the historic Tar Pits of its civic and cultural importance while forever changing the way in which that park connects to the fabric of the city.

Imagine if New York’s  American Museum of Natural History proposed to cover Central Park West in a bridge nearly twice the width of the Santa Monica Freeway, and just as low to the ground.  Would New York approve such an invasion?  That’s what the City of Los Angeles is poised to do.

LACMA wants the city to believe that there is no public opposition to its $650 million building scheme, nor should there be.  Neither is true.  The Los Angeles Review of Books and the Los Angeles Times have both convincingly demonstrated that LACMA can build a larger new museum on its existing footprint, north of Wilshire, and do so for far less money.  LACMA’s bridge will add at least $177 million dollars to the new museum’s construction costs, possibly bringing the museum to the brink of bankruptcy.  Incredibly—as LACMA itself admits—that’s for a museum that will be smaller!

How much smaller? The devastatingly bad news is, LACMA is going to replace four existing 1960s and 1980s buildings with a single, elevated pavilion with a third less gallery space and half the wall space.  Building the hugely costly bridge is robbing LACMA of its need for more space—the very reason the museum proposed the current “expansion” in the first place.  No museum in the history of museums has ever before sought to subtract square footage under the banner of “expansion.”  LACMA is the largest encyclopedic museum in the western United States.  Most of its vast 160,000-object collection sits in storage.  The museum should be doubling its square footage.  If it doesn’t, thousands of paintings and entire collections will be relegated to permanent storage, crated up and hauled into vast warehouses, like the Ark of the Covenant in “Raiders of the Lost Ark.”

As if these were not reasons enough to oppose the Wilshire boulevard span, there’s more.  LACMA’s single pavilion will be made entirely of concrete.  Galleries will become immutable, as will the building itself.  This means that the bridge structure will make future museum expansion impossible—putting LACMA in a concrete noose—while confining curators to galleries, like monk’s cells, that cannot be adapted to the specific needs of an artist or the artistic narrative.

And then there’s the effect on Wilshire Boulevard, the Tar Pits, and the Miracle Mile neighborhood.  No one voluntarily walks under a freeway overpass, not just because the traffic noise is unbearable, and nonstop.  No one walks under one because the effect of so much mass bearing down is oppressive.  Underpasses are gloomy, inhuman places.  They rob us of our connections to our surroundings, and in their shadowy light and echoing acoustics, make us feel lonely and lost.  So, why deliberately build one?

Take a saunter on Westwood Boulevard, just south of Pico, where the former Westside Pavilion spans the street, and you’ll get a taste of what’s to come on Wilshire between Spaulding and Stanley.  Now imagine something ten times longer and much lower to the ground.  Who will want to stroll along Museum Row through a sepulchral tunnel?

A new organization has formed to rally public opposition to LACMA’s fiscal and architectural suicide.  The Citizen’s Brigade to Save LACMA urges everyone who believes the museum is wrecking itself and Wilshire Boulevard to speak up and attend the public hearing on Wednesday, November 6, 2019.  (The City Council’s Public Works Committee meets at 1:00 PM in the Edward R. Roybal Board of Public Works Session Room, Room 350 in Los Angeles City Hall (3rd Floor), 200 North Spring Street, Downtown Los Angeles. The entrance to City Hall is from Main Street.)  You can also express your concerns via email at A Call to Arms.

(Greg Goldin is the co-author of Never Built Los Angeles, and Never Built New York, and is currently working on an exhibition at the Museum of the City of New York on the history of Central Park.  From 2000 to 2012 he was the architecture critic at Los Angeles Magazine.)