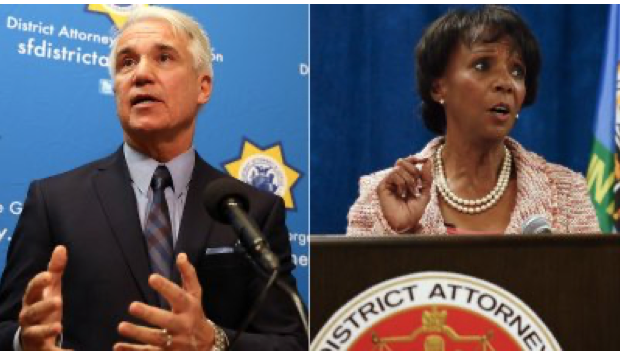 @THE GUSS REPORT-Los Angeles County District Attorney Jackie Lacey is eating her words lately, resulting in a bad case of Gascón, as it were, as in George Gascón, the San Francisco District Attorney and former LAPD copper, who announced his return to LA to run against Lacey to helm the largest local prosecutorial office in the United States.

That explains why Lacey suddenly decided to look into the latest corruption allegation leveled against LA City Council president Herb Wesson, whose self-dealing she has long ignored. She also now blames the LA County Sheriff and Coroner for her failure to proactively prosecute Democrat operative Ed Buck for fatal overdoses of young, gay, black men in his West Hollywood home on separate occasions in recent years.

But why put that statement out now? It isn’t news. It’s excuse-making triggered by Gascón’s candidacy, enabled by the public relations agency known as the LA Times.

Havana-born Gascón should read the past several years of this column to see the chaos Lacey that never prosecuted. Instead of running as a chum of LA’s insular political infrastructure, he should run as an LA-experienced Latino who will expose Lacey’s tacit approval of political corruption, homicide and rape.

Last week, this column wrote that Wesson sent out a fundraising blast accusing the LA Times of colluding with his opponents in a “smear campaign” in his effort to become the next LA County Supervisor of the Second District.

We didn’t publish Wesson’s entire claim because that would help facilitate his alleged quasi-criminal enterprise against LA communities. But this excerpt provides greater detail of his allegations against the credible column written by Times scribes David Zahniser and Emily Alpert Reyes:

“Using opposition research paid for by my opponents, the LA Times wasted 2500 words using unnamed sources and sensational conjecture to print a political hit piece against my family.”

Wesson refuses to substantiate this claim, though the Times’ silence is as deafening as Wesson’s failure to deny the allegations. Still, if the Times won’t stand up for its writers, how can it convince readers it will stand up for them?

Last week, hilarious Boston political pundit Howie Carr described Beto O’Rourke as “America’s most annoying son-in-law” as he ended his car accident of a candidacy to become the Democrat nominee for president in 2020.

Next to quit won’t likely be Andrew Yang or any of the lesser-known candidates, but highly visible yet failing-to-connect California Senator Kamala Harris, who squandered the Dem spotlight after launching a factually incorrect attack on former vice president Joe Biden during an early Dem debate.

Last week, Harris shuttered virtually all her New Hampshire campaign operation months before its early state primary on February 11. That bodes poorly for her on Super Tuesday on March 3.

While her campaign drowns, Harris claims she will be the nominee and next president. But her hinting that America might not ready for a black, female president is a convenient excuse for her coming campaign exit as she ignores the clamor for Michelle Obama, or even Oprah Winfrey, to jump into the race despite both declaring that they won’t.

Harris should read the latest from Democrat pollster Chris Anderson, who wrote last week, “And Michelle Obama could probably clear the field” of Dem candidates if she were to run.

This summer this column warned that conditions in LA could get even worse, given that Wesson’s successors in the City’s legislative wing are the oft-confused Nury Martinez and Joe Buscaino, the latter of whom is an impatient ex-cop who sometimes runs meetings when Wesson and Martinez skedaddle to dodge criticism.

But Buscaino might soon get the City sued (again) for its never-ending abuse of free speech.

In the past ten days, Buscaino twice attempted to eject critics from meetings but was twice overruled by two different Deputy City Attorneys who referee public comments. In both instances the LAPD was ordered to immediately allow both men to return and resume their comments.

Video of both incidents may be used whenever it is that the City finds itself hit with another 1st Amendment lawsuit.

This column predicts that the next such suit will be filed by one Michael Hunt, who has twice sued and won huge settlements against City Hall. He won another partial legal victory against the City last week related to a false arrest claim arising out of an LAPD Commission meeting.

That’s yet another story that you won’t find in the LA Times.

LA Animal Services last week issued a plea to help two pigs who wound up in its impound. Pigs are particularly endangered in high-kill government impounds like LA Animal Services (LAAS) because it isn’t easy to find a safe, viable place for them to go.

This columnist, however, has several friends who are expert pig rescuers.

So it’s a wonder that neither LAAS GM Brenda Barnette, nor any of Mayor Eric Garcetti’s five appointees to its Commission who are supposed to hold Barnette accountable, responded to multiple offers to help the porcine ones if bail fees are waived and if the Animal Welfare Trust Fund (AWTF) pays for the pigs’ spay or neuter surgeries and basic check-ups.

This column previously exposed that the AWTF was being squandered on travel, lodging, food and tickets for LAAS personnel to attend industry events, rather than on animals’ direct care, which City Controller Ron Galperin was repeatedly warned of but ignored.

If those five Garcetti Commissioners ignore offers to help the pigs, or any animals, what are they doing there? Of the five, Larry Gross, Alisa Finsten, Olivia Garcia, Jose Sandoval and Roger Wolfson, only Gross, who is Commission president, punctually shows up for every meeting, stays the whole time and engages. The others should have their undated resignation letters triggered, given that they don’t take the privilege seriously. Wolfson, who shows up dressed in playground attire, is the biggest violator.

Councilmember Paul Koretz has been asked to intervene.

Before we go, kudos to Fox 11’s Elex Michaelson for challenging Mayor Garcetti’s delusional claim . “LA is the model for dealing with homelessness.” Our local media has too long accepted such political idiocy without blinking. Michaelson’s show, “The Issue Is,” airs Friday nights at 10:30 pm. Garcetti’s claim is made at the 3-minute mark. As the worm squirms. . .

(Daniel Guss, MBA, is a member of the Los Angeles Press Club, and has contributed to CityWatchLA, KFI AM-640, 790-KABC, Huffington Post, Los Angeles Times, Los Angeles Daily News, Los Angeles Magazine, Movieline Magazine, Emmy Magazine, Los Angeles Business Journal and elsewhere. Follow him on Twitter @TheGussReport. His opinions are his own and do not necessarily reflect the views of CityWatch.) This is image appeared on the KTLA website: (Credit: Justin Sullivan / Getty Images; Mel Melcon/Los Angeles Times))