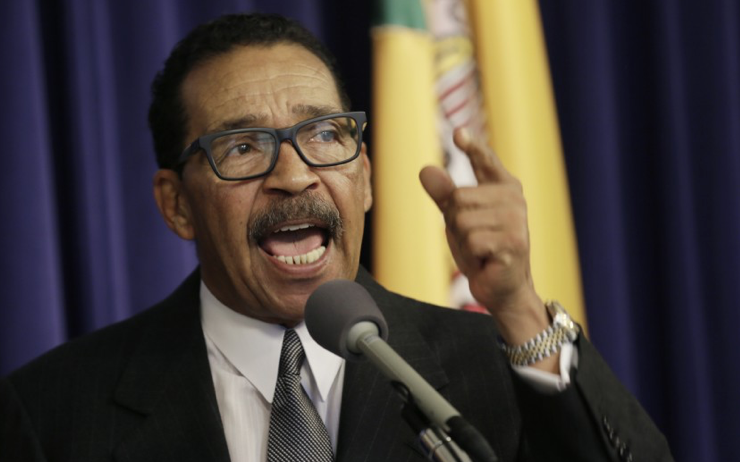 @THE GUSS REPORT-A frantic LA City Council president Herb Wesson released a statement a few days ago in the wake of a front-page story in the LA Times on his latest self-dealing, corrupt move involving one of his sons, claiming that the story is a “hit piece” funded by those seeking to derail his shaky campaign to become the next LA County Supervisor from the 2nd District.

The Times reported that one of Wesson’s sons, Herb Wesson III, got a below-market-rate apartment rental from a developer whose building project the lawmaker recently ushered to approval while other tenants in the building got regular rent increases.

In his emailed statement, Wesson accuses the LA Times and David Zahniser and Emily Alpert Reyes, authors of the well-written and credible piece, of colluding with his opponents in the Supervisor race.

More specifically, Wesson accuses Zahniser and Alpert Reyes of using “opposition research” from one of his opponents in their story though the lawmaker offers no proof and didn’t name which opponent he says funded it.

I reached out to one of Wesson’s leading opponents, former LA City Councilmember Jan Perry, whose campaign Communications Director, Helen Sanchez, subsequently forwarded me a copy of Wesson’s release. “We had nothing to do with this and we have not hired an opposition researcher. It isn’t necessary,” the spokesperson told me.

That’s a fair point. Not only has Wesson’s corruption been voluminously documented in this column, rumors are circulating that more embarrassing stories on the career politician are on the horizon, not only from this columnist’s keyboard but from those of others.

Wesson’s email blast made other eye-opening claims, as well.

In the opening sentence, Wesson claims to be “a pretty even-tempered guy.”

That’s the same Herb Wesson who infamously spoke down to former LA Mayor Richard Riordan, grinningly denying him the additional time to speak at a meeting in the same way all other dignitaries are afforded extra time to be heard, tauntingly saying “this is our house.”

The LA Downtown News published this spot-on piece of Wesson’s thuggery and rudeness in the Riordan incident, writing “Wesson acted less like a leader than a bully.”

Elsewhere in his email blast, Wesson misses the extreme irony of comparing himself to Joe Biden, whose son is also presently mired down in multiple corruption scandals. Is comparing himself to an encrusted, embattled, white septuagenarian going to help him win the 2nd District?

But you know what Wesson didn’t say in the email blast that later begged for campaign donations?

Wesson didn’t demand an apology and retraction from the Times or threaten a defamation lawsuit. He hasn’t done any of that in response to this column’s exposés about his corruption, either.

That’s because Herb Wesson’s corruption is undeniable, even by him.

(Daniel Guss, MBA, is a member of the Los Angeles Press Club, and has contributed to CityWatchLA, KFI AM-640, 790-KABC, Huffington Post, Los Angeles Times, Los Angeles Daily News, Los Angeles Magazine, Movieline Magazine, Emmy Magazine, Los Angeles Business Journal and elsewhere. Follow him on Twitter @TheGussReport. His opinions are his own and do not necessarily reflect the views of CityWatch.) Photo: Irfan Khan / LA Times. Prepped for CityWatch by Linda Abrams.