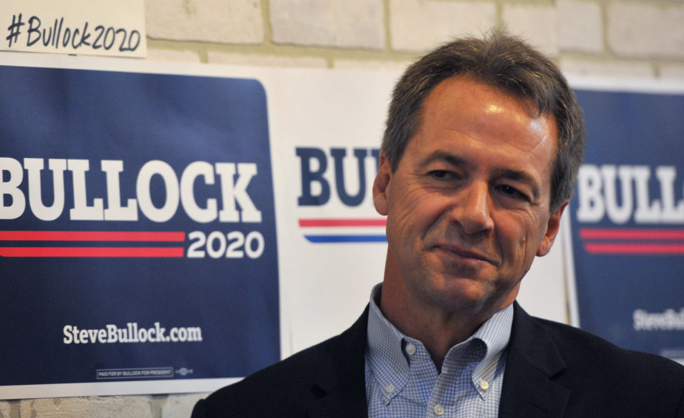 GUEST WORDS--“You know why people don't like liberals? … Because they lose.  If liberals are so f*@king smart, how come they lose so goddamn always?”

What if I told you there's a Democratic presidential candidate who basically has a lock on winning back the oval office in 2020?  Interested?  His name is Steve Bullock and he's the Governor of Montana.  If you're like the rest of America, you probably know very little-- if anything-- about this guy.  A "low on the radar," "also running," that just happens to be the most pragmatic of the lot.  My first encounter with Bullock came via NPR, which lulls me awake weekday mornings.  The problem with hazily waking up to the radio is you're never sure of what you actually heard...  Is this politician making sense or am I dreaming?

I did some digging.  I wasn't dreaming.  Moreover, out of the eighteen candidates still in the race, strategically, he is the best shot at taking out Donald Trump.  Surely, I'm joking, right?

As a lifelong Independent who's cast ballots for "both sides of the aisle,” I'm as purple as they come, though when asked, I say I'm a “Candidist” because it sounds interesting and happens to be true.

Whether it's Republicans controlling Washington's legislature or Democrats owning California's state house, one party rule is dangerous, being a step removed from an oligarchy, and two steps from a dictatorship.  Yet, these days it's pretty clear both major U.S. political parties are hell bent on achieving (and A-OK with) this kind of domestic domination as long as their party is that party.

Even when one party control happens in Washington (e.g. 2017-2018), it doesn't end well because it's ephemeral.  Show me a "Tea Party" and I'll show you "The Resistance."  And should a blue wave hit again in 2020, you can bet all you own and all you can borrow that the next iteration of a minority siege engine will be even nastier and more toxic than ever before. Resulting in accusations and recriminations, followed by roadblocks, deadlocks, and aftershocks; political anarchy becomes the new normal.  And on and on and on, as our 200+ year experiment in democracy circles the drain.

Who thinks this is swell?  Moscow, Beijing, Tehran, and Pyongyang, to name a few.

Donald Trump scares me.  I’m far from alone in this.  But if you think --that given his record-- Trump doesn’t stand a chance of getting re-elected in 2020, you’re living in 2016.  Perhaps you've noticed that despite a barrage of perpetual outrage, a Teflon Donald has emerged; nothing's sticking.  Populism worldwide isn't declining, it's on the rise, and according to the Institute for Global Change, voters aren't restoring democracy after populists have either won or seized power, quite the opposite; they're there to stay.

In April, Barack Obama warned Democrats they're forming up a "circular firing squad."  Our presidential "debates" have devolved into beauty pageants with the media declaring victory for whoever scores the best quip.  If this is the metric of success, Democrats should just nominate Jon Stewart and be done with it.  Else, a parade of pundits split-screened on CNN, Fox News, MSNBC, etc., reward style over substance by pontificating on who's most likely to succeed!  The problem is these pundits are actually shaping public opinion.  And as these democratic candidates do whatever they think necessary to win a nomination, they’re almost assuring they lose the presidency.

What we all need to really come to terms with is our electoral process is no longer about what presidential candidates are, it's all about what they aren't.  No one exploits "high negatives" like the GOP (OK, maybe the Russians).  Think about it.  Gore=Flake, Kerry=Fake, and Hillary=Bitch.  It's sad but true, made more ironic because two of these three actually won the popular vote.

Why did Joe Biden shoot to the top of the polls after throwing his hat in the ring?  Because in their guts people believe he can beat Trump by wooing back those in the middle that bought into what Trump was selling in 2016.  Back when Trump said, "Nobody knew health care was so complicated," right around the same time people were realizing "Mexico will pay for the wall" was a fairy tale, more than a few (those not in complete denial) realized we, indeed, elected a grifter.

Again, Biden's initial ascendency was not about what he is, but about what he's isn't...  He's not an ultra Liberal, "coastal" yes, "elite" no.  He's perfectly summed up as an experienced "Moderate", but lately we're seeing a lot more of a hapless "Uncle Joe" stuttering his way through public appearances, as his popularity erodes because his initial base is looking for alternatives.

Has Bernie Sanders energized a voting bloc that previously sat silent, more or less, on the sidelines?  Yes.  I feel the Bern.  His irascible cut-the-BS persona is endearing.  Elizabeth Warren electrifies crowds with her casual but confident candor, and encyclopedic knowledge of policy.  And yes, she has plans, lots and lots of plans.  Is Pete Buttigieg a rising star with all the right political pedigrees and a Moderate to boot?..  Yes!  While I don't think most Angelinos (or Californians) care that Buttigieg is openly LGBTQ, there are voter blocs in other battleground states that do.  I wish it weren't so, because "Mayor Pete" is really good on his feet.

2020 is about three states: Wisconsin, Michigan, and Pennsylvania.

Unless the Democrats are really dumb (like completely neglecting Wisconsin in 2016), it's a safe bet every state that voted blue in 2016, stays blue next November.  If they want to ratchet down the vitriol, and somehow make America, America again, they best be putting up a moderate who can mend some fences and heal some wounds, regardless of who did the damage.

Wisconsin.  Michigan.  Pennsylvania.  No one gets to 270 electoral votes without them in 2020.  Take them away from Trump in 2016, and Hillary Clinton is the president.

The current 2020 Democratic front-runners are listed all over the Internet.  Steve Bullock isn't one of them.  Sure, he has a website laying out everything he stands for and who he says he is.  I don't care and neither should democratic voters at this point.  They should care about what he's not ...  An ultra liberal, political novice, coastal elite, tax-and-spend democrat, anti-gun, one trick pony, "libtard" or any other high negatives barbs that are sure to get fired at the other Democratic front-runners, should they be nominated.  Vulnerabilities exploited in swing states with an onslaught of media paid for by the cash haul Trump is reeling in from very rich people he helped make way richer than ever with the "Tax Cuts and Jobs Act" running up our national debt faster than we can count in million dollar increments.

In other words, Liberals, far left or otherwise, are easy targets.

In Montana, a state where Trump trounced Hillary Clinton, Bullock was elected (and then reelected) as a Democrat governor.  Here's someone who's been able to transcend our partisan divide and it doesn't seem to matter.  Sure, Montana has 3 whole electoral votes and barely qualifies as a "flyover state."  However, Biden's Delaware has 3 electoral votes and so does Bernie's Vermont, both of which are already reliably blue.

Bullock easily paints WI, MI and PA from red to blue in 2020.  And probably a few others ready to flip for the "right" Democrat that doesn't tick any of the high-negative boxes the GOP delights in exploiting.  His messaging is simple:  I-Beat-Trump, which he has been criticized for because where's the vision in that?

Common sense is not common.

Democrats need to get over themselves with lofty "visions" and "plans" and promises at this point in the game.  Gore, Kerry and Hillary Clinton all had visions and plans, and they all lost.

The GOP plays to win. They're not hamstrung by having to sell voters on Trump's vision or any real plan on how to deliver it, because we know what Trump's reality is, and more than 50% of the Electoral College seems fine with it.  Mitch McConnell isn't losing any sleep over spiking Merrick Garland's SCOTUS nomination.  McConnell understands history is written by the winners.

My biggest fear is NPR’ll lull me awake on November 4, 2020 with someone saying, "It's the economy stupid."  It's Steven K. Bannon, and I'm not dreaming.

(Mark F. Mauceri is the General Manager of Air Support Group; a content programming and marketing strategy firm.  He lives in Los Feliz and is an occasional CityWatch contributor.)