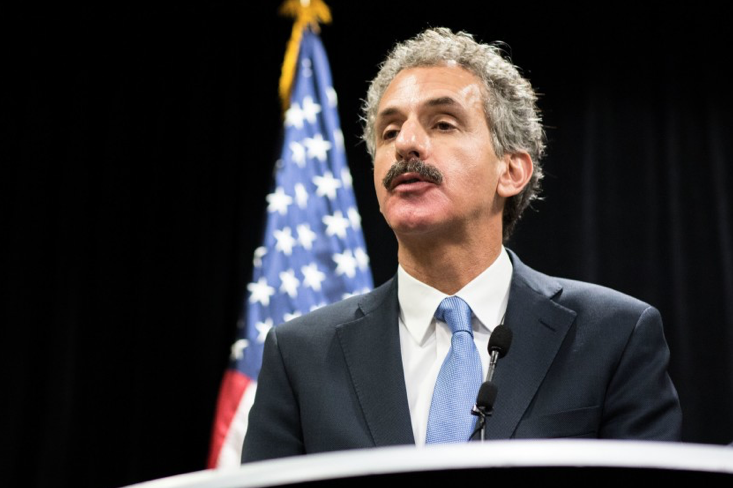 GUEST WORDS--In a blue state, in a blue city, on the Bruin blue campus of a public university system that once gave rise to the Free Speech Movement, why were the UCLA administration and Los Angeles City Attorney Mike Feuer, a liberal Democrat, bent on charging and jailing four young protesters for briefly interrupting a 2018 campus speaking appearance by U.S. Treasury Secretary Steve Mnuchin?

The four defendants—Justin Ullman, Nayely Rolón-Gomez, Yesenia Antonio, and Elise Kelder—were members of Refuse Fascism and the Revolution Club, two spinoff projects of the Revolutionary Communist Party, a tiny Maoist-Stalinist sect with roots in the now-old New Left of the late 1960s.

On Friday afternoon, Oct. 11, 2019, they were acquitted, after barely two days of jury deliberations, on all counts of disturbing the peace, trespassing, and violating a questionable campus ban.

Judge Christopher Dybwad dropped three additional counts of resisting arrest when the prosecutors sheepishly revealed on the eve of closing arguments that UCLA had improperly withheld from them, and the court, internal reports documenting how the UCLA officers’ use of force had injured the protesters as they were dragged out.

The two-week trial, which cut to the heart of the free exercise of First Amendment rights, inexplicably was virtually blacked out by the Los Angeles news media. Not a single reporter was on hand to cover it; no reporting followed.

The scene did not lack for drama.

As the court clerk methodically read out the verdicts, the four defendants gasped. When it gradually became clear that the jury was on track for a full and complete acquittal, they clasped one another in giddy relief, and warmly shook hands with their attorneys.

Three of the defendants, all women of color, broke out in wide smiles; their Anglo male co-defendant visibly choked up, daubed away tears, and in a breaking voice thanked the jury. Several jurors rushed over to embrace the defendants.

One juror summed it all up when he commented afterward: “I don’t know why they even prosecuted the case. It was a complete waste of taxpayer money.”

The city attorney’s office did not respond to repeated requests for an explanation.

Maybe that’s because in recent years, under Feuer and his predecessor Carmen Trutanich, the office has made something of a cottage industry out of prosecuting political protesters, in particular immigrant-rights and police-reform activists.

They’ve repeatedly failed, dropping charges, facing hung juries and mistrials, and even an outright acquittal in this latest case.

In the past, the city attorney has cited the need to protect free-speech rights for everyone, including elected officials, witnesses, and the audience—as well as threats to public safety, such as protesters who chain themselves together to block traffic on busy downtown streets, or unfurl banners to halt traffic on a downtown freeway interchange.

But protecting public officials from actual physical assaults like throwing a loved one’s ashes or vials of blood at them, ensuring orderly conduct of public business, or civility at guest lectures need not involve reckless prosecutorial overreach and blatant violations of protected activity under the First Amendment.

As press deputy for three Los Angeles County supervisors, over the course of 26 years I personally attended more than 1,200 weekly public board meetings. I’ve seen my share of inappropriate and disruptive behavior.

Speakers exceeded their time and had their microphone cut off, sometimes even refusing to leave the witness box. Gadflies sometimes hurled abuse, insults and expletives (but nothing more than that) at the supervisors. Rowdy audience members sometimes had to be quieted, calmed, and rarely, even physically removed so the public’s business could continue.

Never once, to my knowledge, was anyone ever criminally charged for any behavior that was expressive speech, however annoying and even offensive it might have been. Nor should they have been.

We never experienced an incident like that at UC Irvine, where in 2010 a group of Muslim students successfully mounted a concerted effort to shut down completely a scheduled speaking appearance by the Israeli ambassador Michael Oren.

And even then, Erwin Chemerinsky, then the UCI law school dean and a renowned constitutional scholar, argued against the Orange County district attorney’s criminal prosecution, saying the students’ subsequent administrative discipline was punishment enough.

In the majority of these cases, officialdom can appropriately deal with mere speech disturbances and disruptions through a little patience and a little indulgence of even rude speakers who, if they won’t stand down, can be asked to leave or physically removed from the venue so business can proceed.

In an era of unprecedented presidential lawlessness and abuse of power, throwing the book at a powerless few who try to speak out against it seems almost perverse.

There’s an ill wind blowing across our land, and you don’t need a weatherman—or a Maoist revolutionary—to know which way.

(Joel Bellman worked for nearly four decades as a print and broadcast journalist, and political communicator. He writes on politics, culture, and the media,bellman.spjla@gmail.com. He wrote this commentary for CalMatters. It is reposted in CityWatch with permission of Mr. Bellman.)