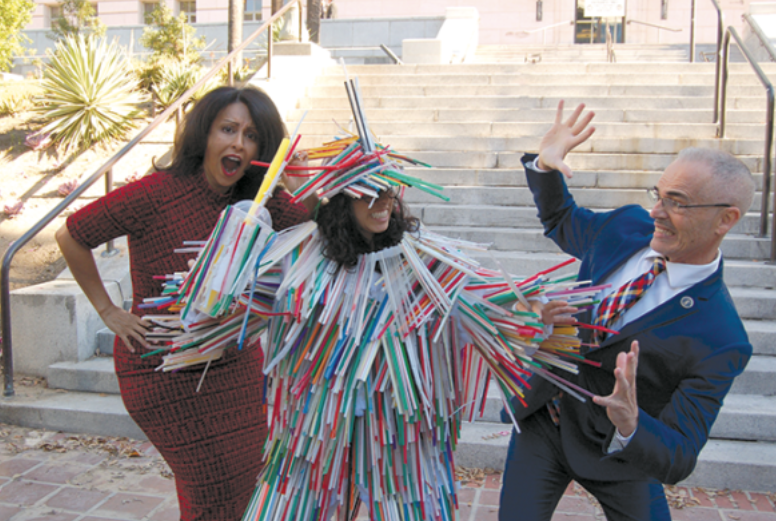 @THE GUSS REPORT-Thanks to John Kobylt and Ken Chiampou of “The John and Ken Show” on KFI AM-640 for having me on for a segment last week (at the 32 minute mark) about LA City Councilmember Mitch O’Farrell, (right in photo above) whose big “ta-da!” moment last week was his ridiculous ban on plastic straws...Phase 2!

Green is good but is used here to distract from far more important issues.

Never mind that there’s an ocean of humanity living alongside the 101 Freeway in O’Farrell’s District 13, and underneath the overpasses around Alvarado and other streets. Or in the middle of the LA River, where homeless people live and discard needles, human waste and abandoned Lime scooters which gum up the works and flow to the ocean.

It’s all about the straws, baby.

On the bright side, O’Farrell’s ban might be great for car detailers cleaning up soda spills for motorists trying to sip a drink without a straw.

Along his path to City Hall, O’Farrell – who was Mitch Farrell when he occasionally took college courses in the late 1970s – tacked an “O’” onto his last name, though he won’t say whether, why and when he legally changed his name to O’Farrell.

His cultural vagueness is reminiscent of an October 2011 interview he did with Patch in which he made no mention of his partial background as Native American or, for that matter, as a presumed Irishman. Instead, he spoke of his background as a dancer, Jamba Juice employee, working on his tan and how Monday was his day off in those days.  His ethnicity didn’t become a “thing” until later.

What Worries the LAPD?

The LAPD, which LA City Council president Herb Wesson has used as a roadblock to hinder this column’s corruption stories, now runs interference on my efforts claiming “unusual circumstances” exist that prevent it from complying with various inquiries.

Wesson denies this allegation, and recently approached me with an unsolicited and uncharacteristically angry outburst at a recent Council meeting, saying, “I told those motherf*ckers to leave you alone.”

But Wesson stormed away when I asked him why he remained silent when I repeatedly brought the LAPD’s harassment to his attention in recent years.

That’s because Wesson’s claim directly contradicts what sources inside the LAPD say, as they drew for me the line of harassment of this columnist from Wesson, through Harry Eddo, an LAPD detective who is LAPD’s liaison to City Council, to LAPD hierarchy.

But what might agitate the LAPD, Wesson, Mayor Eric Garcetti and other agencies like LA Animal Services, General Services and City Attorney Mike Feuer is my recent hiring of Paul Nicholas Boylan, a Davis, California, attorney with a track record of beating City Hall in court.

Sit with that for a while.

Another Councilmember pointed out that City Council should honor veterans more often, though this columnist can’t recall the last time said CM did that. But they need not wait until veterans are in their 90s and 100s.

There are plenty in LA from the Korean War, Vietnam, the Gulf War and more recent battles who are easily located living on the streets of LA, under the freeway, on Skid Row, on the curb outside of the VA hospital in West LA and everywhere else for that matter; the ones missing limbs and who need a hand with addiction, homelessness and PTSD.

The ones Mayor Eric Garcetti claimed would no longer be homeless by the end of his first term.

I will follow up with the CM’s office and let you know precisely when he walks that talk.

A Darker Shade of Tom LaBonge

City Hall’s favorite confused and seemingly tipsy uncle, former LA City Councilmember Tom LaBonge, showed up with notably less gray but the same frenetic energy to share his thoughts on the 100th anniversary of Musso and Frank, the oldest restaurant in LA.

The City Council video archive is down this weekend, but when the video is back up and provided in an upcoming column, you’ll wonder whether the arms of the servers LaBonge grabbed, yanked, flailed and torqued during his comments were ever released.

LaBonge is the guy who attempted to destroy virtually all his office records and give away a mountain of taxpayer money during his last hours in office only to have those shady efforts reversed and shamefully exposed.

A Lighter Shade of South LA

In recent weeks, this column took up the cause of an African American cultural hub in South LA called the AFIBA Center, evicted from its decades-long home while its representative on City Council, Marqueece Harris-Dawson, remained silent during scores of complaints from constituents about being muscled out by “white,” i.e., corporate-financed, businesses.

Wesson, too, has ignored those concerns despite running for LA County Supervisor for the District that includes the AFIBA Center.

As this columnist has predicted, City Hall’s disregard is the tip of the iceberg for black Angelenos. There is a coming land-grab for the oversized, under-valued residential land in the historically African American parts of the City and County of LA.

It sneaks up on a community with a slow crawl.

For example, a neighbor of mine recently sold her house in Sherman Oaks without a pool or garage for $900,000. A few blocks away, out of a group of 38 homes, sixteen were recently bought, torn down and replaced with multi-million-dollar McMansions despite all the supposed protections against them.

It used to be that McMansions were located in Sherman Oaks on pricey streets South of Ventura Boulevard. Now they’re north of it. And the street with all those McMansions is remarkably located even further north, past the 101 freeway.

A similar takeover seems headed for traditionally black residential communities in South LA. If that happens, it will be big, tragic, unstoppable and no surprise at all because it is being planned right now with the blessing of the same politicians who keep getting re-elected. Let’s revisit this prediction in five or ten years, as a big money mindset descends on those large lots with enormous profit potential.