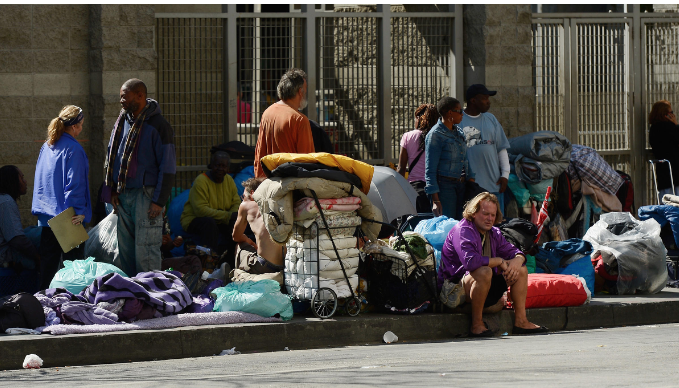 ALPERN AT LARGE--I've never met Scott Presler, who is a Virginia activist that spends an extraordinary amount of time cleaning up and bringing hope to the homeless and the forgotten amongst us.

He has no idea I am writing this article. Yet will I remain a fan of his efforts?  Why YES, because he has done a great thing out of selfless love and devotion to his fellow man.

The voters of Measures HHH and H did NOT want a permanent Homeless Initiative with the primary intention to give new public sector employees permanent and endless funding for their salaries and pensions...they wanted to fix the homeless crisis and help those in need of mental illness medications and counseling.

So along comes Scott Presler, a gay Trump supporter from northern Virginia who came out publicly after the Pulse Nightclub shooting With a small army of gay, straight, trans volunteers, and with a diverse background of ethnicities, Presler organized a cleanup last Saturday that removed 50 tons of trash from a huge Los Angeles homeless encampment.

They wore hazmat suits and literally shoveled human excrement and other waste on a hot Saturday while the rest of us slept, rested, had fun, and enjoyed our weekend. Folks came from all over the Southland (connected with social media) to this event, for which Presler was inspired by the Reverend Andy Bales, who is the CEO of a Christian homeless shelter called the Union Rescue Mission.

Previously, Presler had cleaned up a West Baltimore homeless camp, and was labeled as merely a "right-wing extremist" for his volunteer efforts, and it's to be wondered whether the Salvation Army and other Christian homeless shelters, who shelter homeless of all ethnicities and sexual orientations, are merely "right-wing extremists".

Seriously...cleaning up homeless shelters as a volunteer effort makes one an extremist? Are they merely a--hats who are to be condemned?

Or do we need a few more extremists?

Or, do we rely on billions of dollars, and years of wasted efforts, from folks like Mayor Garcetti and Governor Newsom who, in their ineptitude and conflicts of interest, either:

1) Are completely clueless about how to cost-effectively shelter, counsel, and monitor those who are incapable of helping themselves.

2) Are absolutely OK with creating, promoting, and indefinitely extending the homeless crisis to create another governmental bureaucracy with no motivation to FIX the problem of mental illness, drug abuse, and a new generation of forgotten souls.

Because spending tens to hundreds of thousands of dollars per housing unit without job, medical, and counseling support to anyone who does get off the street doesn't fix anything.

And in both West Baltimore and in Los Angeles, both the homeless and their newfound allies came together as human beings for a greater good. Yes, some wore MAGA-hats, as reported by lawyer and journalist Christopher LeGras, but most there did not, and probably held wildly divergent political beliefs.

Because it's doubtful that the "leadership" of either the City of Los Angeles, the County of Los Angeles, or the State of California has any clue as to how to fix just about anything, let alone our confounding homeless problem.

On a final note, I have to throw in the "...and I'm a doctor" point, because as someone who's seen and treated more homeless and Medi-Cal patients than most dermatologists, I'm pretty familiar with the nuances of the homeless problem. Hence, I again bring up the points that Dr. Drew Pinsky has raised about our homeless problem.

It's a medical problem, a mental health problem, and an infectious disease problem.

It's NOT so much an affordable housing problem, which is a huge problem of its own--those living in their cars without mental illness or substance abuse problems merit their own solutions, and many just move to more affordable parts of the state or to other states.

There's a time to selfishly go with the "let no crisis go to waste" for our political leaders.

And then there's a time to FIX the damned problem, because to do otherwise is to forfeit our own humanity.

God bless you, Scott Presler, and God bless all those nameless, selfless individuals who showed a few souls in Los Angeles that they were not discarded amidst the trash of their homeless encampment.

And to those who will decry Presler and his fellow volunteers who are gay, straight, black, white, Latino, and Asian, simply because he has a personal political point of view that you may not agree with...