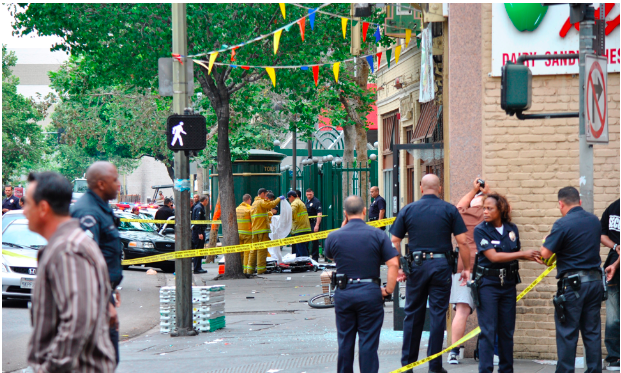 Planning Watch: The record of California Democrats on the housing crisis, including those who run city governments, like Los Angeles, is not good.

Their homeless sweeps, bans on sidewalk sleeping, and giveaways to developers have sullied their reputation.  Other than outliers, like Representative Maxine Waters and her $13.3 billion Federal proposal to address homelessness, most California officials linked to the Democratic Party offer Reaganesque solutions.  (Photo above: LAPD and Bureau of Sanitation homeless sweep in deep blue Los Angeles.)

Their supply-side programs will enrich their political patrons, but, unfortunately, make the state’s housing crisis worse.   When not removing homeless encampments and barring sleeping in public areas, the LA City Council has either proposed or adopted a host of ordinances to green-light real estate speculation.  These programs worsen the city’s homeless crisis, which grew 16 percent over the past year.  Meanwhile, higher up on the donor food chain, Democrats in Sacramento adopted several statewide gentrification bills, most notably SB 330.

Lucky for these gentrifiers, Mr. Trump and his representatives came to Los Angeles and unintentionally bailed them – at least politically.

Even though Mayor Eric Garcetti welcomed the Trump delegation, most other local and state Democratic officials dismissed their visit as publicity stunt.  They accused them of targeting big cities, like LA, which are run by Democrats.  According to the LA Times, most Democratic officials – for good reason -- remained highly skeptical.  A week later, after Trump’s Tuesday visit, their skepticism remains, even though his housing proposals hardly differ from their own.  They both want the deregulation of zoning and environmental laws to supposedly increase the supply of (market-rate) housing.

Nevertheless, Mayor Garcetti and Governor Newsom’s offices issued statements listing actions that the Trump administration could take if it were serious about homelessness.  For example, the Governor’s spokesperson said, “He could start by ending his plans to cut food stamps, gut healthcare for low-income people, and scare immigrant families from accessing government services.”

Sacramento Mayor Darrell Steinberg remarked, “We need them to stand up big time on the resource side.”  In the same vein, LA’s Councilperson Gil Garcetti told the LAT, “We’re interested in building housing, and finding shelter, and transitioning people who are going through really difficult times.  And, it requires more than a token appearance.”

Other officials, like LA County Supervisor Mark Ridley Thomas, stated that California needed the president to declare a state of emergency.  This would unleash Federal funds to address homelessness, but Ridley Thomas feared these funds would be used to clear out homeless camps and shelters.  Others speculated that the Trump Administration’s model would be its immigrant prisons, like Adelanto, which are located far from urban centers.  Similarly, retired UCLA law professor, Gary Blasi, told the LA Times that the Trump administration’s approach would be homeless sweeps to end visible homelessness, not homelessness itself.

California: Reminiscent of the adage that when you point you finger at someone else, there are three fingers pointing back at you, let us take a quick look at the dark underside of Democratic officials’ homeless policies and practices.  What they say and what they do are hardly the same.

The most revealing action is Senate Bill 330, sponsored by Democratic Senator Nancy Skinner, adopted by the State legislature, and waiting for Governor Newsom’s signature or veto.  Largely supported by the California Building Industry Association and the California Association of Realtors, SB 330 is based on the trickle-down economic theory espoused by Presidents Ronald Reagan and Bill Clinton.  SB 330 is bound to make the State’s housing crisis worse, not better.  Echoing both Mr. Trump and their real estate industry patrons, SB 330’s political supporters claim government regulations – in this case local zoning, planning, and environmental laws – impede housing production.  If curtailed by State law, housing production would zoom, and California’s housing crisis would melt away. SB 330 would allow the following:

Furthermore, even though the bill’s supporters invoke California’s very real housing crisis to justify SB 330, the legislation does not require the State or local municipalities to monitor housing construction, costs, vacancy rates, or rents.  It also does not require developers to include any low-income units in their projects.

In Los Angeles, like Sacramento, there is no shortage of ordinances fueling the housing crisis while claiming to solve it.

Homeless sleeping bans:  Some are brazen, such as a proposed municipal ordinance to ban outdoor sleeping in 124 square miles of Los Angeles, especially in public areas near parks, schools, libraries, day care centers, sidewalks, and alleys.

One of LA’s proposed no public sleeping areas for the homeless.

In Hollywood, shown above, 49 percent of the community would be out-of-bounds.

Other schemes are less blatant, but just as damaging:

Community Plan Updates:  For example, the stalled second update of the Hollywood Community Plan would upzone hundreds of parcels.  Like the previous Plan update and zoning ordinance, totally rejected by Superior Court Judge Allan Goodman in 2012, its reincarnation will likely meet the same fate.

Transit Neighborhood Plans, concocted by LA City Planning and partially funded but not endorsed by METRO, would substantially upzone transit-adjacent neighborhoods, like Miracle Mile and Beverly-Fairfax.  To pull this off, City Planning is trying, despite enormous community opposition, to adopt these increases in the heights, mass, and density of commercial and residential properties prior to the parallel update of the Wilshire Community Plan.  City Hall is pursuing this end run so expensive, high rise market housing can be fast-tracked in neighborhoods near the Purple Line Extension.  The swept-under-the-carpet consequences of this real estate scam would be displacement of low-income transit riders, increased traffic jams and air pollution, and more homelessness.  Unlike enriched property owners and investors, this “progress” would be dumped on those who live, work, visit, and pitch their tents in these gentrifying neighborhoods.

Transit Oriented Communities Guidelines (TOC) are the newest version of the SB 1818 density bonus program.  Legally challenged by Fix the City, the TOC Guidelines allow real estate developers to evade discretionary zoning processes, such as zone variances and zone changes, by pledging to include low-income rental units in their new market rate apartment buildings.  As for the actual rents of these promised low-income units, or the low-income qualifications of tenants, good luck in tracking down this information.  This is because no one from LA’s Housing and Community Investment Department ever field checks density bonus apartment buildings.  Furthermore, City Hall does not inform nearby community residents of this chicanery through public notices, hearings, votes by decision makers, and appeals.  In cases where the Department of City Planning writes a decision/determination letter, only adjacent property owners receive copies.  In some cases, neighbors do not know about density bonus projects until the bulldozers show up.

Re:code LA is a stalled $5,000,000 plus program to accelerate Los Angeles Municipal Code handling of discretionary zoning cases.  These code changes are complex, and one staff report alone weighed in at 948 pages.  Community experts estimate these gifts to developers cost City Hall $13 million in contracts to a private law firm.

The other part of re:code LA is the wholesale revamping of LA’s complex Zoning Code. The proposed alternative is based on Form Based Zoning, through which a greater range of uses would be permitted for each parcel.  When finally completed, these zone changes will – big surprise -- inflate property values,  fortified by increased building size and reduced on-site parking requirements.

Each of these local ordinances allows for larger, denser, more profitable commercial and residential buildings in choice locations, at the expense of existing residents and small businesses.  Project review requirements, including the California Environmental Quality Act, are shunted aside, as investors turn to LA and similar cities for quick, lucrative real estate deals -- before the next crash kills the goose that lays their golden eggs.

Could Donald Trump and those who discreetly agree with him be any happier?

(Dick Platkin is a former Los Angeles city planner who reports on local planning issues for CityWatchLA.  He serves on the board of United Neighborhoods of Los Angeles (UN4LA) and welcomes comments and corrections at rhplatkin@gmail.com.  Selected previous columns are available through the CityWatchLA archives and the blog, Plan-it Los Angeles. )