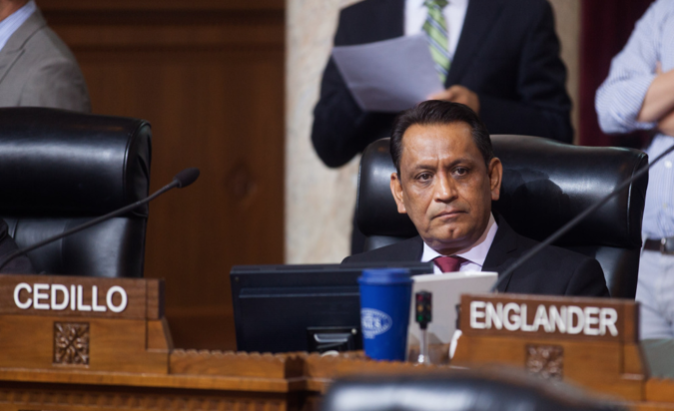 In California, vote trading, a form of bribery, is a felony offense.

Cedillo, in trying to slow down a controversial homeless development project in councilmember Mitch O'Farrell's district, urged his colleagues to ignore an "unwritten rule" that ergo unofficially compels them to vote in lockstep with O'Farrell, regardless of the particulars of the issue.

According the LA Times: "Council members usually defer to the politician who represents the area... when housing or other development projects are planned in their districts."

They "usually defer."  Of course they do.  Aside from Cedillo and councilmember Joe Buscaino, our city council did overwhelmingly defer to O'Farrell and voted to green light the controversial project.  It is O'Farrell's district after all.  Besides, slowing down a homeless housing project these days is a tough sell.

But that's not the point.

The fact our city council votes unanimously on most issues most of the time is indicative of its underlying go-along-to-get-along culture, and this "district deference" is not news either.  However...   California's Penal Code, section 86, defines the ethical and legal boundaries for what constitutes bribery and vote-trading.

Essentially, when an official vote in favor of a district project of a fellow colleague with a general understanding they'll be paid back with similar consideration later- like the kind you would find in a unwritten rule-- vote-trading (if not outright bribery) has occurred.

Incentives need not be the traditional forms of cash, goods, services or political favors; it's simply a quid pro quo, like "my vote now for your vote later."  Cedillo, in his Hail Mary plea, acknowledges this sort of deference is standard operating procedure amongst city councilmembers.  If it weren’t, why would he even ask?

How serious is this?  Vote-trading is punishable with forfeiture of office and forever being disqualified from holding any office.

Did any member of the city council rise and declare their umbrage at such a thinly veiled allegation of not so kosher, traditional, favoritism?  Nope, not a one.

Of course, vote trading is normally hard to prove.  The rule is unwritten, and I doubt any enforceable contracts are written and then signed.  But what if a legislator (say Cedillo?), in full public view, urges his colleagues to break with tradition and instead abide by the law?  Like he did on Wednesday!  Can we the public dare to expect some official oversight (or perhaps a free and independent press) to follow up and ask, "Tell us more about this unwritten rule of yours?"  Probably not.

The city's Ethics Commission amounts to a paper tiger with the speed and agility of a glacier, and the City Attorney office declares their mission is to protect the City from legal action, not invite it.

Finally, unless there's a proverbial "smoking gun" actually found in the hand of "perpetrator" who's saying, "Yeah, I did it," LA's free and independent press seems they can't be bothered with digging any deeper into anything that happens at 200 Spring Street.

(Mark Mauceri is a member of the Los Feliz Neighborhood Council and can be reached at mfmauceri@mac.com.)