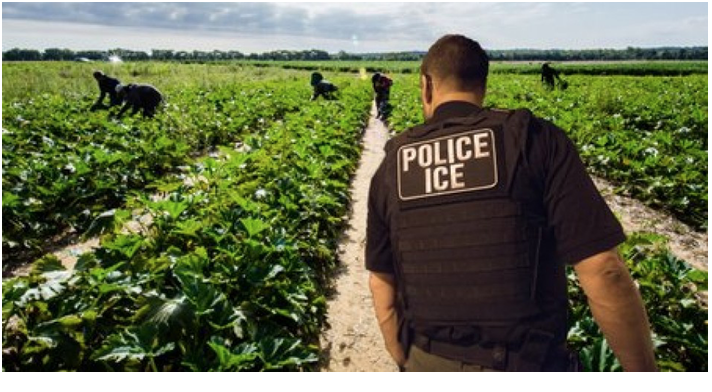 IMMIGRATION POLITICS--Days after the Aug. 7 immigration raids in which approximately 680 people were arrested in poultry plants across Mississippi,

federal court documents were unsealed that publicly revealed the evidence that led a judge to authorize the raids, the largest single-state immigration enforcement action in U.S. history.

The documents allege, among other things, that the raided plants were employing workers with electronic ankle monitors; hiring the same individuals multiple times under different identity documents; and outsourcing recruitment and identity verification to third party payroll contractors.

All of these practices are common knowledge among those of us long acquainted with the poultry industry’s employment practices.

Undocumented immigrants are sustaining our own families, breaking their backs as the backbone of America’s industrial food chain.

From California to Maine, and everywhere in-between, employers are willfully hiring unauthorized workers who are desperate for stable jobs to feed their families. In doing so, undocumented immigrants are sustaining our own families, breaking their backs as the backbone of America’s industrial food chain.

And while pundits continue the tired debate over whether we should fault immigrants for working without authorization or blame employers for turning a blind eye to their hiring, readers may be surprised to learn that undocumented employment has not always been a crime.

In 1986, Congress passed the Immigration Reform and Control Act. Besides enacting the country’s last sweeping amnesty program, covering approximately three million undocumented individuals, the act made it illegal to knowingly hire workers without employment authorization and implemented a system of “employer sanctions” against those who do so.

But instead of curbing the employment of unauthorized labor, these sanctions served to force many workers into the shadows, expand the underground economy, create a black market of document fraud, undermine workers’ abilities to advocate for themselves and drive conditions down for everyone. By establishing immigrant “illegality” in the workplace, the law emboldened corporations to intimidate and exploit undocumented laborers.

The proliferation of the web-based employment authorization verification system E-Verify over the past decade has only intensified these problems. Requiring that all job applicants pass a check that their Social Security number is valid has fueled a boom in identity loan, identity sharing and identity theft, sometimes arranged by employers themselves.

In my six years collaborating with the Mississippi Poultry Workers’ Center from 2002 to 2008, I learned that passing laws prohibiting the employment of any group of vulnerable workers will not curb the practice of their hiring. Rather, such legislation only makes them more exploitable, more likely to accept low pay and poor working conditions and less able to organize for a safer and more secure workplace.

Employers in low-wage industries will continue to willfully hire these workers not because they are “bad” people or want to break the law, but because their bottom line depends on keeping labor costs to a minimum.

Such practices affect all workers, immigrant and U.S.-born alike, putting the latter in a position to either accept deteriorating pay and workplace standards or risk being replaced.

A third of a century with the Immigration Reform and Control Act’s employer sanctions should teach us one thing: criminalizing undocumented labor is not the answer. Labor abuses run rampant in the poultry industry, fueled by an economic system that is accountable only to the owners and shareholders of corporations.

Workplace raids like those in Mississippi devastate long-standing communities in which immigrants are integral to the fabric of their neighborhoods, schools and churches.

Instead, we need an economic system that answers to working people; an immigration system that enables newcomers to put down roots and become wholly enfranchised members of our communities; and a legal system that enforces labor and employment laws to protect both.