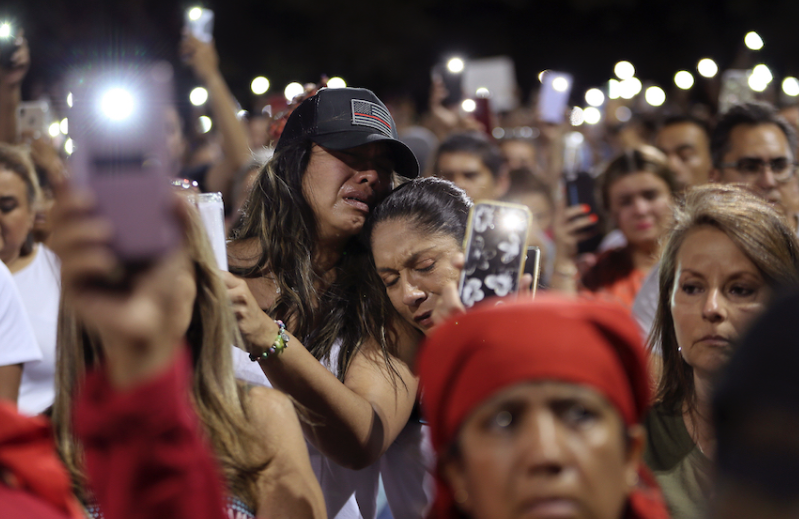 SOMETHING’S WRONG HERE-“Many people think that the fight for America is already lost. They couldn’t be more wrong.

This is just the beginning of the fight for America and Europe. I am honored to head the fight to reclaim my country from destruction.”

This is how the El Paso killer ended his white supremacy screed, posted just before he “went in” and killed 22 “invaders” who were shopping at a Walmart’s store this past weekend. And, as everyone knows, half a day later another armed maniac wearing body armor and sporting a semiautomatic went on a shooting rampage outside a bar in Dayton, Ohio, killing nine and wounding 26. And a few days earlier, a gunman killed three people, including two children, at a festival in Gilroy, Calif.

So what else is new? Should we sing the national anthem?

Something is terribly wrong in this country of almost 400 million guns  — wrong beyond solution by gun control or increased security measures . . . at shopping malls, schools, garlic festivals, churches, temples, synagogues and everywhere else. Americans are killing each other at an average of one mass shooting a day.  How is this possible? What poison is permeating the social infrastructure?

Nearly seven years ago, after the horrific shootings at Sandy Hook Elementary School, sociologist Peter Turchin called the nation’s mass murders, which have been increasing at a dizzying rate over the last half century, “canaries in a coal mine.”

He wrote: “The reason we should be worried about rampages . . . is because they are surface indicators of highly troubling negative trends working their way through deep levels of our society.”

In other words, tragic and horrifying as such events are in and of themselves, they are also collective signals of some deeply embedded flaw in the social infrastructure that must be discovered and addressed. Racism is only part of it. Guns are only part of it.

Consider the media consensus after the El Paso shootings that it was also a “hate crime.” Was this supposed to ramp up its level of seriousness? Innocent people are dead no matter what you call it. Pondering whether it should be considered a hate crime seemed as nitpicky to me as pointing out that the shooter not only killed 22 people but parked his car illegally before entering Walmart.

Here’s what it was: a dehumanization crime. In every mass shooting rampage that has ever taken place, the killer had no personal connection to his victims. They weren’t people, they were either symbols of a social wrong with which he was obsessed or, at best, collateral damage.

Turchin called this “social substitutability” — substituting a particular group of people for a general wrong, proclaiming them enemies because of their ethnicity, religion, presence in a classroom or any other reason.

Engaging thus has another name. It’s called going to war.

“On the battlefield,” Turchin wrote, “you are supposed to try to kill a person whom you’ve never met before. You are not trying to kill this particular person, you are shooting because he is wearing the enemy uniform. . . . Enemy soldiers are socially substitutable.”

Writing in the wake of a mass murder way back in May (in Virginia Beach), I noted:  “War is a combination of dehumanizing and then killing an enemy along with any civilians in the way (a.k.a., collateral damage), and then glorifying the process: that is to say, it’s mass murder plus public relations.”

We’re celebrating the waving flag and the national anthem, the glory and the bravery and the heroism. All this stirs the heart — especially the heart of a young man — like little else. All of which brings me back to the El Paso killer’s screed. He was going off, fully armed, to a shopping mall to kill moms and dads buying school supplies for their kids in order “to reclaim my country from destruction.”

He was playing war. My guess is that they’re all playing war, in one way or another. Whether or not the mass murderer is a vet — and a large percentage of them are — they are giving meaning to their lives by turning their anger and despair into a military operation. When we mix racism in with the easy availability of lethal weaponry, it turns into terrorism, which is to say, collective lunacy — a lunacy surpassed in its scope and human cost only by the lunacy of war itself.

So my question is this: Why can’t we talk about this at the national level? How many minutes of the last two Democratic presidential debates were devoted to the defense budget or nuclear weapons or the 21st-century phenomenon of endless war? Tulsi Gabbard, a vet, used about a minute of her time to address the issue, taking a clear stand against our regime-change wars. Otherwise . . . nada.

Does anyone think that lockdown drills in the public schools or security checks at shopping malls (a recent New Yorker cartoon depicted a woman in a grocery checkout line removing her shoes and putting them on the conveyor belt) will keep us safe? Does anyone believe that our current political system is capable of addressing the prevalence of war and the trillion dollars-plus we hemorrhage annually for “national defense” and prisons and “border security”?

Does anyone doubt that the mass murders will continue?

(Robert Koehler (koehlercw@gmail.com) is a CityWatch contributor, syndicated by PeaceVoice, is a Chicago award-winning journalist and editor. He is the author of Courage Grows Strong at the Wound.) Prepped for CityWatch by Linda Abrams.