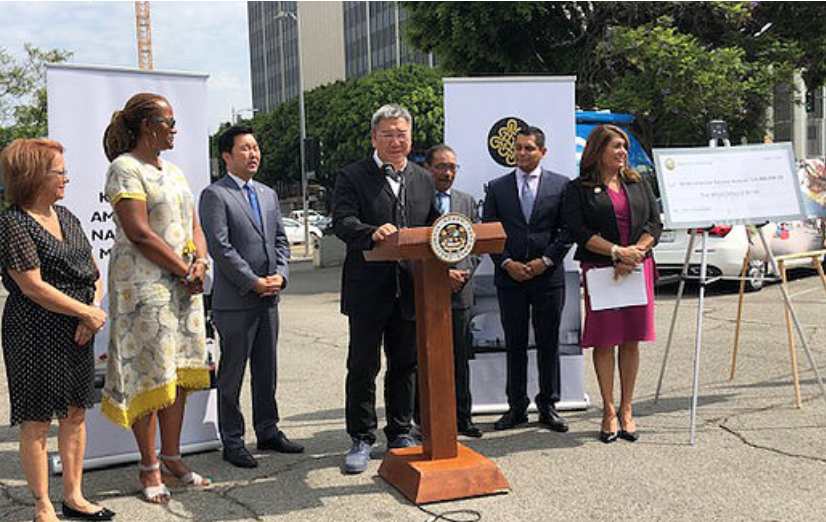 THE GUSS REPORT-One of my favorite Mark Twain observations is “politicians and diapers must be changed frequently, and for the same reason.”

While Twain took the last train out of Dodge nearly 40,000 days ago – trust me, I did the math – his observation still applies to modern day Los Angeles politicians. Take, for instance, these recent head-scratchers:

I received a press release last week from the office of LA-based California State Assemblymember Miguel Santiago, announcing that he and California State Senator Maria Elena Durazo “fought in their respective houses to successfully secure $4 million . . . for the construction of a first-of-its-kind Korean American History museum.”

Isn’t that great? There is no doubt about the immense contributions Korean Americans have made across the U.S. and in Los Angeles, where their political influence is growing and getting stronger every year.

So I wondered, who was it that Santiago and Durazo “fought” for these funds, and what was their objection? When asked, Santiago's office admitted that there was virtually no resistance to it at all. “It’s a figure of speech,” they said.

That figure of speech also pointlessly claims an effort that was neither made nor necessary. In fact, it devalues and diminishes the very next time otherwise well-intentioned politicians are in a real fight.

Maybe this week they can explain why, since the Korean American National Museum (KANM) was founded in 1991, what Santiago and Durazo meant by “first-of-its-kind.” It’s like how LA City Council created Korean American Day, which is different than its Koreatown Day. Now that is a sign of long overdue respect by politicians who realize that they need to make nice with Koreatown before the next election.

To reiterate, we applaud the project. But we call full of crap to the sensationalist fiction of how the politicians “fought” to make it happen.

Among the politicians in attendance at the museum ceremony with the big, fake cardboard check for all that moolah was LA City Council president Herb Wesson, playing hooky from the city council meeting where he was supposed to be working last week.

For many years, Wesson has represented much of Koreatown, but just as often misrepresented it, like the time he took a scalpel to its borders (prior to running for re-election) to reduce its voting power.

Did that have to do with Wesson’s wish to defeat Korean American success stories, or to make it easier for his controversial son Justin Wesson, the one with the bogus voter registration history first exposed by this column, to run against an authentic K-town candidate like attorney and community leader Grace Yoo? With the younger Wesson finally changing his voter registration to South Pasadena – after years of falsely claiming he lived with mommy and daddy through his 30s, even into his marriage – LA’s Koreatown may finally be on its way to real, thoughtful and legitimate representation.

(No, we haven’t forgotten that the senior Wesson also got a K-town beatdown when he recently decided – without community input – where to put a homeless camp in the area, before eventually giving in to angered constituents. There’s only so many Wessonalities we can put in a single column.)

Fun Fact: Prior to Friday’s City Council meeting, Herb and I exchanged pleasantries about our friendlier days proving (if nothing else) that he is a politician to his core.

You know all those times and Tweets that LA Mayor Eric Garcetti claimed he is hunkering down to get to the root of LA’s problems? And every time he did, his sycophants at the LA Times dutifully parroted it, and it was then echoed by news desks in need of content.

It was a load of bunkum, at least according to Garcetti’s Tweets over the weekend showing him hunkering down – with Jorge Bergoglio, a.k.a., Pope Francis at the Vatican.

Hey man, way to use those tax dollars wisely.   Did the Pontiff give advice on bike lanes and road diets?   We know that the Pope is big on kindness to animals.  Did Garcetti ask him whether it was sinful of him to falsify thousands of pet adoption stats?   Did he get advice on disinfecting the sidewalks outside of LA City Hall?  Did he get lessons on praying that the FBI doesn’t have him in its crosshairs?  And how about that awkward photo of Eric and El Santo Padre?

Why, it’s almost as awkward as that time a few months ago when Garcetti – TV cameras in tow – knelt down to greet a young Muslim boy at the Islamic Center of Southern California, saying “I’m your Mayor!” and then, after getting the photo op of their high-five, wiping his hand on his jacket. Ouchie.

A Political Endorsement that Literally Means Nothing

A few weeks ago, Jan Perry’s campaign for LA County Supervisor sent out a blast saying that she received the endorsement of LA City Councilmember Greig Smith. I had a brief interview with Smith in the back hallways of City Council where he praised Perry’s thoughtfulness, considerable leadership abilities and accomplishments during their years of working together.

A day or so later, Wesson’s campaign blasted out that Smith and everyone else on City Council endorsed him unanimously. Both campaigns told the truth.

(Smith has temporarily filled the CD-12 seat for the past several months. His successor will be determined this week.)

Is the LAPD full of SLAPP?

A few months ago, new LAPD Chief Michel Moore personally approved the reissuance of my press pass, which this column uses to get closer to stories of government corruption, failure and political self-dealing, resulting in stories that have been subsequently picked up by the LA Times, LA Weekly, KCBS, 790-KABC’s Peter Tilden and KFI-AM 640’s “John and Ken Show,” among others. I appreciate the Chief’s faith in this column.

So it’s a wonder that the office of LA City Attorney Mike Feuer is feverishly trying to quash my subpoena of Chief Moore in my lawsuit related to videotaped intimidation by the LAPD and a Deputy City Attorney repeatedly threatening to arrest me throughout the prior two years when I used my original press pass to access areas it specifically allowed me to go.

What in the world could this small-time columnist ask of an (under oath) Chief of Police, in an age of FBI raids and other mishegas, that would cause such anxiety in Feuer’s office, which was also recently raided by the FBI?

Apparently more than I realize, because they’re also trying very hard to quash my other subpoenas.   Moore has not yet accepted my invitation to sit down, address and resolve our issues. Then again, he hasn’t declined it, either.

There’s just never enough time or word count to share all the things I need to tell you. Have a great week.