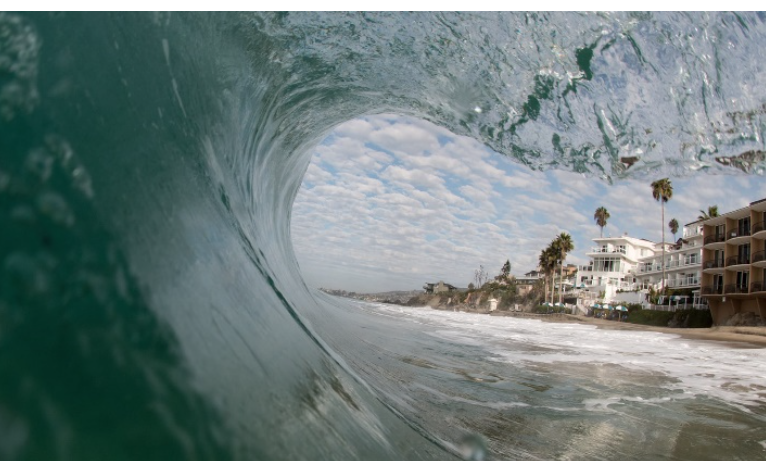 CLIMATE POLITICS--In this summer of alarming international climate news, it’s clear that California must adapt to its own growing threats.

Not only is the state becoming more susceptible to catastrophic wildfires and crop-killing drought, its coast is at risk of erosion. Earlier this month in Encinitas, on a popular surf beach north of San Diego, tons of sandstone crashed down on three beachgoers below, killing them. It wasn’t the first cliff collapse in the region, but experts say it could be a more common occurrence as California’s coast slowly disappears because of climate change.

The California Coastal Commission (CCC) last year released a revised Sea-Level Rise (SLR) Policy Guidance with projections that warn of the disappearance of two-thirds of beaches in Southern California alone. A 2018 report by the Union of Concerned Scientists, “Underwater: Rising Seas, Chronic Floods, and the Implications for US Coastal Real Estate,” estimates that 20,000 shoreline homes in California will be at risk by mid-century and that Marin, San Mateo and Orange counties are at the highest risk of inundation from sea water.

In the past California city planners have been largely reactive, reconstructing boardwalks lashed by winter storms. Now, with the long-term outlook for the coast coming into focus, the CCC is urging communities from San Diego to Humboldt counties to revise their Local Coastal Programs (LCP) to take comprehensive adaptive approaches in order to protect properties, tourism and public access to beaches.

Approximately 40 out of 70 coastal communities are in various stages of planning for sea-level rise, according to CCC coastal program manager Madeline Cavalieri.

“We say, take these first steps. Prepare community to let people make adjustments,” Cavalieri said, admitting there is no one-size-fits-all solution. “Adaptation strategies take a long time, decades of planning. And they have to be making plans continually, not just one plan.”

The commission can reject plans, said Cavalieri, and impose fines and unleash other legal actions on communities that run afoul of its guidelines. (Building illegal seawalls is the most common infraction.) But it cannot compel communities to make or revise their coastal plans.

“It’s important to come to a consensus,” said Tiffany Wise-West, sustainability and climate action manager for the city of Santa Cruz, “because without a plan we will be worse off.”

In 2016 the city started sea-level rise and vulnerability assessments, and last year updated its climate adaptation plan to address expected hazards, including addressing “sea caves,” or deep carve-outs under cliffs, which threaten a coastal road above. This year, with a grant from the CCC, it has initiated Resilient Coast Santa Cruz to address a threatened coastal road and protect beach use and access.

Wise-West added that the city has held four community information and sharing sessions this year on the topic, and to make sure there’s transparency and buy-in from neighbors up and down the coast, Santa Cruz belongs to a regional collaborative. And she says that adaptation plans will ensure that underrepresented and lower income groups continue to have access to beaches and recreation areas.

“Managed retreat,” or the planned movement of residences, companies and infrastructure away from areas threatened by erosion, is a term heard more and more by environmental experts and city planners. And not just in California, but anywhere coastlines are threatened by rising seas. But in California at least, it can be a technical or a political term depending on who you ask. For people with multimillion-dollar views of the ocean, managed retreat suggests giving up their investments. “The term is like kryptonite to many communities,” Cavalieri told Capital & Main. “They think it is cutting and running. But it is a very complex approach usually phased [in] over decades and generations.”

In June, Imperial Beach, a low-lying San Diego County city highly vulnerable to sea-level rise, announced that the update to its LCP would not include managed retreat as an adaptation strategy, a reversal from last year’s proposal. Another city in north San Diego County, Del Mar, is also facing homeowner unrest over talk of managed retreat, with residents backing the city’s Sea-level Rise Stakeholder Technical Advisory Committee, which said managed retreat means eminent domain and a loss of property value.

Del Mar’s newly crafted LCP amendments include an adaptation plan that features beach sand replenishment but expressly rejects managed retreat. The amendments, approved by the council in October 2018, not only forbade managed retreat but rejected “any proposed modification” by the Coastal Commission to recommend managed retreat from Del Mar’s coast.

San Mateo County, which includes 75 miles of rugged coastline south of San Francisco, as well as the bay coast, is one of the most affected areas in the state. A three-foot sea level rise could put five wastewater treatment plants and two airports, including San Francisco International airport, and other infrastructure at risk of flooding, according to its vulnerability assessment, released last year. Over the past several years, crumbling seaside cliffs in Pacifica required the city to demolish entire buildings to prevent them from falling onto the beach.

Jasneet Sharma, the county’s climate resiliency specialist, said that other parts of San Mateo’s coast are seeing less dramatic, but potentially more serious, erosion, including a residential road and significant loss of beaches. But she doesn’t blame the city of Pacifica for the demolished cliffside buildings there. “The dangers of climate change on the coast is an issue we are all trying to understand now,” she told Capital & Main. “The cities on the bay side of the county, fortunately, have a little more time to plan because they’re not yet in immediate danger.”

The county’s vulnerability assessment was only started in 2015, Sharma said. “The assessment was the easier part. The harder part is coming up with long-term solutions with a thoughtful and inclusive approach.” Though she said many cities in the county will come up with their own plans, the county is able to frame the issues to let cities know that they are all interconnected, to avoid one city moving its flooding and erosion problems to another city. “We say to cities on the bay side, ‘Your infrastructure may be on the coast, and if highway 101 is flooded, how will you get around?’”

“I don’t say take local planning away,” said Adrienne Alvord, Western States Director at the Union of Concerned Scientists. “But there must be better coordination between local and state zoning. Much of the knowledge of geology and geography is at the local level. But the state and federal taxpayers should not be on the hook for bad decisions made when there was good information that was not acted upon.”

Jennifer Savage, California Policy Manager for the Surfrider Foundation, said that as far as planning for sea-level rise, there are some bad decisions — and worse, no decisions — coming from some communities.

“Many cities [are] either saying, ‘We are not going to plan for the long term because it’s too hard’ or bending to short-term solutions that homeowners want, like more sea walls that destroy nearby beaches. I get it, because political cycles are short, and planning for sea-level rise is long term. If you tell residents with beachfront property that they’re going to have to move, you won’t get elected.”

The commission is the final arbiter of what does and what doesn’t get built along the coast. The California Coastal Act, passed in 1976, well before it was known how much climate change would impact the coast, said any existing development — which the Coastal Commission defines as prior to Jan. 1, 1977, the date the Coastal Act went into effect – can build a sea wall as protection, but nothing built after that date. Exceptions are where emergency walls need to be constructed to protect infrastructure only.

But some communities are testing those regulations, and a few, such as Pacific Grove, are trying to redefine “existing development” as anything existing when their local coastal plan is enacted, whether that is 2016, 2020, or 2030. In those cases, the commission has a variety of enforcement methods at its disposal. In Laguna Beach last year an illegal sea wall led the CCC to fine homeowners up to $1 million and order the wall’s demolition.

“Cities sometimes want the commission to come in and be the bad guy,” Savage said. “We need [Governor Gavin Newsom] to be more proactive in talking about sea-level rise, strong direction demanding long term planning that would put everyone on alert.” She added that a state fund, to buy out people with beachfront or cliff-front properties, may be necessary.

A few bills are currently under consideration in the state capital to address coming problems with sea-level rise. These include the appointment of a chief climate resilience office for the state, a plan to reuse dredged sand for restoration projects and a special fund for “coastal adaptation, access and resilience.”