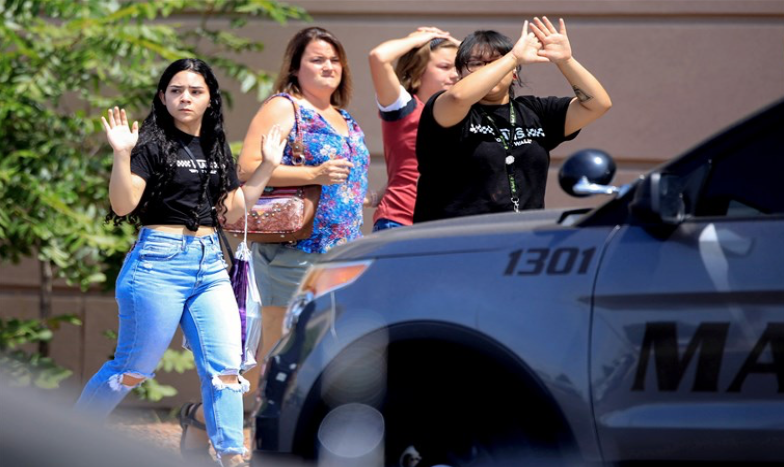 MY TURN--There are some things we should not have to discuss with our kids. Ever.

My daughter will be 16 in less than two weeks. She’s a good kid and, thankfully, very healthy. Sunday, August 4 was one of the hardest days we have had, however, as we tried to process the atrocity of three mass shootings in 24 hours. I never thought she’d ask me if I had an escape plan at work, as universities too are the sites of mass shootings. She disclosed that she thinks of how she will escape every time she goes into a public place—the mall, a restaurant, the movie theater. As she attends Florida Virtual School she has been spared the fear of getting shot at school, but she worries about her friends who attend public schools and do not have that luxury. She really wants to get a job when she is 16 but is concerned that anywhere can be a target.

My heart breaks for the many victims of this weekend’s mass shootings in El Paso, Dayton and Chicago. And it also breaks that our future—our kids—are growing up spending time identifying escape plans and evaluating whether it is safe to go out.

While gun control is a complex topic, one my daughter recognizes as such given the differences between mass shootings, accidental killings, suicides and other types of gun-related incidents, she cannot fathom why we would not have a ban on assault weapons. Although I explain to her that the previous assault weapon ban, which passed in 1994 and expired in 2004 had some significant loopholes, experts agree that it probably did save lives. As usual, determining exactly how much effect a law has is tricky, given that crime rates fluctuate for many reasons unrelated to law and mass shootings, albeit horrific, represent a fairly small percentage of overall gun-related injuries and fatalities. Nevertheless, it is quite possible to fix the loopholes with that version, which featured complicated descriptions of which firearms were actually prohibited, grandfathered-in weapons and magazines that were manufactured before the law took effect, among others. A new version might be more effective.

Yet where we live, in Florida, Republican Attorney General Allison Moody has asked the State Supreme Court to block a ballot initiative to put an assault weapons ban before voters in 2020. This is despite the fact that the group Ban Assault Weapons Now (BAWN) has already gathered 99,000 certified signatures, which is enough to trigger an automatic legal review of the amendment by the state’s highest court. Claiming the definition of an assault weapon is too broad and the requirement that existing owners register their weapons within one year is misleading, what seems to really be the case is that Moody is another Florida NRA shill. This in a state that has seen some of the most horrendous mass shootings, including 49 dead and 53 injured at Pulse Nightclub in 2016 and 17 dead and another 17 wounded at Marjorie Stoneman Douglas High School in 2018.

So, what do we tell our kids? Certainly not to hope and pray—that has been a dismal failure. Ideally not how to harden themselves as targets—that’s a world none of us want to live in. I’m not sure I’ve got it all right, but I prefer to emphasize treating all people with dignity and respect, volunteering to collect signatures on petitions, calling members of Congress and the Attorney General’s Office, rallying peers to support events and efforts to raise awareness and educate people on the facts about gun-related crime and mass shootings, and getting people out to vote.

Floridians interested in helping get signatures for the assault weapons ban to be on the ballot can find more information at https://bawnfl.org/amendment.html

You can help fix this bloody problem no matter where you live. Please see organizations that work nationally, such as Moms Demand Action for Gun Sense in America, Guns Down America, Everytown for Gun Safety, the Coalition to Stop Gun Violence, Giffords Courage to Fight Gun Violence, and more.

(Laura Finley, Ph.D., teaches in the Barry University Department of Sociology & Criminology and is a CityWatch contributor syndicated by PeaceVoice.)