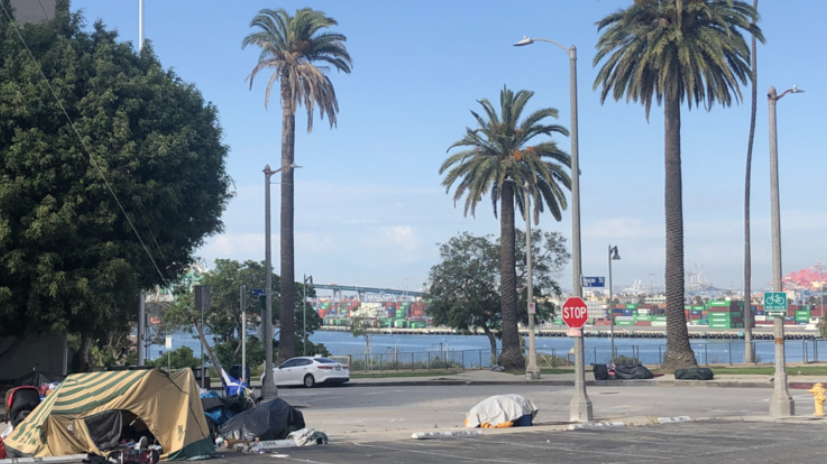 AT LENGTH-I’m not sure if any, except Harry Bridges, was ready for the battle over automation to arrive this soon. But it is here now, and Harry isn’t.

A bronze statue of the labor icon was dedicated at the new longshore Dispatch Hall in Wilmington on July 28. This bronze rendering has him pointing his finger to the future, but Bridges won’t be there to urge on the rank and file dockworkers or to argue the next contract with the employers.

Surely there were some who had an inkling. Harbor Commissioner Dave Arian, who passed away in January, and Port of Los Angeles executive director Gene Seroka probably did. But Arian is now with Bridges, and Seroka has just spent the last 20 years of goodwill currency on a single level-one permit for his corporate clients at Maersk. This decision has divided the port from this community — a situation reminiscent of the 100 Years War.

Wounds like these don’t heal for years, some for decades, as locals in the San Pedro Bay have long memories and short tempers. Hopefully, some of that will come out in the next city election with a change of leadership at City Hall and then the port. One thing is certain: the $100 million public access waterfront spending plan promised by Seroka and the reinvention of Ports O’ Call Village will carry new urgency and scrutiny — public trust is a currency spent wisely, but that bank account has been somewhat foolishly depleted with this act.

Nearly every day on my trip down to the historic San Pedro Post Office I am reminded of the disparity between the multi-billion-dollar industrial complex of the twin harbors and the despair of the homeless camped out on the sidewalk. I wonder if this new permit is a harbinger of things to come or just the legacy of the past decades of economic injustice that has piled up like the belongings of our unsheltered neighbors on the economic sidewalk of this town. My fear is that it could be both, as the city and the port seem helpless to coherently address the housing needs and the job losses — this while we are told the economy is booming and unemployment is at historic lows. But people here in sunny Southern California don’t like to listen to such fatalistic forecasts. There are two versions of the future that Harbor Commissioner Diane Middleton pointed out at the July 11 hearing, one that resembles Detroit after General Motors left; the other draws upon Seroka’s vision of doubling of imports and containers.

Each of these divergent predictions for the future of jobs on the waterfront could change everything, but they both can’t be true. And it will not just affect good paying longshore jobs but the entire supply chain of work from Los Angeles to Montreal, Canada. On the downside, this would mean a steep decline in the unionized blue-collar workforce that has been the bedrock of the harbor communities for decades. On the upside, could this create more high-tech and even better paying jobs? Can this be done without increased pollution of the air and water at our ports?

The APM Maersk Pier 400 pitted jobs against clean air technology and won this round. Maersk did a clever job of using this as a lever against the port, the city and the ILWU. This is a trick that we should never let happen again — good paying jobs and a clean environment must be co-equal to a sustainable economy and a healthy community. It doesn’t have to be an either-or decision, and yet there it was.

Now we are faced with the uncertainty that automation brings. This moment is beginning to feel like the 1980s when the shipyards and tuna canneries started closing. This moment is starting to feel familiar, like the immediate years after the Vincent Thomas Bridge was built, before old Beacon Street was torn down. Not all progress brings prosperity. It’s just that some in the San Pedro Chamber of Commerce or at Los Angeles City Hall didn’t consider these scenarios before taking the leap of faith into the new future.

What we are faced with here is being the doormat for the global economy while being the smallest voice in the city of Los Angeles. A voice that only occasionally rises up in protest, that often is not heard 25 miles down the 110 Freeway at the temple of power. And only once in a great while do we realize that solidarity within the community is the only way our voices and our visions of the people in the San Pedro Bay gets heard.

In San Pedro, we spend far too much time arguing over too little while the future overtakes us with brute force and technological momentum.