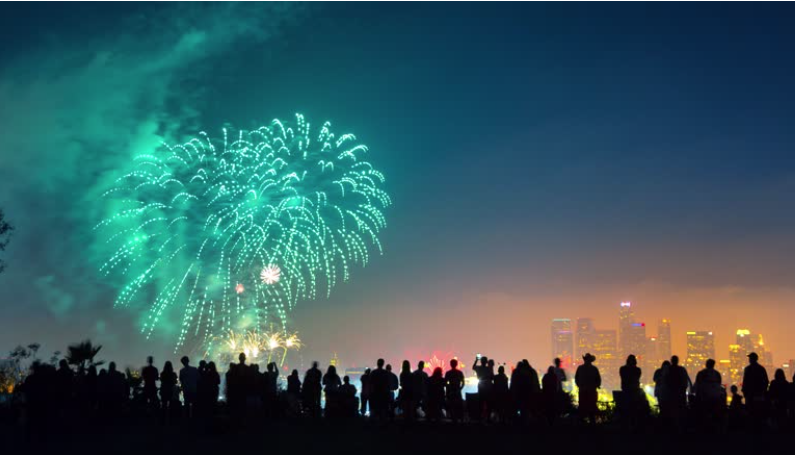 PUBLIC HEALTH-Each year, we are notified by our elected officials about the risks associated with “safe and sane” fireworks. We are asked to not use fireworks ourselves, but rather to attend fireworks events where our fire departments put their safety on the line to give us a firework show.

I want to begin by stating that I have always loved attending 4th of July events since I was a child when my parents would take me to see the parades and the fireworks. I also was lucky enough as a young teen in Rockford, Illinois to have as one of my best friends the daughter of the Rockford Park District’s Director. One year, I actually was able to go out on the Rockford Park District’s boat on the Rock River and watch as the Rockford Fire Department launched the fireworks. How cool is that?

After I was married and had children, my family used to attend the fireworks each year at Pierce College. I can remember in the 1980s seeing the smoke blowing towards us in the stands, but at that time, I did not realize the potential health hazards these smoke plumes could cause.

About a decade ago, I was a member of the West Hills Neighborhood Council. We had a booth at Warner Ranch Park in Woodland Hills which was very close to the garage where the fireworks were launched. The smoke plumes fell on us and I remember the odors. Since that time, I have stopped attending any fireworks events.

Here is the link to the LAFD shows for legal fireworks in the City of Los Angeles.

And this is the link to fireworks in Los Angeles County.

While I thank our firefighters for putting on these presentations for us, I have to say, go for the picnic, go for the music, but if you want to protect your family’s health, leave and go inside during the fireworks.

On the 4th of July, if you have them, turn on air cleaners in your home to reduce particulate matter in the air. Make sure to keep your windows and doors closed; and keep your pets inside.

This advisory is in effect through Friday morning. South Coast AQMD will issue an update if additional information becomes available.

Air quality is likely to reach unhealthful levels in areas throughout the South Coast Air Basin and in the Coachella Valley on July 4th through July 5th.  Fireworks are known to emit high levels of particulate matter (PM2.5 and PM10) as well as metal air pollutants, all of which can contribute to negative health effects. From the evening of Thursday, July 4th through the morning of Friday, July 5th, the Air Quality Index may reach the Very Unhealthy air quality category or higher, due to fireworks related to Independence Day celebrations. The use of personal "backyard" fireworks also contributes to this air pollution and can further increase how much air pollution a person is breathing.

Fine particulate matter levels on July 4th and July 5th are typically among the worst (highest) days of the year in the South Coast Air Basin.  The smoke and combustion products from fireworks add to the fine particles already present in the Basin that are primarily caused by motor vehicles, as well as fugitive dust and industrial emissions. 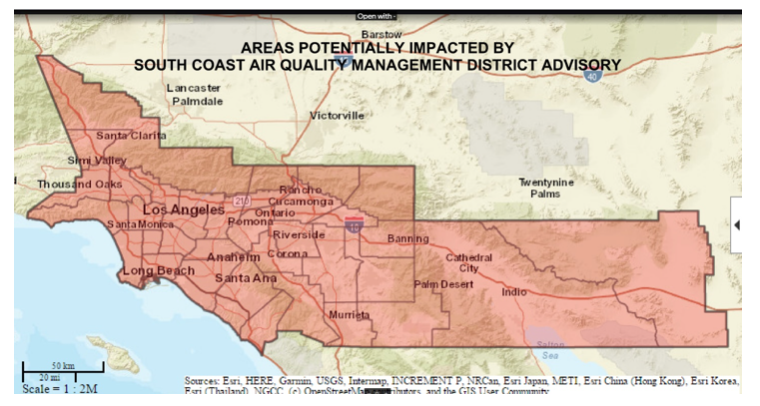 Areas of direct impacts and unhealthful air quality may include portions of:

To view current air quality conditions by region in an interactive map here.

What to Do When Air Pollution Reaches Unhealthful Levels:

Very Unhealthy:  AQI is 201 - 300.  Everyone may experience more serious health effects.  People wth heart or lung disease, older adults, and children should avoid all physical activity outdoors.  Everyone else should avoid prolonged or heavy exertion.”

According to the American Lung Association’s State of the Air 2019, os Angeles already has an F grade in air quality. Why is this so important? What is the impact of poor air quality on our health?

These are the public health risks according to that State of the Air Report for Los Angeles and what impacts air quality has:

For the past several years I have been contacting elected officials about the chemicals in fireworks and their potential risks to public health.

WHAT ARE THE CHEMICALS IN OUR FIREWORKS?

The above list was of the chemicals that give fireworks their colors. But what else is in fireworks?

“Environmental impacts of perchlorate with special reference to fireworks--a review.”

Perchlorates are one of the primary contaminates of concern in my community relative to potential groundwater contamination, and to complaints by local residents of benign thyroid disorders. So why are we releasing these chemicals where they can end up not only being breathed at these events, but may persist in the soils in our parks where they are launched, impacting our groundwater, or contaminating our water bodies including the oceans where they affect the smallest of organisms?

“SCAQMD Issues Particulate Advisory for Fireworks: This advisory is in effect Wednesday, July 4 through Thursday, July 5 Air quality is likely to reach unhealthful levels in areas throughout the South Coast Air Basin and in the Coachella Valley at times through July 5. Emissions from fireworks are expected to contribute to elevated levels of particulate matter (PM2.5 and PM10), which can reach the Unhealthy for Sensitive Groups air quality category, or higher, during and after the evening fireworks displays related to Independence Day celebrations. The firework emissions are expected to begin in the evening of Wednesday, July 4 with particulate levels expected to remain elevated through the morning of Thursday, July 5.

“The smoke and combustion products from fireworks add to the fine particles already present in the Basin that are primarily caused by motor vehicles, as well as fugitive dust and industrial emissions. Ozone concentrations are also expected to reach the Unhealthy for Sensitive Groups category or higher, in the afternoons and evenings through the holiday into the upcoming weekend in many inland areas. What to Do When Air Pollution Reaches Unhealthful Levels: Unhealthy for Sensitive Groups Air Quality Index (AQI) is 101 - 150. Although the general public is not likely to be affected at this AQI range, people with heart or lung disease, older adults and children are at a greater risk from exposure to air pollution. People with heart or lung disease, older adults, and children should reduce prolonged or heavy exertion. Unhealthy AQI is 151 - 200.

Where else is perchlorate an issue?

“We are what we eat: Regulatory gaps in the United States that put our health at risk.”

“The American diet has changed dramatically since 1958, when Congress gave the United States Food and Drug Administration (FDA) the authority to ensure the safety of chemicals in food. Since then, thousands of chemicals have entered the food system. Yet their long-term, chronic effects have been woefully understudied, their health risks inadequately assessed. The FDA has been sluggish in considering scientific knowledge about the impact of exposures—particularly at low levels and during susceptible developmental stages. The agency’s failure to adequately account for the risks of perchlorate—a well-characterized endocrine-disrupting chemical—to vulnerable populations is representative of systemic problems plaguing the regulation of chemicals in food. Today, we are faced with a regulatory system that, weakened by decades of limited resources, has fallen short of fully enforcing its mandates. The FDA’s inability to effectively manage the safety of hundreds of chemicals is putting our children’s health at risk.”

“The chemical perchlorate illustrates an expanding disconnect between the original intent of the 1958 food law as it relates to managing chronic health impacts of chemicals and the agency’s practice for allowing chemicals into the food supply. Because the chemical’s mode of action is well understood and undisputed—inhibition of the transport of iodine from the blood to the thyroid gland—it also makes for a compelling example. Perchlorate is a naturally occurring and man-made chemical that quickly dissolves in water and organic solvents and persists in the environment. It has been found in the urine of all Americans tested. While it leaves the body quickly, perchlorate persists in the environment for many years. The risks of chronic exposure to perchlorate are well described, as is the evidence of its widespread presence in the environment. The FDA has approved perchlorate’s use as a food contact substance twice. The first time was in 1963 for its use in sealing gaskets for food containers; and then, in 2005, it was approved for use as a conductivity enhancer or antistatic agent in dry food packaging.

“Perchlorate is perhaps most commonly known for its uses in rocket fuel, explosives, and fireworks and as a contaminant of nitrate-based Chilean fertilizer. Perchlorate enters the body through food and water, with food being the main contribution; perchlorate contaminates food through two primary uses: as an antistatic agent in any plastic material that contacts dry food, including final and bulk packaging, and as a contaminant of hypochlorite bleach, which oxidizes to form chlorate and then perchlorate with time and inadequate management. Bleach—a pesticide—is widely used to sanitize food surfaces in food-manufacturing and processing facilities; it is also a food additive approved by the FDA to wash and peel fruits and vegetables.

“Perchlorate primarily affects the normal functioning of the thyroid gland by inhibiting the transport of iodine from the blood into the organ. Iodine is an essential element needed to produce thyroid hormone—which plays an important role in controlling metabolism and is critical in regulating fetal and infant brain development. Because perchlorate is such a strong inhibitor of iodine transport, pregnant women, infants, and children with inadequate iodine consumption are the most vulnerable, and exposure to the chemical greatly increases the risk of impaired neurodevelopment.

“At least 20% of pregnant American women consume so little iodine that any exposure to perchlorate presents a significant risk of adverse neurological development in the fetus. Effects caused by lowering thyroid hormone levels during brain development are likely to be subtle and may be manifested as intellectual deficiencies and other chronic developmental delays. Emerging scientific evidence demonstrates that perchlorate exposure decreases thyroid hormone levels during pregnancy and that children born to mothers with borderline thyroid deficiency and who were exposed to perchlorate during the first trimester had decreased intelligence quotient (IQ).

“It is very likely that the FDA’s first approval of perchlorate use in contact with food more than 50 years ago was based on limited or no safety data. However, available scientific evidence on perchlorate targeting the thyroid gland and contemporary controversies about safe levels of perchlorate exposure from drinking water make its 2005 approval puzzling. Over the past decade, the evidence for the adverse neurological effects of low-level exposure to perchlorate has become stronger, yet the agency continues to stand behind its approval of perchlorate’s use in dry food packaging and food handling equipment.”

What should we be doing?

In conclusion, go to the park and enjoy the 4th of July this year. But if you are a sensitive receptor, view the fireworks at a distance. Or go home and watch fireworks on TV. But for next year, ask our Elected Officials to have laser shows instead of fireworks.

(Chris Rowe has been a 41-year resident of West Hills; she is a former West Hills Neighborhood Council Board Member where she was the Public Health Committee Chair; she has a B.S. in Health Education from CSUN). Edited for CityWatch by Linda Abrams.