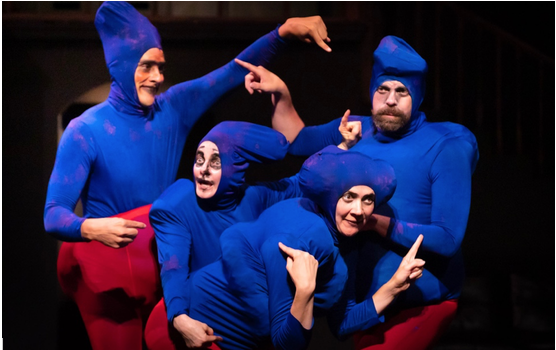 FESTIVAL WATCH--First, they claim their name is meaningless. Then they say it means “one thousand cranes. And one of them is always awake.”

They defy definition. One thing is certain -- this bouffon/clown troupe is the first to hit the boards at the Hollywood Fringe. Knowing nothing about clowning other than what I’ve observed on “Baskets,” I was utterly unprepared for the spectacle I would experience at the hands of these fascinating creatures portrayed by five self-described “miscreants” who led me and a roomful of fellow theater-goers on a journey that illuminates the human soul.

I was astounded, fascinated, horrified, and bedazzled for about an hour of music, dance, improvised comedy and physical theater. Afterward, I had a chance to speak with the group’s dauntless leader, Dean Evans. Dean has been very busy for some time getting world-wide acclaim as a performance artist, especially as a character called Honeybuns. Dean explained to me that four extremely talented folks had approached him with an itch to enlist him in leading them on a journey to develop a bouffon-style clown troupe. It was an offer he couldn’t refuse.

The groups’ style, which relies on the European bouffon form of the early 1960s in some ways, also draws inspiration from Native American clowning, particularly in regard to elements of satire and mockery. Dean described how Native people use clowning as a way to address problems in a fun way to break up the tension created by social problems within the community and to make space for dialogue and new approaches to these difficult issues. These clowns are also practiced at fomenting mob mentality, egging on the audience to get worked up on an issue and then once they do, pointing to the mob as if to say, “What the hell are you doing?”

I’m convinced it’s best to not say too much about the shenanigans that actually take place at the show. I understand it’s improvised anyway, so it will be different each time. I think I’m going to go again. The world of surprises revealed by Isaac Kessler, Jenson Titus Lavalee, Grayson Morris, Jeremy Sapp and Helen Udy are best left behind the curtain for you and I to discover at the MCadden Place Theatre at the Hollywood Fringe. You will be delighted. I guarantee.

NOT TO BE MISSED PERFORMANCES:

(Jennifer Caldwell is an actress and an active member of SAG-AFTRA, serving on several committees. She is a published author of short stories and news articles and is a featured contributor to CityWatch. Her column at www.RecessionCafe.wordpress.com is dishing up good deals, recipes and food for thought. Jennifer can be reached at [email protected].  Facebook: http://www.facebook.com/jennifercald - Twitter: @checkingthegate ... And her website: Jenniferhcaldwell.com) Photo courtesy of Mil Grus.  Prepped for CityWatch by Linda Abrams.