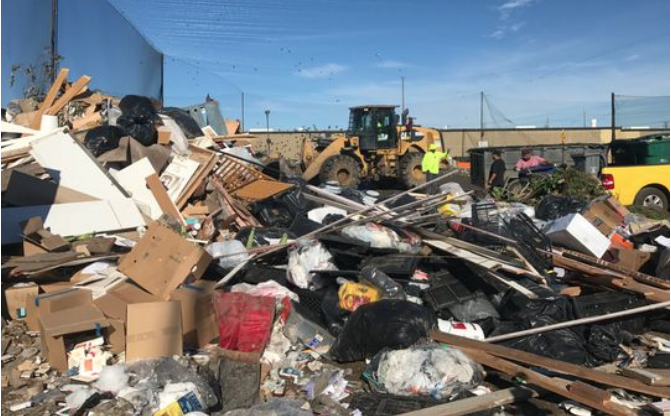 ONE MAN’S OPINION -It seems that it takes something like the plague pressing at our doors before we we’ll ever wake up to what’s happening to us.

When rats are running amuck in the streets and inside City Hall and the police are getting MRSA and Typhoid Fever, even tabloid rags like “Pravda West” (LA Times) have to mention the story and the champions of destroying poor people’s homes -- like KNBC Channel 4 -- have to let at least one of its reporters, in this case, Joel Grover, begin to address the issue. Imagine what Joel could tell us if Big Media would let him.

Despite years of warnings, Angelenos have closed their eyes to the obvious. The massive, never ending corruption at City Hall is destroying Los Angeles as a viable city. What did people think would happen when Garcetti’s Manhattanization Mania tore down the homes of more than 60,000 poor people? Would they move to Beverly Hills and eat cake?

Mass Transit is the Problem Not the Solution

Subways and fixed rail lines are not a solution; they make everything worse. Like garbage on the streets attracts rats, subways and fixed rail attract mixed use projects and people who bring their cars with them. Each mass transit project is used to justify more density – but density begets more deterioration.

People avoid subways and fixed rail whenever they can which means that Los Angeles is facing annual multiple billions in transit deficits for maintenance and operating costs in addition to construction. These systems last 30 years and that means LA must start spending to re-new its older subways beginning in one year. We have piled up hundreds of billions in debt which means Wall Street is sucking us dry. All these problems would have been avoided if LA had not densified in the Basin.

The rejection of Measure EE was one Wall Street scam which we averted. Finally, people are catching on – when Garcetti and other Wall Street gargoyles like LAUSD Superintendent Austin Beutner want to increase taxes, it is not to benefit us. The money was for Wall Street. Their plan is to do with the schools what Wall Street did with mortgages – bundle and securitize education (Charter schools).

The 1%’s Media Elite Will Counterattack

Pravda West and the other media are making their counterattack against honest reporting. They never cover the relationship between destruction of the rent-controlled homes of 60,000 poor people and the host of social ills that follow. They never report how the fraudulent hyping of home values raises the cost of apartments, which also drives people into the streets. They are silent about the role money laundering plays in the destruction of rent-controlled units.

They never count the number of empty new fancy schmancy apartments and compare them to the number of homeless. For years, muckrakers have been pointing out that there are enough empty units in the city for all the homeless, but the LA media covers up the fact that people are dying in the streets outside new projects with empty units.

Finally, Zev Yaroslavsky, in discussing SB 50 with Adrienne Alpert on Channel 7, admitted that pricing residential property at Developer Value artificially raises housing prices. For years, we have been pointing out that fact: when a corrupt city council unanimously approves each zoning violation, developers know that they can buy what and where they wish. This means housing is not worth its Living Space value. Rather, all residential property is worth what the developer can bribe his councilmember to allow. The next homeowner who sells his R-1 home then wants a high developer price for his house. Soon the comparables for homes escalate far beyond reason for Living Space. Few families can afford to pay Developer Value which can be $500,000 to $1.5 million higher than Living Space value.

Who Benefits from Pricing Homes at Developer Value?

Wall Street and the politicos who get secret kickbacks are the ones who benefit. When a home north of Franklin sells for more than $500,000 above its Living Space value, the family must take out an extra $500,000 mortgage and pay Wall Street. Then the County re-appraises the property at its Developer Value, so property taxes are higher and city’s revenues increase, but Garcetti has no money to stop piles of garbage and dung and biblical era diseases.

Nothing Will Improve, Except the Propaganda

Pravda West, Channel 4's Conan Nolan, and the rest of the media will spin, spin, spin until the public is dizzy with all the fake BS and retire to watch another episode of Bachelorette, forgetting that the rats are following the homeless encampments along the freeways. Beware Bel Air, the bell tolls for thee.

When Judges Shill for the $8 Billion Vermont Subway, No One Is Safe

While Garcetti cannot find any money to combat rats, he proposes deceiving the public into spending another $8 billion to construct a fixed rail line down Vermont Ave in addition to the $310 million Busway. As reported before, Judge Doofus Beckloff sees no reason for Los Angeles to even study Telecommuting and the gazillion advances that have occurred since the city’s 1993 Study. Let’s be clear – Garcetti, Fruin, Beckloff, Wesson, Beutner, etc. are as anti-science as Trumpy-Dumpy. They specialize in “fictions over facts” just as the GOP believes in Noah’s Ark.

Will Joel Grover, Zahniser and Reyes be allowed to report? Inquiring minds want to know.