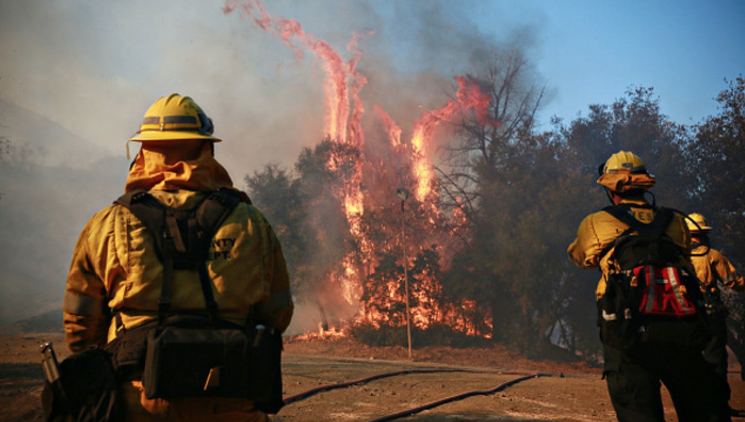 ENVIRONMENT POLITICS--There has been a lot of alarm in the areas impacted by the Woolsey Fire about the risk of exposure to radiation.

Because of news media articles and social media posts, local residents were led to believe that radiation was being released from the Santa Susana Field Laboratory (SSFL) site that may pose a health risk to our community. Preliminary reports by various agencies have not confirmed any radiation releases above normal background radiation from the SSFL site. The lead agency for the SSFL cleanup, the California Department of Toxic Substances Control (DTSC), has been provided with onsite monitoring data from the air monitoring stations around the SSFL site. It is not clear when a final report will be released regarding offsite risks to neighboring communities from the fire that burned a large part of the SSFL site. 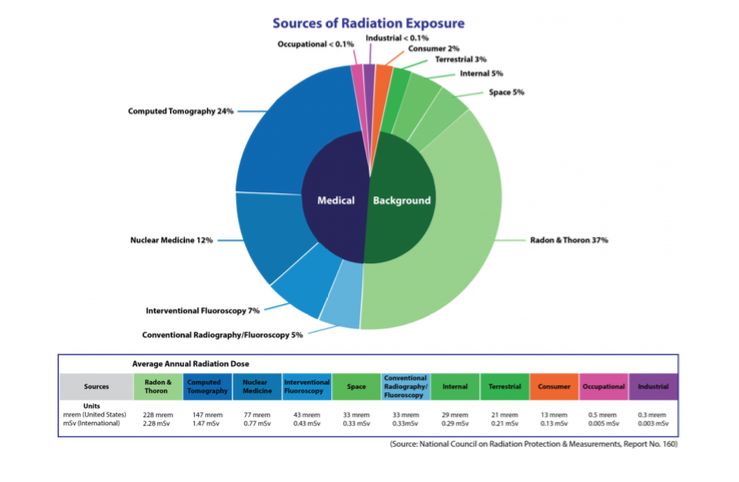 Source of chart above: Radiation Sources and Doses

What many people may not be aware of is that the SSFL site also burned in 2005. The Federal EPA did a radiological survey since that time. They were requested to determine “Background” for the SSFL site for radionuclides that would be “Naturally Occurring Radioactive Materials” (NORM) radionuclides and fallout radionuclides.

“Naturally Occurring Radioactive Material (NORM) is defined as, “Materials which may contain any of the primordial radionuclides or radioactive elements as they occur in nature, such as radium, uranium, thorium, potassium, and their radioactive decay products, such as radium and radon, that are undisturbed as a result of human activities."

It is important to focus on what percentages of our everyday life are impacted by “NORM” radionuclides because many people are not aware of the naturally occurring uranium, radium, and radon that are found locally.

“Most of our average annual dose comes from natural background radiation sources:

Another 48 percent of the average American’s dose comes from medical procedures. This total does not include the dose from radiation therapy used in the treatment of cancer, which is typically many times larger.”

What is the risk from radon?

“Radon is the number one cause of lung cancer among non-smokers, according to EPA estimates. Overall, radon is the second leading cause of lung cancer. Radon is responsible for about 21,000 lung cancer deaths every year. About 2,900 of these deaths occur among people who have never smoked. On January 13, 2005, Dr. Richard H. Carmona, the U.S. Surgeon General, issued a national health advisory on radon.”

Where can we find our risk of radon in the Los Angeles area? Below are two areas potentially impacted by the Woolsey Fire.

This is a link to an interactive radon map for California. Clicking on the highlighted area of the map on the interactive map would show these levels:

Description: 20 percent or more of home indoor-radon measurements are likely to exceed the U.S. EPA recommended action level of 4 picocuries per liter.”

Clicking on the interactive tool for this highlighted area would show:

Why is this so important?

“Exposure to radionuclides in smoke from vegetation fires:”

The estimated absorbed radiation dose to an adult member of the public or a firefighter exposed for 24 h to inhalation of smoke near forest fires could exceed 5 μSv per day, i.e, more than 2000 times above the radiation dose from background radioactivity in surface air, and also higher than the radiation dose from (210)Po inhalation in a chronic cigarette smoker. It is concluded that prolonged exposure to smoke allows for enhanced inhalation of radionuclides associated with smoke particles. Due to high radiotoxicity of alpha emitting radionuclides, and in particular of (210)Po, the protection of respiratory tract of fire fighters is strongly recommended.”

“In the United States, I consider radon exposure the leading environmental cause of cancer mortality,” says longtime radon researcher and University of Iowa professor Bill Field, who was not involved with the research but has collaborated in the past with senior author Daniel Krewski of the University of Ottawa. The new paper represents one of the first global estimates of lung cancer risk attributable to radon exposure, Field says. It was made possible by a growing body of data on residential radon levels worldwide.”

“The findings of this large, prospective study suggest residential radon may be a risk factor for lymphoid malignancies among women. Further study is needed to confirm these findings.”

·      “Incidence rates of chronic lymphocytic leukemia in US states are associated with residential radon levels”:

“Results: Incidence rates for CLL were significantly correlated with residential radon levels among whites (both genders together and each gender separately; p < 0.005) and among blacks (p < 0.05). Conclusion: We speculate that radon increases CLL risk and that the mechanisms may be similar to those by which radon causes lung cancer.”

“The link between lung cancer and radon gas is well established, but recent research suggests that radon in drinking water or in the air may contribute to a higher rate of childhood leukemia.”

·      “Temporal and geospatial trends of pediatric cancer incidence in Nebraska over a 24-year period”:

“Of note, Nebraska is also a state with high levels of radon. There is a statewide program for testing for the levels of radon in homes. Notably, of the 24 counties with higher levels of CNS tumors (labeled red on the map), 18 report more than 50% of the homes having radon levels above 4.0 pCi/L.”

“Combating Cancer Through Public Health Practice in the United States: An In-Depth Look at the National Comprehensive Cancer Control Program

Radon is the second leading cause of lung cancer, and the leading cause of lung cancer among non-smokers. Many NCCCP participants are increasingly incorporating activities to reduce exposure to radon, a radioactive gas ubiquitously present in the lower levels of U.S. homes and buildings. A 2010 review of cancer plans identified radon-related activities in 27 (42%) plans. An updated review in 2017, showed that the number of NCCCP participants addressing radon had increased; nearly two-thirds of all NCCCP cancer plans contained radon-related strategies. Specific examples of radon activities implemented included increasing education, promoting radon testing and remediation of houses, partnering with other national agencies that address radon, and promoting adherence to existing local statewide radon policies. Iowa has the highest average radon concentrations in the U.S.; the Iowa Cancer Consortium led a collaboration to increase levels of awareness, testing, and (if necessary) mitigation, and to introduce a comprehensive radon control policy in Iowa by engaging partners and stakeholders across the states. Following their multi-pronged intervention, the number of radon tests increased by 20%, and the number of mitigations completed by certified mitigators increased by 108%.”

“Reducing the Risk from Radon: Information and Interventions A Guide for Health Care Providers”:

The primary method to reduce radon in a home is installing a vent pipe system and fan that pulls radon from beneath the building and vents it to the outside. This system, known as an active soil depressurization system, does not require major changes to a home. Radon reduction systems can be installed in homes with or without basements, as well as in homes with crawlspaces. Methods to reduce radon in homes are discussed in EPA’s Consumer’s Guide to Radon Reduction - see links at www.epa.gov/radon.

The cost of reducing radon in a home depends on how the home was built and the extent of the radon problem. The vast majority of homes can be fixed for about the same cost as other common home repairs. In addition, radon reduction costs often are an eligible expense covered under a health flexible spending arrangement (FSA). The majority of states maintain names of certified radon contractors within their state. However, if contractors are not licensed by the particular state, your patients can contact private radon proficiency programs for lists of certified radon professionals in their area. For more information on private radon proficiency programs – see links at www.epa.gov/radon. Selecting someone to fix a radon problem is much like choosing a contractor for other home repairs—your patients may want to get references and more than one estimate. In addition, new homes can be built to resist radon entry. The additional cost at the time of construction is minimal. When installed properly, the basic radon-resistant new construction techniques greatly reduce the lung cancer risk that may occur from radon in the home.”

“A Citizen's Guide to Radon: The Guide to Protecting Yourself and Your Family from Radon”

(Chris Rowe has been a 41-year resident of West Hills, was a former West Hills Neighborhood Council Board Member, and has a B.S. in health education. She can be reached at [email protected].)  Prepped for CityWatch by Linda Abrams.