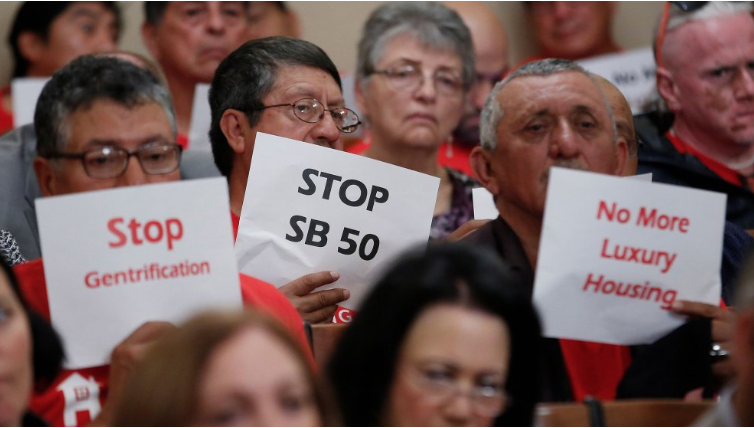 ALPERN AT LARGE—Only in California could something as awful as SB 50 have had a chance of becoming reality.

Only in Stupidville could the idea of single-family homes becoming an endangered species even have a glimmer of discussion.

Only in the State of Confusion could turning the California coast into one big high-rise even merit a moment of consideration.

And only in a state now used to backdoor deals could this bill, along with a slew of others, have gotten this far because our elected, "anti-Trump, pro-transparency" leaders presumed we'd all be distracted by the fall mid-term elections.

Of course, it makes sense when you realize that California political leaders, particularly those representing the "leadership" of the Democratic Party in this state, despise the middle class, and are beholden water carriers for thuggish construction firms and dogmatic leftists.

And it's highly doubtful the average California Democrat believes in them! There's a reason why Mayor Eric Garcetti is so disliked in Los Angeles, and it's safe to say that Governor Newsom was voted in by default rather than due to any grassroots support of him.

Because both Garcetti and Newsom were (and to a large degree are) supporters of SB 50, or something very much like it, and are only hedging their bets and their statements because the public is increasingly becoming aware of it...

But back to the Wiener Wonder, who did a great "duck and cover" in Santa Monica last week when he thought he'd he be surrounded by "woke" supporters of his "transit-oriented, affordable housing" efforts but instead were surrounded by community activists (probably all Democrats) who actually do these efforts but aren't in the pocket of developers.

He ran out of the room before the Q/A session could begin, and he knew that this was NOT a dark room where these sneaky deals were made for SB 50 (which, by the way, pretty much ends the ability of single-family homes and neighborhoods to remain intact, while eliminating local/city control of zoning and their own affordable/transit-oriented efforts).

Instead, he saw and heard sunlight, and a whole lotta liberal Democrats (but the ones with integrity and an understanding of environmental science and the laws of physics) ready to tear him a new one for secretly, sneakily working with other creepy Sacramento pols to turn our state into an overdeveloped sewer.

1) Thanks to Ben Allen, Paul Koretz, and others for fighting against this SB 50. Contact your local assembly member or state senator to STOP this.

2) A "have you no shame" call out to Autumn Burke, who clearly has opted for political suicide by attaching herself to this immoral, decrepit effort...was the money worth it, Ms. Burke?

3) Why the hell isn't Mayor Garcetti moving forward with the L.A. City Council motion opposing SB 50, and fighting it tooth and nail like San Francisco and other major cities are?

This is crazy and may be decided by the time you read this article. But this fight, and the questions over how on earth this could have gotten this far, is ANYTHING BUT OVER.