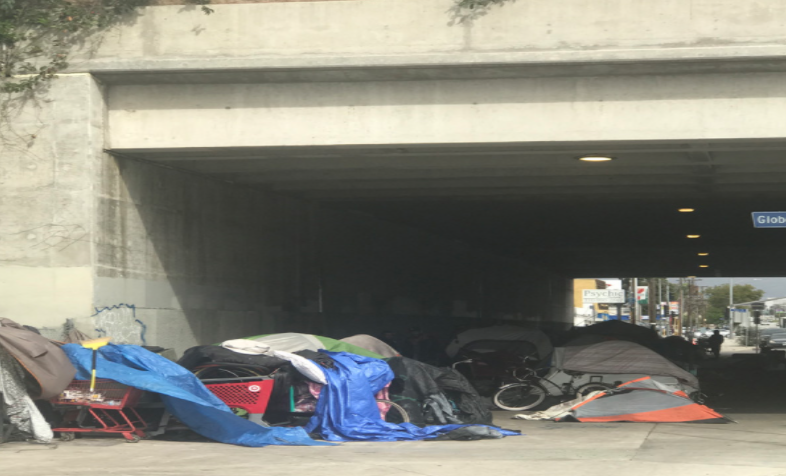 ALPERN AT LARGE--Last night, a group of ethnically, politically, and socioeconomically diverse individuals discussed briefly what to do with the segment of the northern side of the 405 freeway along Venice Blvd.

A motion was placed to support a Metro Bike Share station/rack to serve a better land use than what we currently have, which is a tent/homeless encampment.

A very stark contrast exists between the northern side of Venice Blvd, between Globe and Tuller, and under the 405 freeway. The southern side of Venice Blvd., which is in Culver City, a city that respects its citizens, public safety, and the rule of law, is open for pedestrian use. The northern side, however, is in Los Angeles, and is clustered with homeless and is unnavigable.

They've nowhere to go! They all want and can't get help! They're all victims!

Well, interestingly enough, the group of diverse individuals who met last night (it was the MVCC Transportation/Infrastructure Committee) had the same conclusions that the MVCC Board of Directors had last year at a special Friday night meeting where an amazing consensus was noted:

1) The homeless are NOT all the same. There are three groups, overall--one who are financially down on their luck, one who has psychiatric and substance abuse problems, and one who are quite content with a low-responsibility, low-cost standard of living.

2) The first two groups need and want help (at least those who are psychiatrically stable), and with help they can and will leave the realm of homelessness. Affordable housing is a horrible burden and making their lives worse.

3) The last group, approximately one-third, do NOT want help. They are FINE. The weather is nice, and some have been booted out of the Midwest or Northeast, and there are services here for them to receive with little to no payment or responsibilities required. This group often is the one most responsible for local theft and public urination and defecation in neighbors' yards.

So long as our Mayor, City Council, and City Attorney continue a feckless, fund-seeking, and otherwise-irresponsible approach to the homeless problem, the problem will persist and be milked for more taxpayer funds, and at the sufferance of the taxpaying citizens of Los Angeles.

Venice Blvd., with the southern Culver City side being clean and appropriate for public use, while the northern Los Angeles side is unsafe (the homeless are now encamping upon the median), is evidence enough, and proof positive, that cities can obey the rule of law.

Or they can flaunt the rule of law and risk a public health and safety/security disaster that will inevitably occur sooner or later.

Angelenos and LA County residents have taxed themselves to take care of this worsening problem, but the City of LA has no proper policies or strategies to fix the problem. Arguably, the City's leaders appear to want the problems to persist long enough to seek more local, state, or federal funds.

Either way, the City of Los Angeles is AWOL and "homeless" in their homeless policies. The result, of course, is that all parties suffer. Enabling bad behavior is NOT helping ANYONE.

We made a choice last night--to reject the Metro Bike Share idea as insufficient comprehensive and potentially unsafe for bicyclists.

Angelenos have a choice to make as well--to demand leaders who will know when to help the homeless, and when to utilize law enforcement and public health/safety resources in a responsible, adult, and civilized manner.

Our current Los Angeles Mayor, City Council, and City Attorney have all chosen not to do that. Culver City has.

There ARE answers. We just have to be mature and courageous enough to utilize those answers.