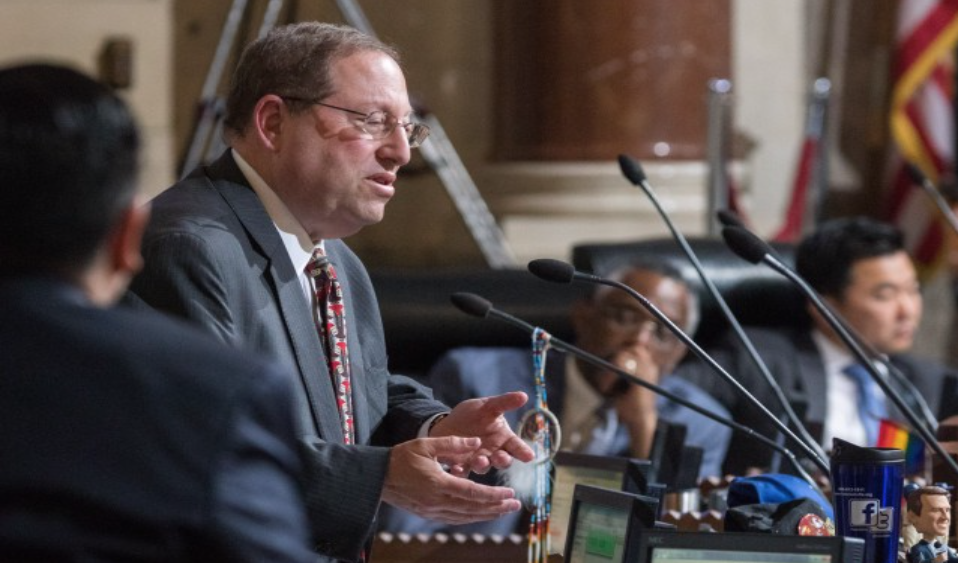 ALPERN AT LARGE--Credit should go to where credit is due, and Councilmember Paul Koretz (CD5, West LA east of the 405 freeway and the adjacent San Fernando Valley) did something that too many in our City have failed to do: defend the ability of our City to best decide how to create more appropriate and affordable housing for its residents.

In short, Councilmember Koretz introduced a resolution of formal opposition to California State Senate Bill 50 (Wiener) that would, in short, allow Sacramento to completely shred every bit of local control that cities and counties have to best zone, densify, and preserve neighborhoods where they currently are performing their own Planning efforts.

Imagine if President Trump decided and legislated how each state of our nation was going to zone, build, and densify...and then you get why SB 50 (and Wiener and his developer cronies) is such a horrible threat to the cities and counties of California.

Most reading this have probably never heard of SB 50, and they probably have never heard of SB 827 which was killed last year after Wiener and the overdevelopment lobbies tried to hijack local control of city and other local efforts to direct growth--and prevent overgrowth--in their cities and encourage middle-class, affordable housing.

The issue again needs to be raised that Wiener (who is in bed with Governor Newsom and a lot of other uber-developers who ultimately don't give a DAMN about middle-class, affordable housing) and his enablers think that the unaffordable, traffic-choked, and feces-contaminated San Francisco is a WONDERFUL example for the rest of the California coast:

1) Think one big "Shanghai" from San Francisco to San Diego, and then you have an idea of what these "urban visionaries" want for us all ... because we're too stupid, selfish, and uneducated to know what's best for us and our families.

2) Think of how much current overdevelopment (not by-right, lawful and environmentally-acceptable development) is helping the middle-class and affordable housing, and then you realize that developers and overdevelopers are two different groups of people...the former can be reasonable while the latter are enabled by Fools, Tools, and Ghouls (more on that in a moment).

3) Think of how the Pico/Sepulveda overdevelopment (Casden), being built entirely out of character with that local region of West Los Angeles, and which was slammed through by former Mayor Villaraigosa (who, like Mayor Garcetti, claimed he wanted "elegant densification" but really just wanted developer campaign dollars) because of "overriding considerations"...

...despite indisputable and even dangerous traffic, mobility, and environmental impacts (including breathing car/freeway fumes), and without ANY reasonable transit amenities, and then you realize that there are who SAY they want transit-oriented development but are LYING. And THAT is what Wiener and his legislator/lobbyist bully-boys want for all of us.

It bears repeating (I've raised this in previous articles) that there are Fools, Tools, and Ghouls enabling Wiener (who really is an arrogant, "smarter than you" kind of guy) and all those who either unwittingly (or worse yet, knowingly) want to turn the California Coast into one big, unlivable, hellish Shanghai:

2) The Tools are those who presume that more transit and more development will be done right, but their political leaders betray them, and then they realize too late they were used as "Useful Idiots". For example, I don't regret pushing for the Expo Line, but I resent being used as a "Useful Idiot" with respect to Villaraigosa and the aforementioned Casden development.

3) The Ghouls are those who know damned well what's at stake and are willing to do it anyway because they're rich and powerful … and want to be more rich and more powerful ... and THAT'S who is behind Scott Wiener and the SB 50 lobbies. They do NOT want what's in ANYONE'S best interests save their own monied power grabs.

So, thanks again to Councilmember Paul Koretz for standing up to what is virtually a gutting of what makes a City a City--its own zoning, planning, transportation, security, open space, and other local jurisprudence.

If we want to build, then we should build!

But ignoring the 15% or more of our housing being gobbled up by foreign entities and driving up the cost of housing or ignoring the efforts my own neighborhood council (the Mar Vista Community Council) to require larger developments to build 50% or more truly-affordable housing for variances, shows that those saying they want affordable housing too often are just lying.

It's to be hoped that the ability of the City of Los Angeles to retain its independence from Sacramento in knowing what's best for its residents will be enjoined not only by Councilmember Koretz but the rest of the City Council and Downtown.

Or at least by those not already under investigation by the FBI and Department of Justice for "pay to play" schemes with developers who would love nothing more than to see SB 50 pass.