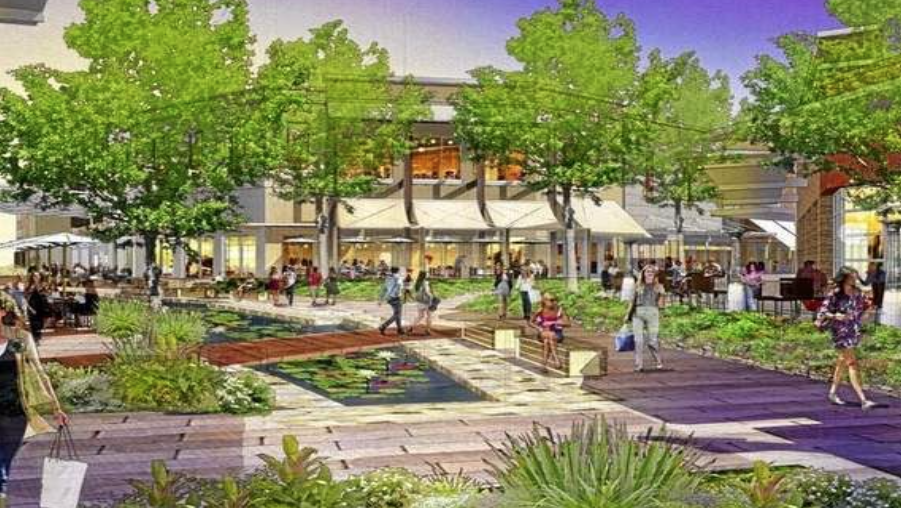 OVER-DEVELOPMENT ON THE WAY-Developers got an awesome gift on Christmas Day 2013 when the Warner Center 2035 Specific Plan went into effect.

Five years on, though, this developers’ bonanza is a bust for middle- to low-income workers and residents in the southwest San Fernando Valley. In the midst of LA’s twinned crises of homelessness and a lack of affordable housing, the Warner Center 2035 Specific Plan aims to graft a dense, skyrise-filled, luxury enclave onto Woodland Hills, a suburb distinguished by excessive heat and a congested stretch of US-101, as well as residents who love to shop at Costco.

Passed as an ordinance by the LA City Council, the Warner Center 2035 Specific Plan guides land use and redevelopment of the 1.5-square-mile Warner Center neighborhood of Woodland Hills. The plan jettisons density restrictions and height limits, encouraging high-rise construction and shared parking, while granting streamlined entitlements and processing of applicants’ projects. The resulting building boom shows no signs of slowing, attracting developers and investors from throughout the state and from places as far away as Texas, Florida, China, and France.

With 10 large projects underway and many more approved or proposed, the specific plan began a five-year review by the LA Department of City Planning (LADCP) in December. The time for concerned area residents to urge changes to the plan is now. The LADCP is accepting written comments, and a meeting before the City Planning Commission will take place later in February or March, according to statements made by city planning officials at the only open-house-style public meeting on the plan’s five-year review, hosted by LADCP on January 30 in Van Nuys. The department is required to submit a status report to the city within 90 days of the plan’s five-year anniversary.

The specific plan created eight subdistricts in Warner Center that are unrelated to how longtime locals think of the place: Topanga, River, Uptown, North Village, College, Commerce, Park, and Downtown. The plan allows 19,000 new residential units to be built in addition to Warner Center’s 2008 baseline of 6,200, an extreme density for a community with such hot summers, inadequate public transit, and little open space.

Twenty-eight significant projects have been filed so far under the specific plan, 15 of which have been approved. All but three of the 28 projects have a residential component, with no affordable units proposed. The 13 projects filed with the city but not yet approved offer 6,089 market-rate or luxury residential units, almost all of them rentals. Eighteen of the 28 projects mix residential units with office, commercial, retail, and/or entertainment uses. (For more details about the significant projects filed under the specific plan, see “Selected Warner Center Projects” below.)

And although the specific plan intended to create a district where people would live so close to work they could ride a bike or walk there, the rollout of the plan is lopsided: No new major employer has yet committed to relocating to the district. Whether current Warner Center office workers who commute in decide to move there remains to be seen.

Of the 1,998 market-rate units under construction in Warner Center, 379 are nearly complete at Fairfield Residential’s Vela on OX in the College subdistrict. A studio apartment in this luxury development starts at $2,130 a month. Using the federal definition of housing affordability, i.e., rent costs no more than 30% of a household’s annual gross income, a household must earn $85,200 a year to afford that tony studio, hardly a reasonable expectation for the 22,000 students attending LA Pierce College less than one mile away.

Recognizing the need for affordable housing in Warner Center, LA City Councilmember Bob Blumenfield (CD 3) passed a motion in May to study the feasibility of including an affordable-housing requirement in the specific plan moving forward. The process to craft this policy is ongoing.

In response to the councilmember’s motion, the Woodland Hills Impacts and Policies (WHIP) Committee of the Woodland Hills–Warner Center Neighborhood Council (WHWCNC) submitted a set of options last fall. Two recommendations, if pursued by the city, spell trouble for low- to moderate-income renters, including those who have lived in Warner Center for years. One is that there be no mandate for affordable housing in Warner Center, and the other is that the scant existing affordable housing be torn down to make way for denser affordable complexes. The chair of the WHIP Committee, August Steurer, and a WHIP Committee member, Sean McCarthy, also served on the Warner Center Community Advisory Committee, one of the bodies that helped forge the specific plan.

Four of the not-yet-approved projects are mega-developments. These projects are Unibail-Rodamco-Westfield’s (U-R-W) redevelopment of the 34-acre Promenade Mall property; Adler Realty Investments’ redevelopment of a 24-acre corporate office park on the corner of Burbank and De Soto; Sandstone Properties’ proposed 25- and 27-story luxury residential towers on Canoga; and Spieker Realty Investments’ 17.6-acre proposed mixed-use development for seniors at Canoga and Burbank.

A fifth mega-project to be determined, on the former Rocketdyne property adjacent to Westfield Topanga’s parking structure, has to wait until ongoing remediation of an underground toxic plume is complete. Sixty years of aerospace research and manufacturing on the 47-acre property left tetrachloroethene, total petroleum hydrocarbons, and trichloroethylene in the soil, soil vapor, and groundwater. The Los Angeles Regional Water Quality Control Board (LARWQCB) tracks the progress of the remediation efforts.

Triple Five Group, the Edmonton, Canada–based owner of the largest malls in North America, the Edmonton Mall and Mall of America, is purchasing the property from United Technologies Corporation, according to statements made by public officials. As an indication of its commitment and connections, Triple Five already has a representative on the advisory board to the recently re-activated Warner Center Transportation Management Organization.

The Rocketdyne site is in the Uptown subdistrict, where industrial, commercial, residential, and retail uses are all meant to take place “around a central park.” The property has the potential for a 6.035-million-square-foot development, or the equivalent of almost four Westfield Topanga malls (see uptownatwarnercenter.com). At a recent general meeting of the Woodland Hills Homeowners Organization, City Councilmember Blumenfield said that Triple Five Group awaited “environmental clearances” before submitting development plans to the city.

The Warner Center 2035 Specific Plan has a number of deficiencies, including no mandates for affordable housing, a new police station, or publicly owned parks, schools, or libraries. It also has no requirement to hire local workers in the construction trades. Area workers and residents are waking up to the plan’s flaws.

One group, in particular, has attended several neighborhood council board meetings and showed up in force at the LADCP’s open house on January 30. Union workers from Local 661 of the Southwest Regional Council of Carpenters demand that Warner Center developers pay prevailing wages to construction workers. They also want the city to add a community workforce agreement to the specific plan, which would require developers to hire local workers.

Jason Green, 36, a carpenter with Local 661, said he and several colleagues had visited construction sites in Warner Center and discovered that workers were paid an unlivable wage of $16.75 an hour and were traveling long distances to job sites. (This has not been independently confirmed.) The prevailing wage for a journeyman carpenter is $42.41 an hour.

“You know, I don’t know how that’s gonna help people … in Woodland Hills, getting paid $16.75,” Green said. “The carpenters feel it doesn’t matter if you’re union, nonunion. You deserve a livable wage when you’re building with your hands.” He spoke of the pride of building in the community where he lives.

Proponents of the specific plan tout its necessity for Millennials. But Millennials are having a hard time moving up the economic ladder: more households headed by Millennials (ages 18 to 35 in 2016) exist in poverty than any other living generation, according to reports from the Pew Research Center’s Richard Fry. Millennials are moving less frequently than prior generations, too, and as a group, they suffer from lack of good job opportunities since the Great Recession and may be saddled with loads of student debt. Four-fifths of those under age 35 who buy homes prefer “single-family detached houses,” reported Chapman University demographer Joel Kotkin in 2017.

Who, then, will benefit from the development boom in Warner Center? Apartments are increasingly unaffordable. The average rent of market-rate units skyrocketed 33% from 2013 to 2018, according to a June report in Curbed LA, and was several hundred dollars higher than the citywide average last spring.

It’s hard to believe that the building frenzy will benefit residents over the long term. The developers, though, will be killing it.

This list of significant and major projects in Warner Center includes those under construction, proposed, or approved. When information was available, the geographic location of the developer is provided in parentheses or included in the project’s description.

Proposed Mega-Projects Not Yet Approved

Promenade 2035 Project, 6100 N. Topanga Canyon Blvd., a mixed-use redevelopment of the 34-acre Promenade Mall property, U-R-W, 23 buildings ranging from one to 28 stories plus a 15,000-seat entertainment and sports stadium. U-R-W, based in Paris, was formed in 2018 when commercial-retail developer Unibail-Rodamco purchased the Australian company Westfield and retained the brand, according to the company website.

Proposed are 1,432 luxury apartments, 244,000 square feet of retail space, 629,000 square feet of office space, two hotels with 572 guest rooms, and a 15,000-seat roofless stadium, according to the executive summary of the draft Supplemental Environmental Impact Report (SEIR). Among the 23 buildings are seven towers: two high-rises with 28 floors; one with 19; two with 18 plus roof decks; and two with 15, according to a plot plan from Westfield.

Phased construction over 13 to 15 years will move in a counterclockwise order from the northeast corner around to the southeast corner of the site. The LADCP is working on its response to the many comments submitted as part of the public comment period on the draft SEIR. The final EIR will likely be issued in the spring.

Mega-Project to Be Determined

6633 Canoga Ave., 47 acres, the former Rocketdyne site. The specific plan encourages thousands of residential units in a mixed-use development that could include commercial, industrial, and retail buildings. The sale of the property to Triple Five Group is almost complete. Ongoing remediation of the toxic plume under the site is being monitored by the LARWQCB.

Vela on OX, 21221 Oxnard Street, Fairfield Residential (San Diego), 379 luxury apartments, including live/work units, 5 stories. This project is near completion. The developer also has entitlement for a 71,000-square-foot office tower to be built at a later date.

22055–22121 Clarendon Street, AMCAL Equities (Texas), 335 market-rate apartments, 5 stories. On the site of the old Woodland Hills Post Office, it is adjacent to Warner Center and a few hundred feet from Topanga Canyon Blvd.

Proposed Large Projects, Not Yet Approved

Where to Voice Your Opinions

Note: A shorter version of this article, along with the list of developments, was published on February 10 at messengermountainnews.com.

(Gina K. Thornburg, PhD, is a geographer, writer, editor, and community activist based in Woodland Hills. She serves as the at-large alternate on the WHWCNC board. Any views expressed in this article are hers and do not reflect the opinions of anyone else on the board.) Prepped for CityWatch by Linda Abrams.