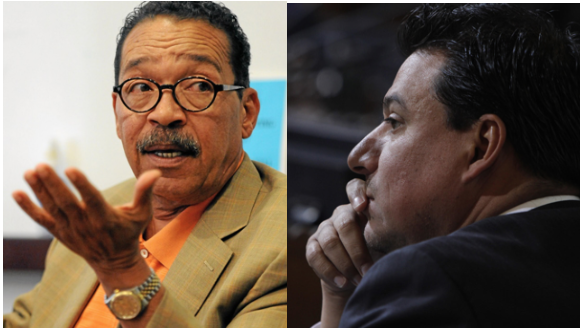 @THE GUSS REPORT-Did disgraced Los Angeles City Councilmember Jose Huizar tip his hand on one way that alleged land development corruption may work between himself, City Council president Herb Wesson and those seeking to buy their favor with campaign cash, trips to Las Vegas and sundry other favors?

The FBI’s and IRS’s investigation might boil down to a wink and, especially, a nudge from Wesson to Huizar to suggest how they got away with it.

Before we dig-in, there are myriad examples of how Wesson has gamed virtually every facet of the public trust placed in him. Many of them were either originally or exclusively identified in this column, with the LA Times either sitting on those stories, or not knowing about them, until after they were published here. Among them are Wesson’s shady personal real estate transactions, and the misuse of public resources for personal benefit. And, like father, like son, both Wesson and his son (City Council Floor Director Justin Wesson) defaulted on their debts to the Discover Card, and appear to have repeatedly falsified their voter registration information, which is something Wesson had me thrown out of City Council meetings for raising during General Public Comment.

And then there is Herb Wesson’s ultimate motive; his persistent financial troubles, including repeatedly coming this close to losing one of his homes due to failure to meet his mortgage obligations. How someone sports a new Rolex, custom-made suits and dress shirts, and a collection of high-end eyewear while on the verge of foreclosure is anyone’s guess, and an investigators’ job, to figure out.

But dial the clock back to August 15, 2015, a time prior to the Fed’s recent raid of Huizar’s City Hall office and home, which led to Wesson stripping Huizar, his best friend, of his powerful Chair of the Planning and Land Use Management (PLUM) Committee. It was on that date that Huizar may have unintentionally tipped his hand on how City Hall corruption might work.

And the feds should zero in on it.

Huizar did this in a flowery, adoringly written column written by then-LA Daily News reporter Dakota Smith, who is now at the LA Times. In it, she fawns over Wesson, his daily bubble baths, obsession with colorful socks and how, as the son of an auto factory worker, he “tightens the bolts on his political reputation.”

Hey, way to dig in on the corruption, Dakota …

Among Smith’s words of adoration for Wesson is a nugget that became lost either to time or pressure:

“Illustrating Wesson’s role in running City Hall, when he wants a policy put up for a vote in City Councilman Jose Huizar’s land use committee, ‘he nudges me,’ Huizar said.

Wesson’s staff also met with Huizar’s office to discuss the new billboard ordinance, Huizar said. The law is being closely watched by billboard watchdogs after the sign industry spent more than $100,000 this election season supporting City Hall candidates and a ballot measure backed by Wesson.”

That right there is the key. The Wesson “nudge” of Huizar to get a policy advanced from Huizar’s PLUM Committee to the full City Council. In other words, while Huizar is too vastly experienced and educated to be Wesson’s pawn, he ultimately played the role of the puppet whose strings are pulled by Wesson.

Huizar, who has four young children and a world of trouble already on his mind, can be squeezed to flip on Wesson, nudges and all.

The feds should pressure Huizar to explain for which projects did Wesson nudge him, and then forensically dig into their personal finances, those of their family members, their campaign donations, their travel and meeting schedules, and to especially focus on whether those schedules were doctored, or if there were two sets of them, i.e. one kept to mislead the public on where Wesson and Huizar were, and with whom did they meet.

And by the by, the feds should look at who Wesson hired for his campaign to become the next LA County Supervisor from the Second District, namely local political stalwart John Shallman. A few years ago, I was repeatedly contacted by someone using multiple anonymous identities whose support of Janice Hahn for LA County Supervisor used virtually the same exact words – and several of the same electronic devices – as Shallman did in public, on-the-record quotes. I wrote about that charade in this CW column.

What should the FBI and IRS look for in that relationship? Stay tuned.

BONUS: Speaking of pawns, how about the embarrassing recent motion by the bright-eyed and always under-informed Councilmember David Ryu, resurrecting – only after the FBI raid of Huizar’s office and home – a bill that would make it more difficult for land developers to influence (read: bribe) the city’s lawmakers. It was Wesson who suppressed the idea for the bill when it was originally raised. As this column wrote previously, Wesson consistently courts “plausible deniability.” By having a bill that would make him look like a protector of the public trust, but sinking it for unspecified reasons, Wesson could say that he tried but failed to protect the public. But it wasn’t likely that at all.  It was Wesson’s attempt to lay the groundwork for a pre-emptive defense against a corruption investigation that has already led to the office of his chief of staff, Deron Williams. (Nobody has been charged with any crimes, to date.)

Why else would prior objections to the bill suddenly be no longer objectionable among the very same lawmakers who originally killed it? It can only be because the FBI finally put its cattle prod deep in City Hall’s collective rump roast. This is about Wesson, all day long. Look there, Feds. Look there.  And call me if you need the dots further connected.

(Daniel Guss, MBA, is a member of the Los Angeles Press Club, and has contributed to CityWatch, KFI AM-640, Huffington Post, Los Angeles Times, Los Angeles Daily News, Los Angeles Magazine, Movieline Magazine, Emmy Magazine, Los Angeles Business Journal and elsewhere. Follow him on Twitter @TheGussReport. Join his mailing list or offer verifiable tips and story ideas at [email protected]. His opinions are his own and do not necessarily reflect the views of CityWatch.) Prepped for CityWatch by Linda Abrams.