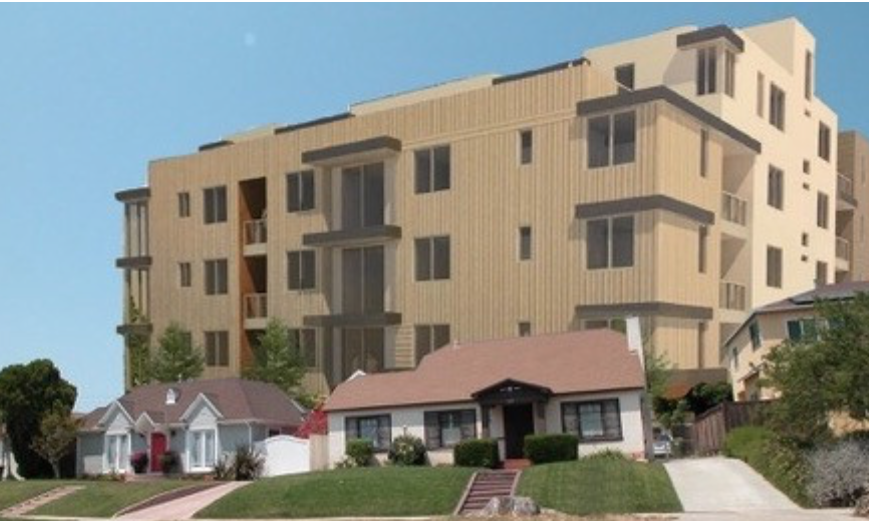 I began to attend local council meetings -- and I recently joined thirty of my Picfair Village neighbors in a trip to Van Nuys to address the City Planning Commission (CPC) regarding a proposed development -- pictured above -- in our community.

When I became a homeowner twelve years ago, there was a lot to learn about roofs and water heaters and mortgage refis, about foundation bolting and drought-tolerant landscaping. However, I never imagined the need to understand terms such as TOC, HPOZ, Q conditions, and up-zoning. The CPC is conversant in such arcana, which apparently explain why our lovely historic community is under assault by developers -- and why the commissioners easily discounted our opposition and speedily moved the development forward.

I believe this topic is of tremendous importance, not just to those in our neighborhood, but throughout Los Angeles as a whole. Bigger picture, it is an example of the great dangers of our electoral process, in which seemingly innocuous voter initiatives, crafted with cunning by special interests, yield a Pandora’s box of unanticipated consequences.

The development in question is on the 1500 block of South Orange Grove Avenue, a modest residential neighborhood one block east of Fairfax and two blocks south of Pico. The proposed structure is a five story, twenty-eight unit apartment building, replacing a single-family home and a duplex. It would be the tallest building in the neighborhood by two stories. The artist’s rendering above shows how it would impact the neighbors on the abutting block of Ogden.

Yet this particular building is only the first of many to come in Picfair Village and other areas throughout Los Angeles, transforming the character of our neighborhoods and adding boxy, out-of-scale buildings to a city already plagued by terrible traffic and failing infrastructure. Though the planning commission turns up its nose at the unappealing designs, they never fail to move the projects forward.

As the map below shows, 67 units have been green-lighted for that particular South Orange Grove block, with many more to come. In fact, since the map was created, four more properties have been sold, and several more projects are in play. Throughout the neighborhood, 867 units were planned, as of two months ago. By now the number will be even higher. 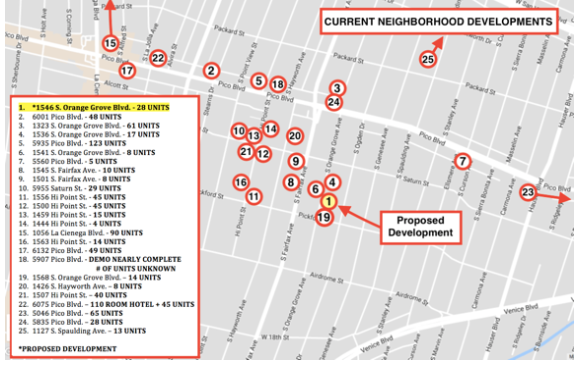 The bulk of this development is being done under the auspices of Measure JJJ, transformed by the City Planning Commission into Transit Oriented Communities (TOC) Guidelines. Shrugging their shoulders of any responsibility, the City Planning Commission’s members, along with City Planning Department staff (also busy with the equally pernicious Purple Line extension upzoning plan), fondly refer to the TOC Guidelines as “the will of the people,” washing their hands of responsibility.

Hidden deep in the text of this legislation was the definition of “Transit Oriented Communities (TOC)” under which developers are granted very attractive incentives, including a 70% increase in building height. This allows them to -- as they put it -- “stuff the envelope.”

What of Measure JJJ, passed in the Special Municipal Election two years ago, and now called TOC Guidelines? I have attached the voter information pamphlet, which innocuously claims the measure was intended to increase affordable housing and provide jobs for local construction workers. How heart-warming -- and deceptive -- that the endorsers of the measure in the voter information pamphlet were a plumber, an electrician, a veteran, a renter, and a first-time homebuyer. Had the developers’ support for the measure been more obvious, perhaps someone would have dug deeper?

Turning to the actual 31-page text of the ballot measure, page 22 brings us to the definition of Transit Oriented Communities. Most of us might imagine a transit center to be a METRO rail stop -- and there’s nothing in the text of the measure to disabuse us of that limited notion. Instead, in order to learn just what a transit center is, it refers us to another document: Subdivision (b) of Section 21155 of the California Public Resources Code. Once you locate it, it’s dense legal jargon (highlights added for your reference):

Seriously? A transit center is a bus line? City Planning has further interpreted this to be the intersection of rapid bus lines, which can be found at hundreds of points throughout Los Angeles. Can anybody imagine that electors knew what they were voting for? The true intent of this measure -- so artfully written by the real estate lobby -- was concealed behind a wall of subterfuge so effective that there was no warning from the media, except a few articles in CityWatchLA. I can find no Los Angeles Times article alerting the public to the consequences of this measure. Instead, The Times actually thought it might lead to a decrease in construction, by making it more expensive!

For whatever reason, City Hall and City Planning Commission members are embracing the TOC Guidelines and fully abetting developers’ plans to move full steam ahead with real estate projects that will drastically alter the character of our neighborhood and many others throughout Los Angeles.

The City Council, the City Planning Commission, and the Department of City Planning show no interest in pursuing other legitimate avenues, which could limit Measure JJJ implementation through the TOC Guidelines.

The most serious problems in Los Angeles are well known to all of us: traffic, homelessness, high housing costs, and failing infrastructure. Dramatically increasing residential density without addressing the other issues will aggravate already terrible traffic congestion, and place additional stress on our old infrastructure. Furthermore, many residents of rent-controlled units will be displaced, and they could become homeless. The cheapest of these affordable units are intended for individuals with incomes of $20,000 per year, so they are by no means homeless housing.

What about the issue of lowering housing costs? Market economics would suggest that if you increase supply, the price should come down. But there are many factors that impede that mechanism, especially the widespread use of AirBnB to fill vacant houses and apartments. Has enormous density led to low rents in Manhattan?

Let’s be clear -- the vast majority (85-90%) of these TOC units are being targeted to the luxury market, and the rentals will be expensive. Throughout the city, the vacancy rate in this segment of the rental market is already far higher than the vacancy rate in the affordable segment -- which is only about 1%. But few affordable units are in development, and there is no enforcement process to guarantee that affordable apartments remain affordable and are rented to those in desperate need of housing.

Attendance at local council meetings has risen dramatically as residents become more aware of the transformation developers and politicians are undertaking. At a meeting last month, I gazed out at a capacity audience, more than a hundred worried faces -- black, white, Hispanic, men and women -- mainly older, with deep roots in our city.

One gentleman asked a question. He explained he had a home with a small backyard. “My little space,” he called it. He asked if anyone could assure him that he would not one day wake to find a towering edifice erected next door, casting day long shade over his little space. No one could tell him that was impossible.

I bet that man knew a lot about termites -- about dry rot -- about root incursions in the main line.

Now he knows about up-zoning.

(George Crowder lives in the Pico/Fairfax area and can be reached at [email protected].)