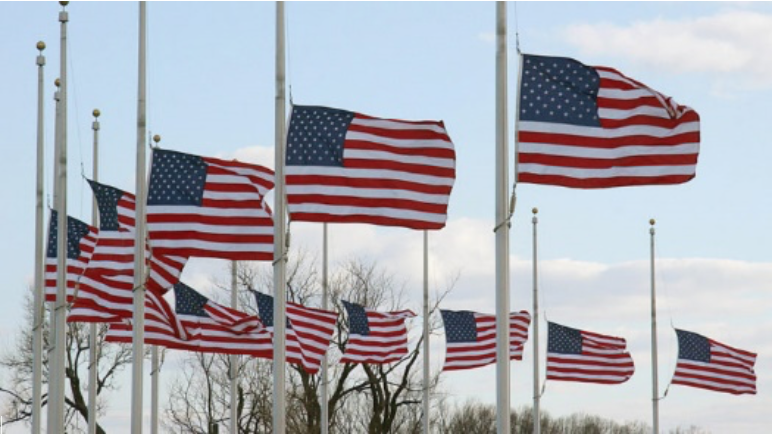 AT LENGTH--Once again our nation’s flags were flown at half-staff, a custom signifying untimely death of a large group of people or the death of one deemed a national hero.

This time, we remembered the death of 11 worshippers at the Tree of Life Synagogue in Pittsburgh, PA. They were murdered by another gun toting racist inspired by the same fear and hatred espoused and promoted by white nationalists, fueled by right-wing news pundits and the campaign slogans of President Donald J. Trump.

How many times have the flags been lowered since he took office? Too many to count. I’m thinking that our flags should be flown continuously at half-staff until this country can come to some sort of peace with itself.

Finding that peace could take some real doing at this point. The violence and threats of violence framing this election are meant to provoke fear— a fear amplified through uncivil media, a media that is in turn serving as provocation for acts of violence.

Clearly, Trump’s continuous campaign rallies are intended to agitate his supporters and release a deluge of delusional alt-right media assaults against Hillary, Obama or anyone else. They are being used to confuse the voters, incite hatred and breed fear. Trump doesn’t need help from Russian trolls at this point to do a better job of this. The results can be seen in the not-so-fake news of attempted bombings and mass shootings of the innocent.

When will it stop? Either we elect peacemakers and impeach Trump or we just get fed up with the killings and the stupidity.  We could use a national armistice, a peace treaty with ourselves, that says “no more.”

One hundred years ago come this Nov. 11, my grandparents witnessed the end of the first “Great War” with Germany. When the allied powers signed an armistice at the conclusion of this erroneously named “war to end all wars,” some 20 million combatants and civilians were dead.

This “armistice” only came after the long stalemate had enervated the economies of Europe, destroyed an entire generation of young men and elevated the United States to a military world power.  Peace only came after the countries could no longer justify the cost — in blood or money — of an extended war.

My Grandpa Charlie use to say, “If you took the profit out of war there wouldn’t be any.” He wasn’t the only one of his generation who thought this way.

Americans were not eager to join World War I. In fact, President Woodrow Wilson made keeping the United States on the sidelines of that war a major plank in his platform during his run for the presidency. When he was elected, and entering the war couldn’t be avoided, only 129,000 volunteered to fight. Wilson had to turn to a national propaganda campaign and institute a draft to put five million Americans in uniform to fight “over there” and maintain popular support by incarcerating those who opposed it.

Criminal syndicalism laws were passed during the war to suppress and silence its opponents and stymie the efforts of radical labor movements such as the Industrial Workers of the World.  Eugene V. Debs, the leading opponent of the war, ran for the U.S. presidency five times as a Socialist. The last time he ran, he campaigned from a prison cell. Debs was noted for his oratory. His speech denouncing the United States’ participation in World War I led to his second arrest in 1918. He was convicted under the Sedition Act of 1918 and sentenced to a term of 10 years in prison. His sentence was commuted in 1921.

All of this and much more should be remembered come Election Day Nov. 6 and  Veterans Day Nov. 11 as we memorialize our commitment to democracy and the Americans who have fallen to defend it. We must understand that for all of the pretense of patriotism and our arguments about taking a knee during the singing of the National Anthem, our nation has not always been “united with liberty and justice for all.” There have always been social democracy advocates who have pushed back against the corruptions of capitalism to gain worker and minority rights — social democracy advocates who are also patriots who have fought and died to make this a more perfect union.

One day, soon perhaps, we may reach that place as a nation when tolerance for the others who are not like us can be achieved; that we can actually live up to the creed in our pledge of allegiance and have “liberty and justice for all.”

Until then, the flags of our nation should be permanently raised to half-staff on a daily basis to reflect on our continued national state of mourning.

(James Preston Allen is the founding publisher and executive editor of RLnews, where this first appeared. He has been involved in community affairs for more than 40 years in the Los Angeles Harbor Area. His column appears in CityWatch twice monthly.)