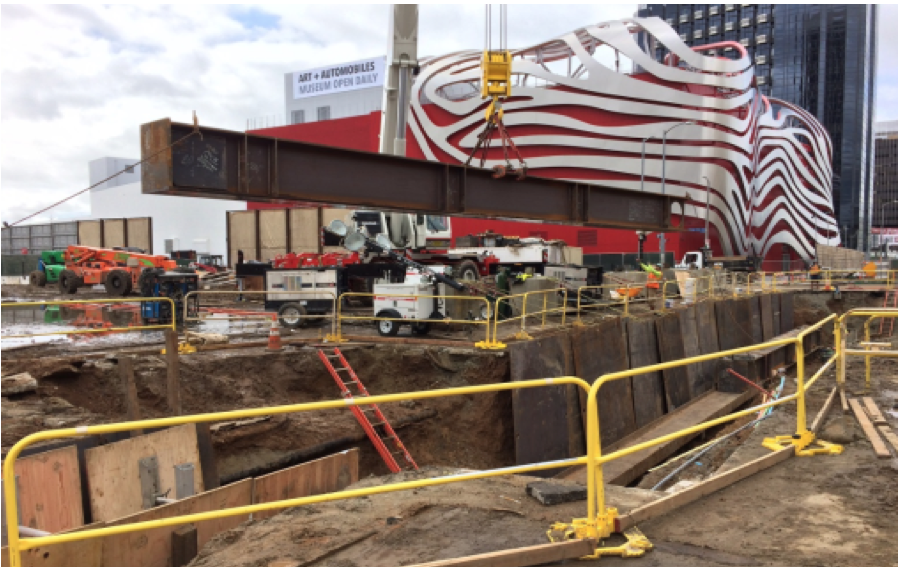 GUEST COMMENTARY--Neighborhoods are the backbone of every great city.

As they define themselves and push out the City continues to grow and prosper. Los Angeles is a city of great neighborhoods. They are different in many ways but each reflects the hopes and desires of those who pioneered them along with those who sustained them. Successive generations have dealt with the ebb and flow of market forces and strove to support their neighborhoods through volunteerism and good old fashioned hard work. The Miracle Mile is one such neighborhood and we are surrounded by other great neighborhoods and people who strive to do the same. (Photo above: Work on the Fairfax Station for the Purple Line in the Miracle Mile community.)

That is why several members of the Miracle Mile Residential Association attended the September 13thPICO Neighborhood Council meeting to support our neighbors to the south as they listened to staff from the Los Angeles Planning Department explain how the Purple Line Transit Neighborhood Plan (TNP) would affect their neighborhoods.

As the presentation wore on well over 120 people sat in disbelief as the plan was described to them. They were visibly angry that they were just hearing about the amount of density that could be added to their neighborhoods and being told that they were too late to have any meaningful input into shaping the plan. They were shocked to learn that a favorite area like Little Ethiopia on Fairfax was scheduled to get up-zoned in a way that could make it a thing of the past. But most just stared at the map in amazement and asked questions like: “What is going to happen to our neighborhoods? The streets are already so packed with cars that we can hardly go anywhere?” One neighbor complained about frequent power outages and asked what will happen to our electricity with that many more people moving in? That had heads nodding in unison around the room. Others mentioned crime, the broken streets and sidewalks along with the general breakdown of our Infrastructure systems.

There was an unmistakable feeling in the room that people did not believe they had a real voice in this plan. Many of these people had lived in the area for years. They had been through the ups and downs of urban transformation, quietly working to make their neighborhoods safe places to live and raise families. Now they were looking at a plan that would fundamentally change their neighborhoods and many would be forced out. That did not sit well with them.

After the meeting – with the enormity of the map changes hanging like a cloud over them – many asked me how this had happened. The only answer I could provide was that we had inadvertently done it to ourselves.  We had gone to the polls in November 2016 and overwhelmingly voted for Measure M, which extended the half-cent tax to add new transit projects and expedite others previously approved under Measure R. We also voted for Measure JJJ to facilitate the development of mixed income and affordable housing in transit areas.

Unwittingly, we had voted to pay for the destruction of our neighborhoods though Measures R and M and then handed the planning department the blueprints to do the job by approving Measure JJJ. Now, everything within one half mile of a transit stop was fair game to be up-zoned. There are very few places in Los Angeles that are safe from Neighborhood Transit Plans – and many that are at direct risk and people don’t even realize it yet.

TNPs came out of a 2012 partnership between the Los Angeles Planning Department and METRO “to encourage livable communities and employment centers around the region’s expanding transit networks.” But what these neighborhoods are being presented with would hardly make them livable.

METRO gave the City of Los Angeles $7.5-million through its Transit Oriented (TOD) Planning Grant Program to fund Transit Neighborhood Plans across the city. The stated purpose of these plans is to encourage mixed-use development, mixed-income housing, employment, and infrastructure in neighborhoods connected by the city’s transit network. That is not what the people at the PICO NC meeting saw – they saw the wholesale destruction of their neighborhoods.

To be sure there are those who applaud TNPs and all the other pro-density changes emanating from Sacramento and assorted regional councils. They are infused by the so called nobilityof their cause. They loudly advocate the need to build millions of homes for all those who are expected to arrive in California sometime in the future. Their battle cry is that there is no such thing as too much density and if we have to do away with single family zoning and put five-to-seven story apartment buildings on every lot, so be it. And anyone who opposes them is either a racist or selfish or a Nimby.

Those of us who have been here (through thick and thin) would like to be included in discussions about the future of our neighborhoods. We are owed that privilege. Many of those who attended the Pico Neighborhood Council meeting raised important questions about the lack of adequate infrastructure to sustain quality of life. They are not blindly rejecting density, because density itself is not the issue. The safety, security and well-being of the people are the issue. That must come first and then density can be rationally added with the full input of the community. Change is always difficult, but it will be impossible if jammed down our throats – and that was the case last week at the PICO Neighborhood Council meeting.

(James O’Sullivan is a long-time community activist and the President of the Miracle Mile Residential Association.)