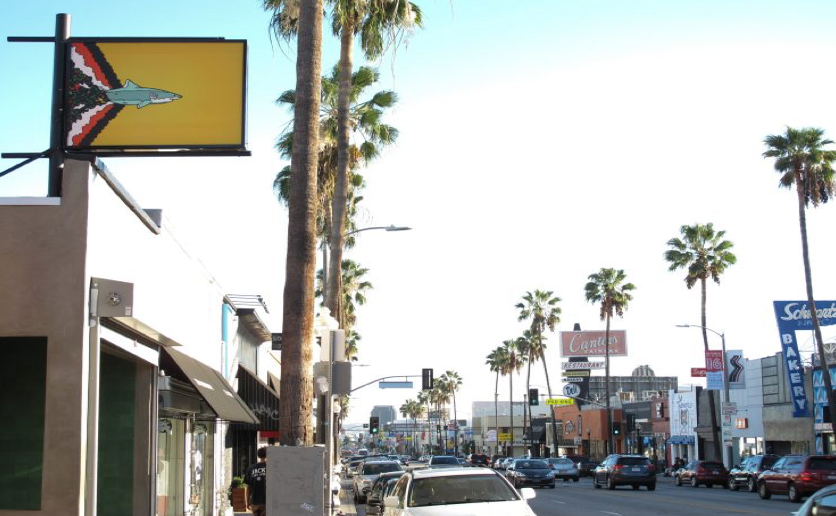 PLATKIN ON PLANNING-Take a good look at the photo above and you’ll see:

No shade trees. No bicycle lanes. No street furniture. Narrow sidewalks. Garish roof signs. Equipment blocking the sidewalk. In other words: Not quite ready to become a Transit Oriented Community.

To many people a walk down Fairfax Avenue brings forth nostalgia for Fairfax High School, Canter’s Delicatessen, bakeries, CBS Television City, the Farmers Market, and LACMA. Other people might like newer attractions, especially trendy clothing stores, The Grove, Whole Foods, and Little Ethiopia.

But, these destinations have a downside. They are in Los Angeles, and our public areas are imploding. As anyone who drives, takes busses, bikes, or walks in LA knows, decades of deferred maintenance are taking a steady toll on LA’s urban forest, sidewalks, parkways, and streets. They are in dreadful shape and getting steadily worse.

This is particularly ironic because Wilshire Boulevard bisects the Fairfax Avenue corridor. This is where LA METRO is busy spending $1 billion per mile to build the Purple Line Subway extension.  You might think, at $1 billion per mile, there is surely some loose change to fix Wilshire Boulevard and its intersecting streets and sidewalks. Isn’t this the obvious way to lure potential passengers – whether pedestrians, bicyclists, or car, bus, and uber users -- to the new subway? But, think again, since no planning or funding is devoted to repairing Wilshire Boulevard and adjacent feeder streets, such as LaCienega, San Vicente, Fairfax, Olympic, Pico, and LaBrea.

Instead, Metro’s gift to these areas, via the City of LA, is called the Purple Line Extension “Transit Neighborhood Plan” or TNP for short. As I have previously reported in CityWatch, this METRO-funded and City of LA-implemented proposal has nothing to do with transit, neighborhoods, or planning. It is strictly an up-zoning program to enable larger, taller, denser and, yes, more expensive real estate projects on the Wilshire, San Vicente, Fairfax, LaBrea, and Pico corridors.

The TNP is based on the ironic and spurious claim that these new buildings are necessary to increase transit ridership. Why spurious and ironic? Because the Department of City Planning, which is implementing METRO’s transit planning grant, has prominently posted two policy documents that advance a totally different approach to transit. In contrast to real estate schemes, these guides precisely describe the wide range of public improvements that are necessary to promote non-automobile transportation alternatives, especially transit.

These guidelines ought to be carefully followed, not replaced with short-term, speculative real estate projects. Unfortunately, these guidelines are totally ignored in City Planning’s “Transit Neighborhood Plan.” Instead, slap-dash up-zoning ordinances, that increase the height, density, and size of commercial and residential buildings on these corridors, are being rushed through for the City Council to quickly adopt them.

Furthermore, the TNP’s rationale is a sham. City Hall claims the TNP’s new buildings will increase the supply of affordable housing, even though the proposal undercuts LA’s two affordable density bonuses. If adopted, the TNP would grant real estate developers' projects additional height, density, and size -- without them including any affordable housing units in their projects.

The TNP’s other rationale is equally spurious: the claim that replacing existing buildings with new, upscale ones will increase transit ridership. Apparently METRO and City Hall have yet to notice that Purple Line ridership (like its companion Red Line) is decreasing, a direct consequence of building expensive transit-adjacent commercial and apartment buildings in Koreatown and Hollywood.

Fairfax Avenue is in Bad Shape:  This is what I discovered on my walk.

Tree Canopy: There is virtually no tree canopy on Fairfax Avenue, from Melrose on the north to Pico on the south. While most of this famous corridor lacks any trees at all, the scattered existing trees are either the wrong species or poor care has butchered and stunted them. This includes the 30-year-old Mexican Fan Palms near Canter’s. They are now mature trees, but their sole contribution to the walking environment is litter, not shade.

There are also scattered Ficus trees on the Fairfax corridor, as the photo below shows, but they mostly lift dirty sidewalks. As isolated trees, they do not create a shade canopy that shields pedestrians from LA’s sunny and increasingly hot climate. 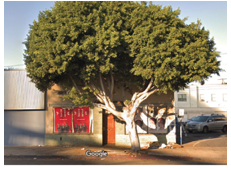 (619 S. Fairfax, a block from the new Purple Line subway.  Filthy, broken, narrow sidewalk, with a sole ficus tree in front of a boarded-up storefront. Not welcoming for a walk to the nearby subway, but just fine for new, up-scale, lucrative auto-centric mega-structures.)

There is barely any street furniture on Fairfax Avenue, such as matching trashcans, light poles, benches, and signage. This is particularly grating because Santa Monica Boulevard is close-by, and the City of West Hollywood has totally re-engineered this street, with coordinated street furniture.

Bus stops:  Fairfax Avenue has an MTA local (217) and express bus line (728). It also has a City DASH line running between Melrose and Wilshire. That said, bus stop amenities appear to be minimal and random. A few stops have bus shelters, a necessity in Los Angeles. Others have bum-proofed green benches. Others have both, while some bus stops are only a single pole, without any place for waiting bus passengers to sit or stand in the shade.

What this hodge-podge of different bus stops has in common though is the total lack of real time arrival information. Unlike METRO subways, there are no electronic arrival signs at any of these bus stops. Even sporadically posted bus schedules are hit and miss.

This leaves tech-savvy bus riders with the option of apps like Moveit, crossing their fingers they will get actual, not scheduled, bus arrival times.

Bicycle Infrastructure.  For part of my examination of Fairfax Avenue I also tried biking, and it was harrowing since there are no bicycle lanes on this street. For that matter, Wilshire Boulevard, LaCienega Boulevard, and LaBrea Avenue -- all part of the “Transit Neighborhood Plan” -- are also missing bicycle lanes, and none are planned in the foreseeable future. Ditto for 6thand 8thStreets, one block to the north and south of the new subway alignment. No bike lanes there, either.

The status of publicly accessible bicycle racks on sidewalks is also depressing. I did spot a few of them, but most of the corridor, as well as on intersecting commercial streets, lack bicycle racks. As for those who want to bike to subway stations, there are no facilities there to park bikes, either now, or in the future.

Furthermore, given the popularity of Bird and Lime scooters, there are no Fairfax Avenue places for them to park, either on adjacent streets or at transit stations. Like bikes, their riders will be forced to improvise, finding any nook or cranny to stow a scooter or lock up a bicycle.

My stroll down Fairfax Avenue clearly reveals that its wide spread infrastructure deficiencies create serious barriers to bus and transit use, as well as walking and bicycling. Furthermore, these same rundown infrastructure conditions exist on the other nearby corridors comprising the Purple Line’s “Transit Neighborhood Plan,” Wilshire, San Vicente, Pico, and LaBrea. They, too, are in dreadful shape and getting worse. Unless repaired and substantially upgraded, they will further deter walking, bicycling, bus riding, and subway use in these neighborhoods.

Negligence?  Is there a name for this negligence? To be charitable, we could christen it “reverse planning.” The solution, in this case speculative real estate projects, precedes any community analysis or subsequent monitoring.

We could be less charitable, though, and call it “garbage in, garbage out” planning. In this case flawed assumptions guarantee a flawed outcome: large, expensive buildings that enrich developers, but reduce transit ridership and the supply of affordable housing.

For those who argue that there is “just no money” to repair and upgrade LA’s public realm, we only need to examine the My Figueroa project connecting downtown Los Angeles to the USC area. The cost of rebuilding these four miles of Figueroa to encourage walking, bicycling, and transit – instead of driving cars -- is $20 million. This is $4 million per mile.

If we add in another million for inflation ($5 million per mile), the cost of re-engineering the corridors and neighborhoods near the Purple Line Extension are a small fraction of the $1 billion per mile METRO is spending on the new subway. The price for upgrading Wilshire Boulevard, from Highland Avenue to Beverly Hills, to prioritize walking, bicycling, and transit, is $15 to 20 million. If we include the other commercial corridors that the TNP would up-zone, the cost is less than $50 million. If we then add in the residential areas near the Purple Line for such transit-friendly improvements as sidewalk repair, tree planting, and bicycle infrastructure, the cost would be closer to $100 million, a tiny fraction the subway’s $8 billion plus price tag.

This is not rocket science. It is common sense, unless, of course, the public rationale for upzoning privately owned parcels near the Purple Line extension – increasing transit ridership -- is just window dressing for short-term, crony profiteering through real estate speculation.

(Dick Platkin is a former Los Angeles city planner who reports on local planning controversies for CityWatchLA.  Please send any corrections or comments to [email protected].) Edited for CityWatch by Linda Abrams.