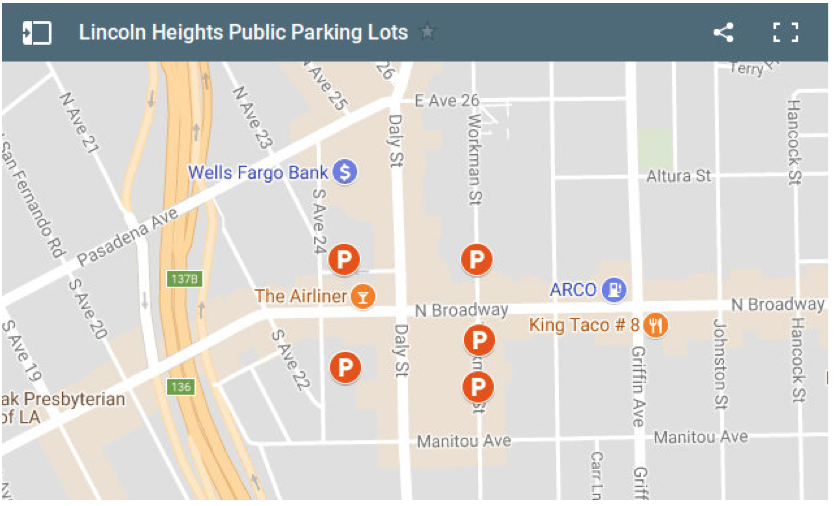 DUBIOUS DEVELOPMENT DECISIONS-It's clear that the City of LA needs to take action to deal with the homeless crisis.

Unfortunately, the Mayor and the City Council keep giving us reasons to doubt whether they're serious about tackling the problem. The roll-out of Mayor Garcetti's A Bridge Home initiative was badly botched, and the harder you look at the program the more it seems like the Mayor is clueless when it comes to the complex issues involved in building housing for the homeless.

And there were reasons to worry even before the Mayor's latest debacle. The people of Lincoln Heights have some serious concerns about the City's approach to building homeless housing in their neighborhood, and Councilmember Gil Cedillo hasn't helped matters. Five City-owned parking lots have been chosen for these projects (see map above), but community members feel they were shut out of the selection process. Worse, there are nagging questions about the City’s process for choosing developers to build on these sites, and there's no concrete information about how much of this housing will actually befor the homeless.

But let's back up a little.

In November 2016 LA voters approved Measure HHH, which would issue $1.2 billion in bonds to fund the construction of housing to ease homelessness. A little over a week after the measure passed, a memo was circulated by the Chief Administrative Officer (CAO), the Chief Legislative Analyst (CLO), and the General Manager of the Housing & Community Investment Department (HCID). The memo asked the City Council to approve a list of 39 pre-qualified developers for HHH projects, to okay nine project sites, and to instruct HCID to enter into Exclusive Negotiating Agreements with five development teams. Under pressure from the community, Councilmember Cedillo removed the five sites in Lincoln Heights from the list. Temporarily. But the City Council okayed the majority of the memo's recommendations.

Later, the five Lincoln Heights sites were restored to the list, with Cedillo’s approval. And this is the first problem. Of the nine sites approved, five of them, over half the total, are located near a short stretch of Broadway in Lincoln Heights. You might think our elected officials would want to distribute homeless housing more or less evenly throughout the City. Apparently not. This seems kind of odd in itself. But this is only the beginning.

Early in July community members gathered at the Lincoln Heights Senior Center where Susan Hunter, of the LA Tenants Union, gave a presentation on the process used to select the pre-qualified developers for these projects. Hunter asked some interesting questions about GTM Holdings, half of the team chosen by the City to enter into an Exclusive Negotiating Agreement (ENA) for the five sites in Lincoln Heights. First, what kind of company is GTM Holdings? Well, if you look up "holding company" on the net, here's the definition Wikipediaoffers:

Interesting. So what kind of business is GTM actually engaged in? In their Articles of Organization filed with the State of California in October 2012, here's how GTM's purpose is defined:

Huh. Kind of hard to say what that means. Hunter then asked: Does GTM have any experience building permanent supportive or affordable housing? Well, their website lists several affordable housing projects going back at least a decade. That sounds encouraging. The problem is, the earliest projects were constructed before GTM filed as an LLC in the State of California. So how is that possible?

On its website, GTM Holdings explains that it's become the successor to American Communities, an experienced affordable housing developer, and it seems GTM has taken over the other company's portfolio. The co-founder of American Communities, Mark Walther, is now CEO of GTM, and his bio makes it clear he has extensive expertise in building low-income housing. But the timing of Walther's association with GTM is interesting. The first document filed with the State that lists him as CEO is dated October 25, 2016. This is less than one month before GTM appeared on the list of pre-qualified developers with the recommendation that they be approved for an ENA.

But it seems that Walther's association with the company may have started a few months earlier. Campaign contributions listed on the City's ethics website show that he gave a total of $1,900 to Councilmembers Paul Koretz, Bob Blumenfield, and Gil Cedillo in June 2016, about five months before the CAO submitted recommendations for developers who should be favored with ENAs. Walther must really think Cedillo is a great guy, because according to the ethics website he gave the Councilmember another $700 in April 2017. It's important to remember that Cedillo represents Lincoln Heights, the community where GTM has been chosen to build on five separate sites near Broadway. Each of the filings shown on the ethics website lists Walther as "Real Estate Developer, GTM Holdings." And Walther seems to be well-connected to LA's political elite. The non-profit database GuideStar lists him as Principal Officer of the Getty House Foundation, which is the 501c3 that oversees management of the Mayor's residence.

Still, even if all these relationships seem a little too cozy and a little too convenient, does that really matter? The important thing is to build housing. Right? And this is all about building housing for the people who need it most. Right?

In the campaign to approve Measure HHH, the initiative was promoted as a way to build permanent supportive housing for the homeless. Some who voted for it have since expressed surprise that these funds are also being directed toward affordable housing projects. But the published description for HHH clearly stated that its purpose was, "To provide safe, clean affordable housing for the homeless and for those in danger of becoming homeless, such as battered women and their children, veterans, seniors, foster youth, and the disabled." Standard affordable housing projects can clearly serve the needs of low-income families who might otherwise become homeless.

But let's take a closer look at the CAO's November 2016 memo. Under Exclusive Negotiating Agreements it says, "These proposals include a mix of supportive, affordable and market-rate units." What?! How did market rate units get in there? The memo clearly identifies the locations chosen as Affordable Housing Opportunity Sites (AHOS). It also says, "The AHOS Initiative is the implementation of strategy 7D of the City's Comprehensive Homeless Strategy, which proposes the use of City-owned land for affordable or homeless housing." So how come now we're talking about market rate units?

In spite of all the impassioned rhetoric about building housing for the homeless, the upshot seems to be that City-owned land could be used to build housing for just about anybody. In March of this year Cedillo published a press release on his website announcing the signing of the ENA with GTM Holdings and WORKS. The second paragraph tells us, "As part of the Fiscal Year 2016-17 Adopted Budget, both the Mayor and Council affirmed the City’s commitment to addressing the housing shortage, proposing the use of city-owned land to build affordable or homeless housing." That sounds promising, but in the very same paragraph you'll find this sentence. "The RFQ/P allowed for other housing types to ensure a mix of units on sites with more than one parcel and also to ensure that the qualified list would identify developers for future City-owned sites for future development." In other words, they're still leaving the door open to market-rate units.

The Mayor tells us he wants to solve the homeless problem, but this just seems like another example of the old bait-and-switch. The politicians sell HHH to the voters by telling them it's a way to fight homelessness, and after the measure's approved we find out that market-rate housing has somehow worked its way into the mix. The politicians tell us they have this great plan to use City-owned property to build affordable housing, but now it turns out that these parcels could be used to build any kind of housing. And still nobody's explained why five of the sites, over half the total, are LADOT parking lots located near a short stretch of Broadway in Lincoln Heights. A quick search on the LADOT website shows that the City owns parking lots all over Los Angeles, including two in Larchmont Village. Were these two sites considered for affordable or permanent supportive housing? Guess not. Maybe they’re just too close to the Mayor’s mansion.

Is it any wonder that people in Lincoln Heights are angry?