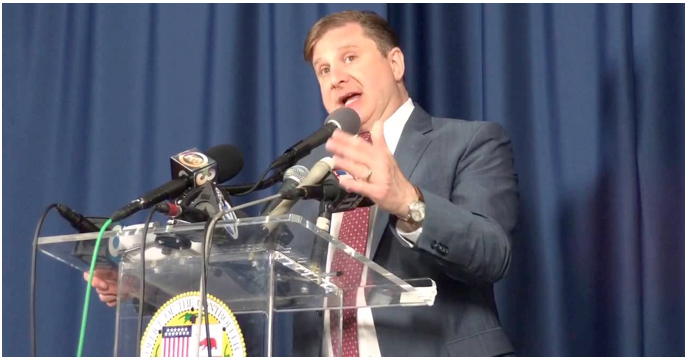 PERSPECTIVE--Controller Ron Galperin (photo above) has uncovered a gap in the City’s cash management controls.

The audit report, covering the issuance of Proposition O bonds, makes a case for the city to hire a real Chief Financial Officer instead of parsing out finance responsibilities to a mishmash of executives who appear to have trouble communicating with each other.

Bonds to fund various projects were issued way in advance of the commencement of actual work on projects dealing with water quality.  This finding raised a red flag and called into question the management of projects authorized under other propositions.

The net result was an average balance of $171 million in idle cash from 2010 through 2015 – idle meaning sitting in the treasury earning very little. All the while debt was serviced at higher rates. The negative margin was 1.9 points, which amounts to an average loss of $3.2 million per year. The actual loss was pegged at $54 million.

This is a loss of real dollars; the payments were unnecessary.

There is plenty of blame to go around.  CAO Miguel Santana either failed to perform basic analysis of the cash flows or did not understand the magnitude of the timing.

The Bureau of Engineering regularly failed to reasonably estimate project schedules, which led to the too-early issuance of bonds.

But there is one department that should share accountability – the Office of Finance.

Antoinette Christovale served as Director of Finance/Treasurer for 16 years, which happens to span the entire time the bonds were issued. I do not know what her specific duties were, but a treasurer would ordinarily stay on top of debt service and be involved in analyzing the need and timing of bond issues.

It appears that Christovale’s department failed to identify another problem.

In an audit report issued  June 2015, Galperin discovered $500,000 in payments to Wells Fargo Bank for check printing from February 2012 to March 2015.  The City prints its own checks.

Christovale retired in early 2016. She was replaced by Galperin’s Deputy Controller, Claire Bartels.

While the players may change, the organizational structure that led to this embarrassing lack of due diligence is still in place.

Better yet, let’s fold the Office of Finance and the CAO under an independent CFO with solid credentials. The City is an $8 Billion entity.  Only the most able executive should be trusted with its finances.