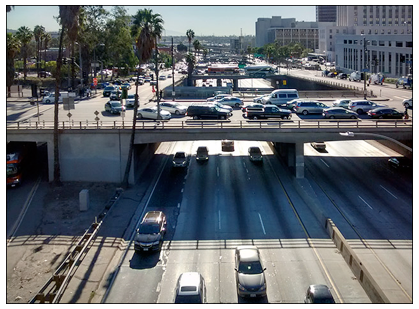 The photo above shows the heart of downtown Los Angeles just after the morning rush hour. Between Union Station and La Placita on the one hand, and City Hall, along with various administration and court buildings and the financial center on the other, lies this concrete trench (crammed with cars), spanned by bland concrete bridges (crammed with cars), leading to streets crammed with cars.

While some of downtown, notably Spring, Broadway, and Seventh, are alive with human beings walking to work, shop, or dine, too much of it looks like this. Angular gray expanses of asphalt and cement, filled with thunder and smoke and little metal cells holding fleshy work units. When Le Corb touted the glory of the automobile, he did not foresee this bland desolation. But eighty years of trying to make room for cars created exactly that: a place that no one wants to look at and where no one wants to stay.

You think platoons of robocars will solve the problem? They may make it appear more acceptable, and not-so-eventually, they will expand like any gas to fill all the available space. They might be able to drop you off in front of any door you choose -- but then, how likely will you be to discover a door you didn’t even know existed as you walk from a parking spot, or, better yet, from a transit stop or bike corral where you have arrived in the company of your unknown neighbors?

The pollution cars bring might be the least of our worries. Car culture infects you with a stultifying inertness. The only energy you have left is to curse your neighbors who are hidden in their own cars all around you. In a city where people travel by transit, foot and bike, transportation itself becomes a vast and highly-efficient “third place.”

Walkable cities, as Richard Florida noted a couple of years ago, foster democracy.  Cars foster atomized populations easily controlled by demagogues haranguing them over their car radios for four hours a day.

But we don’t have to live in desolate isolation. It’s only a habit at this point. And habits are made to be broken.

(Richard Risemberg is a writer. His current professional activities are focused on sustainable development and lifestyle. This column was posted first at Flying Pigeon.)  Edited for CityWatch by Linda Abrams.