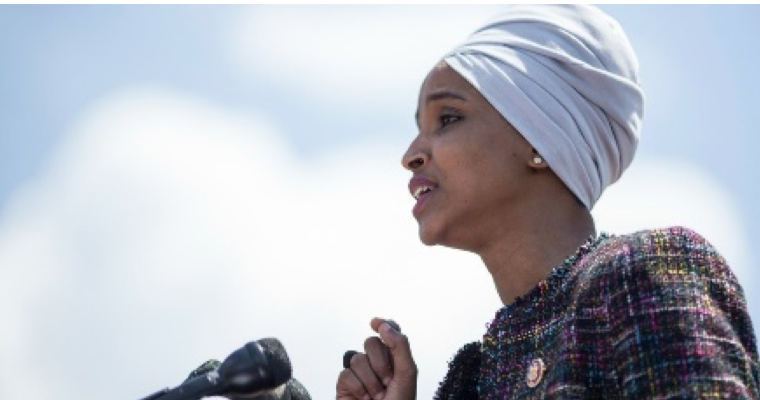 MAKING AMERICA HATE AGAIN-Liz Sawyer at the Minneapolis Star-Tribune reports that the Twitter account of Danielle Stella, the Republican challenger to Rep. Ilhan Omar (D-Minn.), has been shut down after she called for her opponent to be lynched.

Stella managed to combine the worst excesses of Jim Crow punitive policies toward the African American congresswoman with the most egregious Islamophobic lies. She alleged, with no evidence, that Omar had passed sensitive U.S. government information to Iran, and that if so, she should be hanged as a traitor.

Stella responded to the ban by accusing Twitter of being a supporter of terrorism and pedophilia.

Her case shows how problematic is the decision of Facebook's Mark Zuckerberg to allow political campaigns to lie at will in their paid advertising on that platform. Presumably Stella could still put her putrid and entirely false allegations into a Facebook ad with no repercussions.

Stella seems to have a morally corrupt soul and so I'm not sure it will do any good, but maybe we could begin by explaining that Somalis are Sunni Muslims who have no affinity for the Shiite government of Iran. Most Somalis are moderate Sufi Muslims, and while I don't know for sure, that is likely Omar's own background. Iran persecutes Sufis and discriminates against Sunnis. The fundamentalist extremists in Somalia, the al-Shabaab, are linked to Saudi Arabia, a major foe of Iran.

Omar's family fled the instability created by groups like al-Shabaab, and she is perhaps the only refugee presently sitting in Congress—Sen. Marco Rubio (R-Fla.) lied about having that status.

The insane conspiracy theory into which Stella bought was spread by the so-called Foundation for Defense of Democracies:

The FDD is dedicated to getting up a war by the U.S. on Iran and was bankrolled by the U.S. Israel lobbies, spearheaded by wealthy families such as the Abramsons and the Bronfmans.  Omar has been critical of the way the Israel lobbies have skewed U.S. foreign policy. They are of course welcome to campaign against Omar but spreading these kinds of lies is unacceptable and she should sue FDD.

Whereas Omar has been unjustly condemned as an 'anti-Semite' merely for bringing up the effectiveness of the Israel lobbies' spending on shaping U.S. government policy (an effectiveness that AIPAC boasts about), editorial boards and congressional caucuses somehow haven't attacked Stella for her Islamophobia.

The allegation Stella made is profoundly bigoted, since it just sweeps all Muslims up into an undifferentiated mass and tries to tag them with Iran, one of the few Muslim states with which the U.S. has bad relations, as Omar herself implied in her rebuttal:

I'd like to point out that Egypt, Jordan, Bahrain, Kuwait, Morocco, Pakistan, Afghanistan, and Tunisia have all been named by U.S. presidents as "Major Non-NATO Allies," with whom we do joint military exercises and to whom we offer sensitive military technology. In addition, Turkey is a NATO ally and the U.S. has close military and security cooperation with Saudi Arabia, the UAE, and Qatar. The U.S. strongly supports the Federal Government of Somalia and has given it $3 billion in aid. The Republicans are just trying to substitute Muslims for the old bogeyman of international Communism, but it won't work because most Muslim countries are strongly allied to the U.S., not something you could have said in the old days of the Soviet Union and its allies. Hence their focus on Iran, which is an outlier among the 50 Muslim-majority countries in the world.

As for hanging Omar, Stella put her foot in some very unpleasant excrement by talking in those terms. In the era of Jim Crow to which the Roberts Court seems to want U.S. to return, African Americans like Omar were denied access to public schools and other facilities and were often de facto denied the right to vote. In that era 1882-1968, 3,446 African Americans were strung up and lynched. Often their crime was not to shuffle and put their heads down in front of the caste of dominant whites, the same charge leveled against the uppity Omar. Some white people were also lynched, often for standing up for African Americans.

(Juan Cole teaches Middle Eastern and South Asian history at the University of Michigan. His new book, The New Arabs: How the Millennial Generation Is Changing the Middle East (Simon and Schuster), will officially be published July 1st. He is also the author of Engaging the Muslim World and Napoleon's Egypt: Invading the Middle East (both Palgrave Macmillan). He has appeared widely on television, radio and on op-ed pages as a commentator on Middle East affairs and has a regular column at Salon.com. This piece appeared on CommonDreams.org.) (Photo: Zach Gibson/Getty Images) Prepped for CityWatch by Linda Abrams.