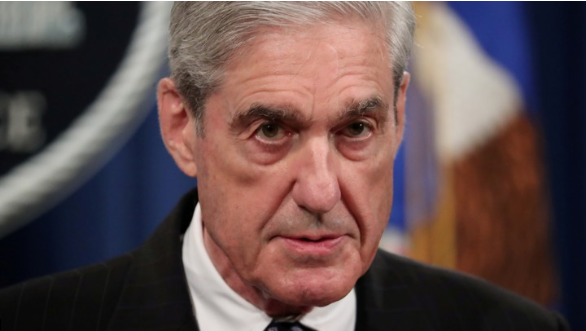 VIEW FROM HERE-According to a recent study by the Bureau of Labor Statistics, Americans spend an average of 16.8 minutes a day (or 0.28 of an hour) reading on their own volition for purposes other than work or school.

In a different study reported on by The Atlantic, "Over the last 8 years, all the new, non-TV things -- Facebook, phones, YouTube, Netflix -- have only cut about an hour per day from the dizzying amount of TV that the average household watches. Americans are still watching more than 7 hours and 50 minutes per household per day."

To state the obvious, that is, what we already know without needing expensive surveys, is that Americans read less than they ever have. That being the reality, in order to capture the public's imagination, one must say it or show it. This must be done more and more on a social-digital platform. Given where our culture has arrived, it really doesn't matter how well written the Mueller Report is. It could be better than War and Peace and not matter, not really. Not if less than 1% of the nation is going to take the time to absorb it in that medium.

Let's be honest. Most Americans don't even have the attention span required to get through the highlights of the report. Most Americans didn't even take the time needed to finish William Barr's 4-page synopsis. Why read when you can turn on CNN or Fox News for the "important" analysis and easy to digest soundbites? Why work when so-called experts are all too eager (not to mention paid enormous salaries) to do the heavy lifting for you? It's even better if their interpretation reinforces what you wanted to believe already.

In an audio-digital-visual society, it is not good enough to just say, "my testimony is the report." Sure. It was a meticulously assembled report, one made by a master craftsman of the legal arts. It deserves to be read by millions. Be that as it may, it is not realistic to expect Americans to do what he is telling them to. Americans don't read. They sure do not read government reports.

In less than 20 minutes, Mueller could have explained to the American people exactly what he found out about Trump's efforts to obstruct justice. In less than 20 minutes (think how the former Marine commander must have been able to condense his orders to his platoon in combat) in front of the cameras, before the entire nation, in a medium that actually reaches people where they are, he had an opportunity to shape the people's capacity for action and judgment, Mueller could have explained what those infamous 10 episodes of obstruction were, why he thought they may have broken the law, and what exactly he wants Congress to do about it. To begin with, he could have made the very simple case for White House criminality by explaining how it is that President Trump's mistreatment of Attorney General Jeff Sessions amounted to obstruction. Lost in the fog of this seemingly endless debate, is the incontrovertible fact that Trump did not want Sessions to recuse himself and attacked the man viciously for not doing so. Why did he want Sessions to not recuse himself? Everyone knows it is because he wanted Sessions to either end the Mueller investigation or manipulate its process and conclusions. As the President himself likes to say: game over.

Instead, we got 10 minutes of Mueller basically saying he doesn't want to talk about this national crisis anymore. Basically, as I heard him speak, it sounded like he wanted to pass the baton to some other entity and just get on with his life.

Unfortunately, the one sentence in his press conference that he wanted to say provided both sides with an opportunity to co-opt it for their own agenda. The line, of course, was: “If we had had confidence that the president clearly did not commit a crime, we would have said so.” Democrats heard that Trump committed a crime. Republicans heard Mueller refuse to use the words 'exonerate' or 'guilty.' What should have been a definitive statement that helped set the record straight, became a hollow expression spoken from the mouth of a weary prosecutor just ready to call it a day. At the end of his presentation, (what should have been a present to the nation) Mueller did nothing to shift the public debate. He said, “when a subject of an investigation obstructs that investigation or lies to investigators, it strikes at the core of their government’s effort to find the truth and hold wrongdoers accountable.” Was that the president? If so, how and when? Tell us. Teach us. Share what you discovered in a way that will help people understand what actually happened.

Enough beating around the bush. Just say what you want to say and do it on camera in a way that is not ambiguous. The country needs it. It's the only way that we will be able to make sense of this information and act accordingly.