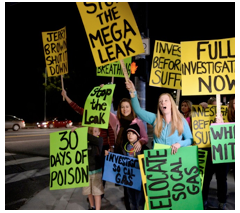 INSIDER REPORT-The distinct smell of natural gas penetrates homes for miles around the leaking Aliso Canyon natural gas “storage facility.” By storage facility we mean an abandoned oil well drilled in 1955 that So Cal Gas decided to fill with pressurized natural gas. But to describe this as a leak is akin to calling the BP oil spill in the Gulf of Mexico a leak.

Since October, Aliso Canyon has been hemorrhaging 50,000 kgs of natural gas into the air of Porter Ranch. Think BP oil spill with natural gas in a residential neighborhood and you start to understand that this, the worst gas leak in California history is a bonafide un-natural disaster. Lest you think that is hyperbole, renowned environmental advocate Erin Brockovich recently penned an article entitled, “Porter Ranch gas leak a catastrophe not seen since BP oil spill.”

This past week, seven weeks after the leak was confirmed, and after seeing attendance plummet, teachers getting sick, and visits to the nurses office skyrocket, CastleBay Lane Charter School and Porter Ranch Community School were ordered closed by the Los Angeles School Board. The 1100 students and staff will now be relocated to schools in Winnetka and Northridge respectively. “Porter Ranch will be a ghost town soon,” said a dejected Ankana Jitsomwung La Salle, whose son Chance is among the children suffering health effects and has been relocated.

As this crisis deepens, the community and elected leaders are beginning to ask, “Where has Gov. Brown been?” His office has been conspicuously silent.

“In this chaotic crisis, one of the most disruptive environmental and community catastrophic events of our time, we need our Governor to speak up, speak out, and bring the full force of his office to help the families impacted,” said LA City Councilmember Mitchell Englander. Englander has attended several town hall meetings in the area and the Porter Ranch Neighborhood Council meeting on the issue. Each meeting brought overflow crowds to venues that could hold well over 1,000 people.

As this crisis deepens one has to wonder when this nightmare for Porter Ranch residents will end, and when our Governor, who declared a State of Emergency in San Bernadino due to the terrorist attack, will step up and help the thousands who are waiting to evacuate the poison entering their homes from the Aliso Canyon catastrophe.

(Jim Alger is a long-time political activist. He is perhaps best known for spearheading the ‘pushback’ effort that culminated in the MOU Agreement between Los Angeles neighborhood councils and the Department of Water and Power. )