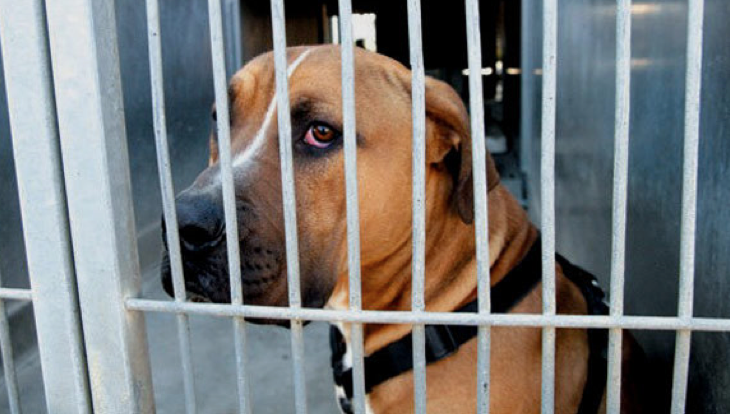 ANIMAL WATCH-Katy Todesco would be 16 years old now if a Pit Bull-mix in Simi Valley, CA, just north of Los Angeles, had not stolen her life.

Pit Bull attacks have reached an epidemic level but are still treated as “normal” events by Animal Services departments and politicians across the country.

There is nothing normal about a little girl dying in the arms of a mother who is trying to stop a Pit Bull from crushing her child's skull. That is what happened to Katia Todesco in 2008. Katia and her daughter, Katy (short for Katya), were visiting their landlady, who was also a personal friend. Katia said she had gone into another room, believing that Katy was in the kitchen saying "hello." (Photo: Pit bull that killed Katia Todesco.)

What she did not know was that the landlady had taken Katy into the backyard, along with her teenage daughter, to see the dog for which they were caring, and which allegedly belonged to the girl's boyfriend. (Katia said she later learned that the Pit Bull's owner was reportedly in prison.)

She heard Katy screaming and ran outdoors and saw her face, hair and body covered in blood. She grabbed the head of the Pit Bull, which had Katy's face in his jaws, to try to make him let go. She said she heard her daughter's skull cracking and then sounds from the dog's mouth like "chewing on fresh meat" -- which was Katy's flesh.

When someone finally pulled the dog away, she heard her Katy softly say, "Momma." She said her daughter died at that time. She felt her take her last breath.

Katy was transported to Simi Valley Hospital and then transferred to Children’s Hospital Los Angeles. Although the hospital put her on resuscitation machines which breathed for her two more days, her mother believes – knows -- Katy was gone on September 23. She said the doctors needed to prove they had done all they could, but Katy never responded, and on September 25, 2008, they stopped the artificial life they had been pumping into her daughter's body.

Ventura County Animal Control impounded the dog and Katia said another nightmare began for her. She was so numb physically, mentally and emotionally that she could not think or express herself, and the officials created a story that her 5-year-old girl had "bumped into" or "maybe stumbled over the dog who was asleep and frightened him" as the cause of the attack.

She said she did not believe her friend intended for Katy to be harmed, so she agreed that it was an "accident" when she spoke to the press. She had no knowledge of the breed of dog and certainly her friend did not intentionally cause the attack. However, soon the officials accused her of negligence in not protecting her daughter and putting her child at risk.

IF KATY WERE STILL ALIVE...

Katia is gentle and soft-spoken, with a slight accent. She has no other children. Her daughter would now be 16. I asked her what she thought Katy would be doing. She said she would have enjoyed her Quinceañera (a joyous, colorful ritual observed in many Latin countries to celebrate a girl's 15th birthday and her passage into womanhood.) She added that 15 doves would have been released in honor of Katy beginning adulthood.

Katy was a first-grader at Crestview School in Simi Valley at the time of her death. She loved to study and learn and also to dance and wanted to be a teacher and dancer, but experience and exposure to life could change that. So she hoped Katy would be preparing for college and enjoying the adventures of growing up and considering all her options.

There was no blame or self-pity in Katia's voice, but there is the sadness which she said comes with reliving that day continually and is true of every "survivor." She hopes that the issue of having Pit Bulls as pets in yards and neighborhoods will be taken seriously to end the senseless mauling and deaths of innocent victims of all ages.

Colleen Lynn of DogsBite.org writes, The Simi Valley police did not release information about Katya Todesco until six days after she was attacked and three days after she was pronounced dead. It appears the department failed to follow “standard protocol in this matter."

She questions the comments of Ventura County Animal Control Director Kathy Jenks, who, although she told the press, "Pit bull attacks are reported much more frequently than those by other breeds of dogs," then joined with officials from the Humane Society of Ventura County in stating, "The lesson is that it's not safe to leave young children with any breed of dog."

"The greatest myth we have perpetuated in this county is that children and dogs belong together," Jenks said. "Dogs, no matter what breed, do not see children as humans."

Colleen Lynn asks, "If all dog breeds did not see children as humans, how many dead children would be reported every 24 hours?

She continues, "Jenks is clearly a pit bull apologist. Even in the wake of a 5-year old's face getting ripped off and killed because she "bumped into" the dog, the director of the Ventura County Department of Animal Regulation would have the public believe that dogs of all breeds are as deadly as pit bulls." (Read more here.)

KATYA'S ORGANS DONATED -- 'Can I listen to your heartbeat?'

On December 14, 2010, the Daily Mail published the inspiring and touching story of the donation of Katya's organs and the four lives this "gift" saved.

It described, "The extraordinary moment a dead girl's mother heard her daughter's heartbeat again. . . in the chest of a transplant boy." Katya's heart, kidneys and liver were donated to three children and one adult through the One Legacy donor program.

Her heart was donated to Kyle Martin, 7, who suffered from restrictive cardiomyopathy, a condition that did not allow his heart to properly fill with blood. Kyle was given only two years to live without a transplant. His thankful mother, Lina Martin, said, "We have been given a gift beyond measure. Beyond anything we can ever repay'."

On January 18, 2017, 11-Alive reported that around 7:30 a.m. on January 17 a number of young children were walking to F.L. Stanton Elementary School in Atlanta, GA, when a Pit Bull suddenly attacked them.

Syrai Sanders, 5, was seriously mauled on her face and transported to the hospital for surgery. At least two other children were injured; and a little boy, Logan Braatz, 6, was rushed to Grady's trauma unit, where he died.

Shamonte Clayton, who lives nearby, said there were two Pit Bulls. He said he didn't see the initial attack but came outside when he heard screams. He said he "ran off a dog standing near the little boy's lifeless body."

"The mother was standing there screaming. She couldn't pick the child up, so I picked his body up and carried him to the ambulance," Clayton told WXIA.

"Why are you letting two full grown pit bulls roam this neighborhood freely when the neighborhood is full of elementary school-aged kids," Clayton asked rhetorically of the owner. One dog was shot, and another was captured and impounded, according to the report.

Investigators identified Cameron Tucker as the owner of the dogs. He was arrested and charged with two counts of reckless conduct, which are misdemeanor charges. According to 11-Alive, on Wednesday morning, Tucker remained silent as a judge ordered a bond of $70,000 for reckless conduct and an upgraded [felony] charge of involuntary manslaughter.

Tucker's attorney said the dogs got out accidentally; however, neighbors said the dogs frequently roamed the neighborhood. Another neighbor, Angie Smith, said she saw the dogs roaming on Saturday but didn't call anyone.

A witness told WCNC, "The child and a dog were playing tug-of-war with the baby [Syrai Sanders] and the dog actually won the fight. He ripped the baby out of the child's hand and kind of just slung her around." Syrai was transported to the Children's Healthcare of Atlanta at Egleston.

"We had some brave kids, some kids ran back to the scene to pull the dogs off the children that were injured," he said. Her grandmother said that Syrai was one of those who tried to protect the boy who later died.

A vigil was held in Atlanta to mourn 6-year-old Logan Braatz, killed in the pit bull attack and a Go-Fund-Me page was posted to pay for the child's funeral expenses.

On March 20, 2017, ABC 13 reported that when Syrai Sanders, 5, went home after spending two months recovering from the attack, she had the surprise of her life when former NBA star Shaquille O'Neal paid her a visit - with a hug, kiss and a special treat.

Shaq had visited Syrai and her family at the hospital after he first heard about the attack and had been helping the family since then. But on that day, they all went shopping for brand new furniture.

The family states that Syrai underwent eight surgeries and may need more.  She has a long road ahead to complete recovery.

Shaq said that he just wanted everything to be more comfortable for her when she got home. He plans to stay in touch with the family.

ANOTHER CHILD DIES THIS WEEK

A 4-year-old Michigan boy was mauled to death on Tuesday evening by a 60-pound pit bull which was being fostered by the family for a friend, and reportedly had not shown any prior aggression.

Officers responded to a 911 call from a home in Hazel Park -- about 10 miles north of Detroit -- at around 7 p.m., Fox 2 reported, and saw the dog attacking the boy inside.

They used Tasers to subdue the dog and free the child, who had severe wounds to his body and neck. The dog had also inflicted non-life-threatening injuries to the boy’s mother, as she fought to save her son.

The family issued a statement to the media, asking for privacy to grieve and reading (in part):

"On October 29, 2019, we experienced a family's worst nightmare when a dog took the life of Benjamin Cobb.  No words can ever explain the depth of our love for him. This has taken an unimaginable toll on our family, friends, and those who knew our sweet boy. A kind gesture to help a friend in a time of need, for a dog that was said to have never shown aggressive behaviors has turned into a horrifying loss for our family.

The boy was rushed to a nearby hospital where he died, according to Fox 2. The dog was taken to a veterinarian and euthanized.

This is not a fundraiser nor does the organization collect data. The group states:

To date in 2019, someone has been killed by a pit bull on average every 11 days. In the first 6 months of 2019, pit bulls killed more people than Dobermans killed in 60 years.

The group needs 100,000 signatures by November 21, 2019, to get a response from the White House and is asking for readers' consideration of signing the petition, shown here.

STOPPING THE EPIDEMIC OF ATTACKS

We must stop this epidemic that is spreading throughout our country and is, sadly, promoted by some of the major humane organizations in assuring pet owners and adopters that pit bulls are "just like other dogs."

The incidents that we have just reviewed are not typical of "other dogs." Local governments and officials are afraid of political backlash and refuse to enact sound laws for the ownership of pit bulls (a breed-type developed for dog fighting, not as pets.)

It is time for everyone to speak for the victims -- animal and human -- and demand that the senseless deaths by attacks on helpless children like Katy Todesco, Logan Braatz and Benjamin Cobb  and the months of suffering endured by Sarai Sanders and hundreds more must stop.